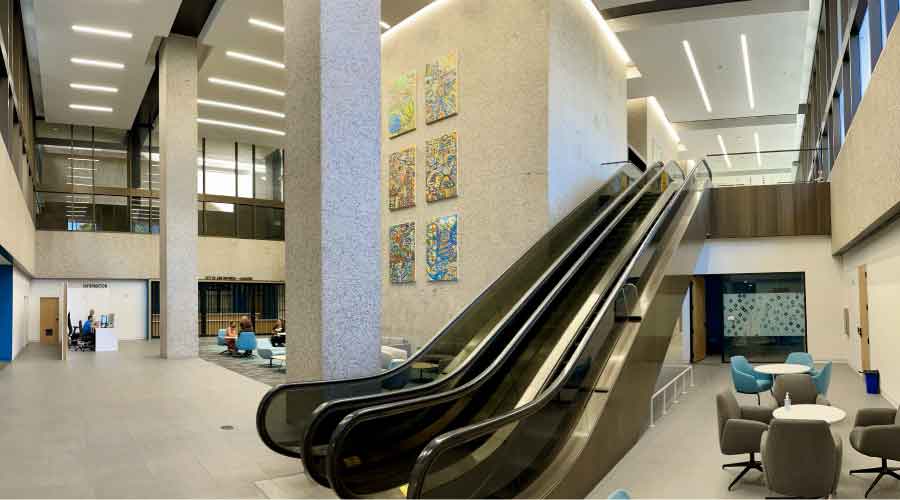 In 2018, after a decade-long search, the city of San Antonio finally found a facility to centralize its government agencies when it secured a 15-floor downtown office tower built in the 1970s and formerly owned by Texas-based Frost Bank. The purchase helped the city accomplish a goal it pursued for years.

“They wanted it to be easier for the community to access, promote more collaboration and efficiency within their own departments, have people closer together, and then just allow people in to have a more centralized location to go for their services, as opposed to having to go to multiple locations across the city,” says Kimberly Mercer, real estate strategy and planning director for PDR, an interior design firm that worked with the city on the tower project.

While San Antonio finally had found a new home for its agencies, the work was hardly over. Transforming the building from a bank to a government facility was next. Among the challenges for interior designers was keeping employees and visitors safe from violent events such as mass shootings and dealing with changing workplace trends due to the COVID-19 pandemic.

As maintenance and engineering managers have learned over the years, no institutional or commercial facility is immune to active shooter incidents. Elementary schools, places of worship, malls and movie theaters— the list of facilities impacted by gun violence is long.

When the city started to retrofit the tower to meet its needs, planning for the security of the building was of top priority. Managers had to determine the levels of access employees and residents would need inside the building.

One of the first steps designers took was to determine which agencies needed more public access than others. The strategy was to make agencies that see increased public traffic more accessible. 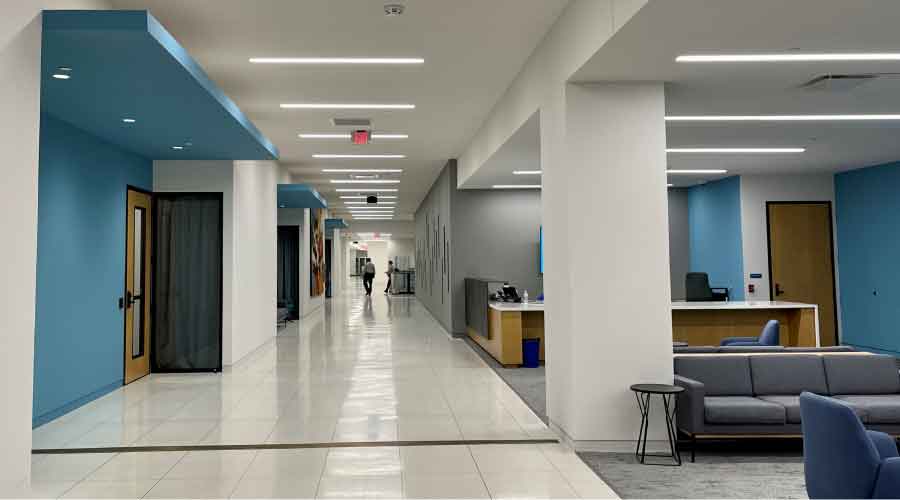 “We went through several iterations of bringing all the different departments together and looked at how they cross-coordinate with each other to figure out who to coordinate with whom,” says Jeff Knippel, capital programs manager for the city’s Public Works Department. “Obviously, a piece of that pie was those who coordinated directly with the public. So, you’ll find that public-facing entities are essentially along the concourse level, to try and avoid a lot of folks going into the building.”

As a government building, controlling access to certain areas and agencies was an important part of planning the building layout.

“One of the security barriers are metal detectors and security at all entrances,” Mercer says. “It is a public building, and similar to other public city buildings, especially in the last 5 to 10 years, there’s been a big uptick in making sure that you can screen people as they come in.”

The previous tenants of the building did not have as complex a security system in place as the city was planning to install. San Antonio was tasked with the challenge of installing a card access system in a building that didn’t previously have one.

Adding to the building security challenges is an adjacent public parking garage attached to the tower.

“There is also an underground tunnel that runs from the building over to another building for folks to get from their complex up to the parking garage,” Knippel says. “So subtle facets of trying to just make sure you can segregate those different kinds of places for security.”

Secure buildings should always be a priority for all organizations, but considering the rise in mass shootings, the emphasis has never been more critical.

“People bring guns into these kinds of facilities,” Mercer says. “That hadn’t necessarily been a big threat before. Some of that definitely came into play during this project. With current events, I think it’s the state of the world – making sure and having that protection and security for your employees, so they feel comfortable.”

When the city’s agencies were located in different buildings, the office settings were mostly traditional. Employees had their own individual offices where they could close doors or isolate themselves from co-workers for meetings or to work on projects.

Those settings all changed when the agencies moved to the tower.

“My counterpart ran the portion of getting with the right departments and informing them and orchestrating them on who was going to sit where,” Knippel says. “Some of the bigger challenges in this political perspective was trying to figure out who’s going to sit in what seats. That was a huge endeavor. And then just going from buildings where people have their own individual offices where they can shut the door to an open floor concept where only senior executives have offices, that in itself is a big cultural change that everybody’s having to adapt to.

“Then, of course, what happened during COVID. So that had a significant change in the way we actually even configured that open-floor concept, going from our best, tight-packed configuration to a more open configuration workstation.”

Fortunately, the pandemic did not have the impact on office designs that it did at many other facilities. The city was already planning to take more of an open-seating approach for agencies in the tower.

“They already had an approach to do flexible seating,” Mercer says. “We set that framework up for the city. What I think the pandemic did was change the ratio of how many people were assigned to a seat and work in a way that was very much the same as it has always been to more people working in a hybrid environment.

“They had a few people in the city that qualified as remote employees, so they worked from home most of the time. That number also shifted as they realized during the pandemic that some individuals worked really well from home for focusing.” 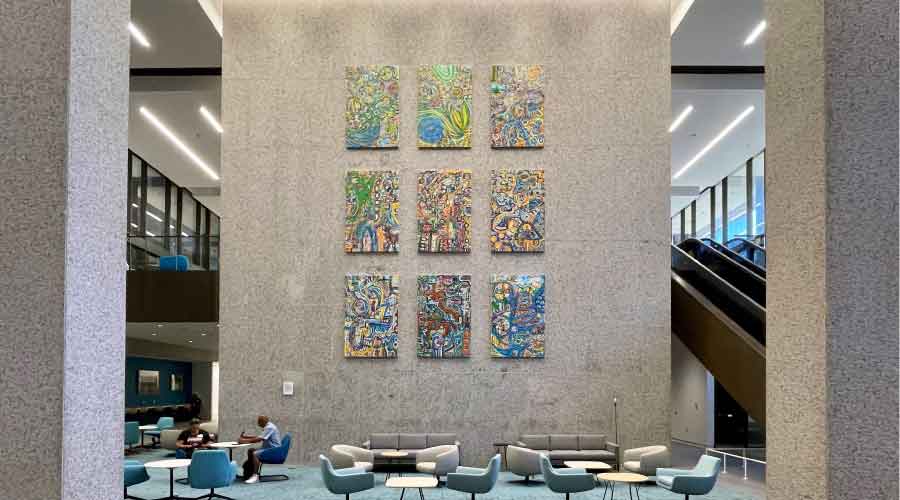 Changing the work culture of hundreds of employees is rarely easy. Some longtime employees get used to doing things a certain way and struggle when adapting to new situations. Others embrace change and make the experience positive. From Mercer’s point of view, the city’s employees seemed to take the latter approach.

“One of the most rewarding things for me was a lot of the employees hadn’t had the opportunity to be in a new facility, with new furniture and all the latest technology they could employ,” she says. “It was very rewarding to get to see the employees get a much better experience than they typically have being in a third- or fourth- or even fifth-generation space, for them to get new things and be on the forefront of workplace design and all of the aspects of the tower that allowed them to have a better work-life balance.” 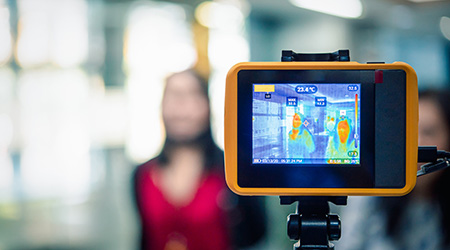