Being left high and dry is not always a good thing — unless you are referring to a roof on top of a 22-story condominium building on the beach. That’s what the Renaissance Tower condominium complex was looking for when it came time to replace a deteriorating roof that was no longer in compliance with codes. A fully adhered single-ply membrane was specified to replace the roof, but the bids to install such a system all came in over budget. “We decided to reinvestigate our options, and one option we looked at was the RhinoBond system, which we’ve used before with good results,” says Roger Parker, vice president at REI Engineers of Charleston, S.C., the consultants on the project. “We found that the combination of material and labor savings that the RhinoBond system offered made it affordable.” In the end, the Flex Membrane MFR PVC 60 mil membrane RhinoBond attachment system was chosen as the new roofing system. The RhinoBond attachment system from OMG Roofing Products of Agawam, Mass., is designed for use with thermoplastic PVC and TPO roofing systems. It uses advanced induction welding technology to bond the membrane directly to specially coated plates that are used to secure the insulation to the deck, all without penetrating the roofing membrane. The result is a roofing system with improved wind performance that requires 25-50 percent fewer fasteners and plates and up to 30 percent fewer membrane seams to weld on the roof. In addition, since the fastening points are spread out across the roof deck in a grid-pattern rather than concentrated in the seams of the membrane, the wind uplift load is distributed more evenly. The result is less point loading on each fastener, enabling the system to achieve higher wind ratings with fewer fasteners. “The wind uplift resistance of RhinoBond was important because the wind uplift requirement for this area is 130 miles per hour,” Parker says. “There were very few systems that could be specified for a building that tall and right on the beach.” Removing a single-ply system with pavers on it, repairing areas of the metal deck that deteriorated, and then installing the new roof while more than 200 feet in the air was not an easy task. “One of the biggest challenges was making sure everyone was safe, especially since the parapet wall was only 15 inches tall,” says Robby Helms, project manager for Tecta America Carolinas. “We used a raptor to rail safety system with the rail secured to the parapet wall, and also had the crew use safety harnesses when appropriate.” A 155-ton crane was set up on the ground to transport the new materials to the roof, and the old materials and debris off the roof. “Moving this material was very challenging on windy days,” Helms says. “We had to move the new materials up first thing every day, because afternoon winds would frequently force us to shut the crane down later in the day.” Despite these challenges, the installation was completed in 17 working days and a few days ahead of schedule, thanks in large part to the RhinoBond system. The new roof assembly consisted of one layer of 5/8-inch gypsum board on top of a metal deck, followed by two layers of polyisocyanurate insulation, another layer of gypsum board, and then the Flex Membrane. “The RhinoBond system goes down very methodically and saves a lot of time,” says Charles Arnold, project engineer at REI Engineers. “This was important because once the roofing crew did the tear off and repair work for the day there wasn’t a lot of daylight hours left to put down the new roof.” “The RhinoBond system kills two birds with one stone,” Helms says. “On a normal installation you would fasten the insulation with a 3-inch plate first, then lay the membrane and then add traditional fasteners in the seam. But with the RhinoBond system all screws and fasteners are installed in one operation.” Helms also raved about the RhinoBond welder. The stand-up induction welder bonds the underside of the membrane to the specially coated plates in typically five seconds. A magnetic cooling clamp is then placed onto the welded plate to assure a strong bond. “It’s a really ingenious system and very easy to operate,” he says. “It also takes the guesswork out of the process … it is as simple as positioning the welder and pressing a button.” Saving money on fasteners was another plus. Helms says he only used about 6,000 six-inch heavy-duty fasteners, which he estimated to be 35-45 percent fewer fasteners than on a typical mechanically attached roof. Julie Watson, community manager for the Renaissance Tower, is very pleased with how everything turned out. “The installation was great!” she says. “It was completed in a timely manner, the workers were professional and courteous, and we barely knew they were there most of the time.” She added that while the roof is only a few months old, “so far it seems to be performing to spec.” “I love RhinoBond and would absolutely use it again,” Helms says. “It worked really well and we plan to install more RhinoBond systems in the future. We see a real benefit to working with RhinoBond because it is easy to install, saves time, and saves on material costs.” 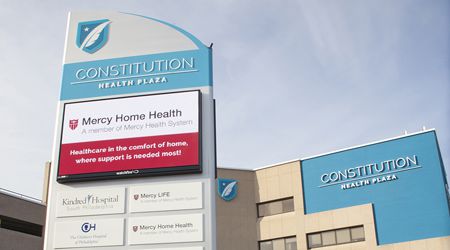 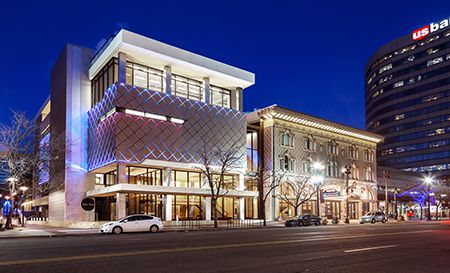 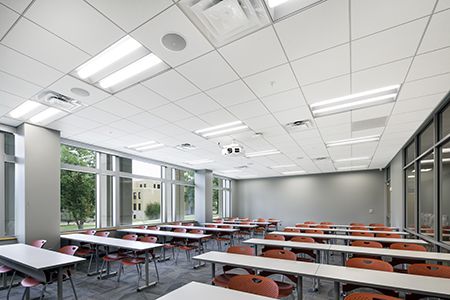 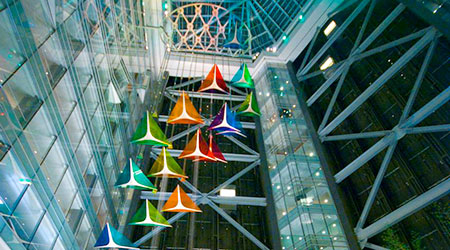 When the Compuware Building opened, more than 24 fixtures with special long-throw lens options were used to provide accent and event light from the ceiling. Though impressive, the fixtures, powered 24/7 with just the lamps turning on and off, presented long-term operational and maintenance challenges.