On Top of Energy Management

For 12 years, San Diego's schools have led national efforts to curtail energy costs and create eco-friendly facilities. Here's what managers have learned along the way.
By Renee L. Shroades   Roofing

Faced with tightening budgets and skyrocketing utility costs, school districts across the nation are rethinking their strategies for curbing energy use in facilities. Since 1994, the San Diego City School (SDCS) district has been fine-tuning a highly successful energy-efficiency strategy that includes promoting conservation, installing a district-wide energy management system, and experimenting with alternative energy technology, including photovoltaic roofs.

The plan has worked. In 1994, the district spent about $14 million on utilities, says William Dos Santos, the district’s director of maintenance and operations.

“And that’s what we’re spending now, 12 years later,” he says. “Had we done nothing, we anticipate that our utilities bill would be about $28 million a year.” This achievement is even more remarkable considering that since 1994, the district has opened three new schools and added 500,000 square feet to its existing facilities.

The district’s accomplishments haven’t gone unnoticed, earning local, state and national awards, including the coveted gold standard in energy conservation — the U.S. Environmental Protection Agency (EPA) Energy Star® label. Of the district’s 180 schools, 152 have earned the label. The district has more facilities with the Energy Star label than any other school district. According to Energy Star, buildings that have earned the label use up to 40 percent less energy than other buildings, while still providing the required comfort.

Along their path to greater energy efficiency, managers with the district’s maintenance and operations department have learned valuable lessons about making energy management work.

Installed and maintained properly, an energy monitoring and control system (EMCS) can be an organization’s most critical tool for maximizing energy-savings opportunities. SDCS decided to incorporate an EMCS into its energy program in 1994, and it established specific goals for the system and department.

The district aimed to capture 80 percent of its electrical and gas consumption data, says J. William Naish, the district’s energy program coordinator. “We managed to do that,” he says. Among the early steps in the process was selecting the best facilities in which to implement the EMCS.

“We wanted to capture the data from all of our high schools, middle schools and large elementary schools,” he says. “Those schools have more bang for the buck when installing an EMCS system.” By contrast, several small schools were using about as much energy as a typical house.

“For us to put in $100,000 to $200,000 worth of controls to manage a building that averages $500 in energy costs just doesn’t make much sense,” he says. Naish and his department have learned several other important EMCS-related lessons.

“For an EMCS to be functional, you need to have staff dedicated to addressing the EMCS and monitoring energy consumption,” he says. Some organizations might not have enough staff dedicated to the EMCS because managers instead would rather have technicians working at job sites.

“Sometimes, managers don’t like to see people hanging around the office working on computers,” Dos Santos says. “They would rather have them at job sites, working on the equipment hands-on.”

Keeping multiple systems from various vendors also can create problems because the larger the number of energy management systems an organization uses, the greater the potential for interoperability problems, he says.

“We did the competitive bid process, but we stated up front that whoever won the bid would be the sole energy management provider for the district for the foreseeable future,” Naish says. “The money you might have saved going with the cheapest might cost you much more moving forward to work out all those bugs.” Having only one system also enabled the department to streamline employee training.

“Our technicians all know it inside, outside, backwards and forwards,” Naish says. “You just couldn’t have that if a mechanic was to go out to one of our high schools and it had four different systems at that site. We also have the ability to only stock one set of parts for the mechanics.”

Being a leader in energy efficiency also means organizations most likely have taken the plunge into non-traditional methods and tools, including alternative energy technology such as photovoltaics. The semiconductor devices convert sunlight into direct current electricity, and users electrically configure groups of cells into modules and arrays. With the appropriate power-conversion equipment, the technology can produce and operate in parallel with and interconnected to the utility grid.

Through a vendor specializing in photovoltaics, SDCS began installing 1 million square feet of photovoltaic roofing on schools and facilities in 2004. Naish estimates the systems will generate more than $6.9 million in roofing replacement and electricity savings over 20 years. So far, the district has 14 sites with photovoltaic roofs, which can generate 1.8 megawatts.

“We currently have an additional five sites underway that are nearing completion, and they will add another 1.1 megawatts,” Dos Santos says. Also, plans are on the drawing board to add 14 more sites with a total potential of 3 more megawatts of power.

“They’re working great,” Naish says. “And from what we can tell, other school districts and commercial entities are now following our model.” The project began when managers started investigating alternatives to the electrical grid, which too often proved unreliable.

“We wanted our school sites to be more independent of the grid and to generate their own electricity through whatever manner,” Naish says. “We weren’t necessarily looking for a solar project, but any kind of distributed generation project that would allow us to acquire a more reliable and affordable source of electricity.”

The district remains interested in any distributed-generation proposals that might offer greater energy savings and independence from the grid, particularly any technology and applications involving photovoltaic systems.

“This might include installing the panels on open ground next to the roof, on open fields, parking structures or on top of our buses,” Naish says. “I’m open to anything.”

An essential element in achieving energy-saving goals is careful analysis of a project’s payback, Naish says. When the energy effort began in 1994, SDCS’s board wanted projects to average a 10-year payback. Too often, however, organizations focus only on the payback analysis and identifying a specify payback goal, Naish says. As a result, decision makers tend to look at each job individually.

“They would say, ‘You can do the lighting project that has a 11⁄2-year payback, but you can’t do the mechanical project because that has a 10-year payback,’ ” Naish says, adding that a broader view often reveals a different result. “When you blend them together, you actually have a five-year payback.”

The order in which projects are done also can determine success. When the district’s energy-management effort began, managers wanted to have a positive cash flow as soon as possible. So the department undertook all the quick-payback projects first. For example, it completed a district-wide, six-year lighting retrofit project that included replacing about 7,500 exit signs, 400,000 lamps, and 200,000 ballasts.

“We took out the old T12 magnetic ballasts and replaced them with T8 electronic ballasts,” Naish says. “One of the initiatives that caused us to be so successful was that it caused us to have a payback almost immediately, which helped us move forward. By far that was the best payback. It reduced our utility bill 40-45 percent.”

Focusing on major building systems that require large amounts of energy, such as lighting and HVAC systems, is often the first and most obvious step in curtailing energy use. But managers also can find large energy-saving opportunities by looking at less obvious areas of facilities and operations. Consider refrigerators.

“People don’t realize how many refrigerators school districts have,” Naish says, adding that his district has more than a 1,000 refrigerators. Over the years, the district often acquired refrigerators through private donations. But most of the refrigerators were old, inefficient units that people donated because they needed to dispose of them properly.

“We had hundreds of refrigerators that were not frost-free,” Naish says. “They were loaded with frost.” Besides being saddled with paying the high energy costs related to the units, the department also was forced to spend a significant amount of time repairing and maintaining them.

“We estimate that we are going to save about a quarter-million dollars a year just by replacing our refrigerators with newer, high-efficiency ones,” Naish says. “With the rebate we’ve received from the local utilities company for the old units that we are getting rid of, the payback is about a year for replacing them.”

Also, by requiring the same model for all new refrigerators, the department will be able to reduce its parts inventory and employee-training needs, generating further savings.

“A technician only needs to know how to fix one type of unit and can take care of any of the refrigerators in the district,” Naish says. “People just don’t realize how much money people spend on things like refrigerators. If we’re saving a quarter million dollars on refrigerators, just imagine how much we were spending.”

The department will continue its search for energy-saving opportunities, and success is more likely than ever because the district has created the critical element in such efforts — buy-in.

Says Naish, “Everyone from my level and up has all been behind energy conservation and environment issues, and that has made my job real easy.”

Roof Coatings: How to Properly Prepare a Substrate for Application 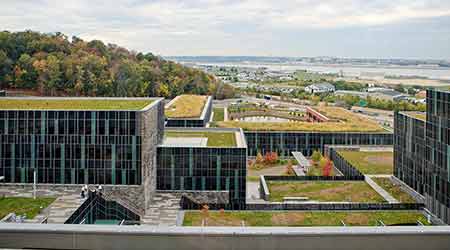