Rebates and tax deductions can help defray the costs of a new cool roof.

When the capital improvement budget is lean, it’s easy for facilities executives to find themselves with more potential projects than are financially feasible. A new roof, however necessary it may seem to be, is often passed over because it’s such an easy target for this familiar argument: “Let’s patch it up one more time and see if we can’t get another year out of it.”

However, if the roof really is in dire straits, facilities executives have learned that the energy saving benefits of a cool roof — one that is reflective and emissive — can provide the little extra nudge to move a roof up the project priority list.

What may be the clincher, though, or even a way to help upper management “discover” extra capital to fund a project that had previously been deemed deferrable, is that there are several options, from rebates to tax deductions, for energy efficient building envelope strategies like cool roofing that save energy and shave peak demand.

But how can facilities executives find and apply for these financial incentives? What are the requirements?

Essentially, there are three types of cool roofing-related incentives:

Beyond incentives, some cities like Chicago and states like Florida and Georgia even have mandatory cool roofing standards for low-slope commercial facilities. The most stringent state energy code — California’s Title 24 — also prescribes cool roofs, but deals with them a bit differently than an all-or-nothing mandate. (See sidebar.)

Facilities executives should understand these different types of cool roofing-related incentives and mandatory codes to make the best argument possible when a roofing project looms.

An understanding of basic physics is all that’s needed to recognize why cool roofs can help save energy. A cool roof reflects the sun’s rays, thereby preventing them from being transferred into a facility. Additionally, a roof that is highly emissive — one that re-radiates a high percentage of heat that is absorbed back into the sky — further reduces the amount of heat transferred into the facility. What this means is that during hot summer months, or any time of year when a facility is mechanically cooled, the cooling system has to expend less energy to keep the interior at a comfortable temperature.

“Few utilities have programs specifically for cool roofs,” says Mark Jewell, president of RealWinWin. “However, many will consider providing an incentive for a cool roof in the context of an existing custom program.”

Because cool roofs save energy, especially at the peak demand periods of the day, rebates as part of existing energy efficiency programs may be available. The first thing to do is contact the local utility, find out if rebates exist, and, if so, talk to the program manager about how a cool roof may fit into the framework.

“Rebates are mostly administered by utilities,” says Peter Turnbull, senior program manager at Pacific Gas and Electric and vice chair of the Cool Roof Rating Council (CRRC). “Go to them and ask how to apply.”

If a rebate is possible, the utility will conduct a pre-installation inspection and then calculate the possible savings based on square footage of the roof and nature of the facility. Areas of roof that cover unconditioned space — a garage, for instance — would not be included in the rebate calculation. Also, utilities usually won’t give a rebate for the installation of a better cool roof over an existing cool roof. For instance, applying a white coating over an unpainted aluminum roof probably wouldn’t yield a rebate.

“Custom energy-efficiency programs calculate rebates based on reductions in energy usage, energy demand or both,” says Jewell. “Some programs require that the rebate be calculated two different ways and then pay the lower amount.”

For new construction, in addition to peak demand shaving, another argument facilities executives may use with the utility is that a cool roof can help reduce the size of the HVAC system. If this can be demonstrated with energy modeling, an even larger rebate might be available. In terms of pure energy savings, this may be where the greatest opportunity lies.

“A cool roof is very important, but not nearly as important as rightsizing HVAC equipment,” says David Roodvoets, technical director of the Single-Ply Roofing Industry and a member of the CRRC board of directors. “A cool roof can help downsize HVAC equipment. Oversizing costs a lot.”

In addition to rebates that fall under the umbrella of custom energy efficiency rebate programs, there are a few utilities that provide rebates specifically for cool roofs that meet particular specifications. Austin Energy, for example, says a roof must achieve a reflectance of .75 to be eligible for a rebate.

Jewell offers a few pieces of advice for facilities executives planning to apply for cool roofing rebates offered by utilities: “Apply early,” he says. “They need to be able to earmark funds for the rebate and schedule the required inspections, so be sure to give them enough time.” Also, Jewell suggests finding a contractor who has dealt with the rebate program before. “That will help ensure that you get the proper documentation.”

The federal government also offers some help for installation of cool roofs, but in this case, the incentive actually takes the form of a tax deduction, and facilities executives would have to implement other building envelope strategies, along with a cool roof, to meet requirements.

The Energy Policy Act of 2005 acknowledges that cool roofing is a necessary component of a facility’s energy savings plan. The details, however, are complicated. For facilities that are able to exhibit a 50 percent energy improvement over ASHRAE 90.1-2001, EPAct offers a $1.80 tax deduction per square foot. But that deduction can be broken down: part for HVAC, part for lighting and part for building envelope. If facilities executives can demonstrate a 16.67 percent improvement over ASHRAE 90.1-2001 for any of those three areas, the building technologies involved would be eligible for a $0.60 tax deduction per square foot. Cool roofing falls into the building envelope portion, so a new cool roof would be eligible for that deduction.

For several reasons, there have been very few cases where facilities executives have taken advantage of this deduction so far. It is highly unlikely a cool roof is going to be able to single-handedly reduce a facility’s energy use by 16.67 percent compared with ASHRAE 90.1-2001, says Marc LaFrance, technical development manager for the Department of Energy’s Office of Energy Efficiency and Renewable Energy. Several strategies — such as a cool roof, increased insulation and window tinting — would have to be completed at the same time to achieve the requisite energy savings.

Another hindrance is the complexity of applying for the deductions. It’s a multistep process that requires shoehorning facility metrics into DOE and IRS definitions — which is often more than facilities executives are willing to do. “It’s a complex system,” says LaFrance. “It takes people time to go through. The Department of Energy is aware of groups working with Congress and the IRS to simplify the process and improve deductions.”

Finally, under the current law, the deductions are set to expire on Dec. 31, 2007. While many experts believe this deadline will be extended and the amount of the deductions increased, there’s no guarantee that will happen and facilities executives may be hesitant to plan costly improvements if the tax deduction isn’t a sure thing, especially if the deduction is part of the financial justification for the project.

There are also several mandatory cool roof regulations, some of which seem to stir strong opinions. That’s because, as Steve Ryan, program manager for Energy Star roofing, says, “There are lots of entrenched interests. No one likes codes thrust upon them.”

In states like Georgia and Florida, where year-round warm temperatures mean cool roofs will have the most energy benefit, codes that mandate specific reflectance and emittance requirements are less controversial and are generally agreed upon. Facilities executives in these warm southern climates will reap the greatest energy-saving benefits from cool roofs.

However, some mandatory cool roof codes are much more controversial. Take the Chicago Energy Conservation Code, for example. Originally enacted in 2001 with high emittance and reflectance requirements for all new public buildings, the code was scaled back in 2003 to a .25 reflectance requirement. However, after Dec. 31, 2008, the Energy Star requirement of a .65 reflectance for low-sloped roofs (found on approximately 75 percent of commercial buildings) will take effect. Also, according to Ryan, Energy Star is seriously considering adding an emittance value to its standard, a change that may also affect the Chicago code.

The reason for the controversy in Chicago, one that is echoed in other northern cities, is disagreement over whether cool roofs have energy benefits in cold climates. At first glance, it might seem that a cool roof would have a negative impact in winter because a facility should absorb the sun’s energy, thereby reducing the heating load. For several reasons — from lower sun angle, to fewer sunny days on average, to snow on the roof acting as a reflective roof anyway — the so-called heating penalty almost never overwhelms the energy benefits generated by cool roofs during the summer air conditioning months.

“Cool roofs are more effective in some climates than others,” says Payam Bozorgchami, an engineer with the California Energy Commission. “But California has 16 different climate zones, and cool roofs have been shown to have energy benefits in almost all of them.” Research to prove the energy benefit of cool roofs even in northern climates is ongoing, but most experts say that air conditioned buildings will almost always gain an energy benefit by using a cool roof.

Alone on a Heat Island

Besides, as is partly the case for Chicago, there is another goal for cool roofing legislation beyond just energy savings. “Some cool roofing codes are written to reduce the urban heat island effect,” says Greg Crawford, secretary of CRRC’s board of directors and executive director of the Cool Metal Roofing Coalition. “Of course, these codes have energy considerations, but they include environmental considerations as well.”

That environmental benefit is how cool roofing fits into other voluntary programs that seek to reduce the impact of buildings on the environment. LEED is the most well-recognized voluntary green building rating system in the country and some locales offer financial incentives to facilities for achieving various levels of LEED certification. Portland, Ore., and Santa Monica, Calif., are two examples. Additionally, many cities and states are beginning to either strongly suggest or legally mandate that new buildings meet LEED requirements.

The latest version of LEED for New Construction offers a credit for using a cool roof because a reflective, emissive cool roof reduces that facility’s contribution to the urban heat island effect and thus helps to reduce smog.

Still, the primary reason facilities executives will look at a cool roof for a roofing project is the potential cooling energy savings. “Savings in northern climates can be up to 10 percent of cooling energy, plus money saved in demand reduction,” says Scott Wagner, senior energy analyst at RealWinWin. “In southern climates, the savings can be higher. Some studies suggest savings of 20 percent of cooling load, or even more.”

And that savings represents a good start to an overall more energy efficient facility. “Reflective roofing is one leg of a ten-legged stool for energy savings,” says Roodvoets. “It’s important for facilities executives to take advantage of any chance to upgrade to save energy.” 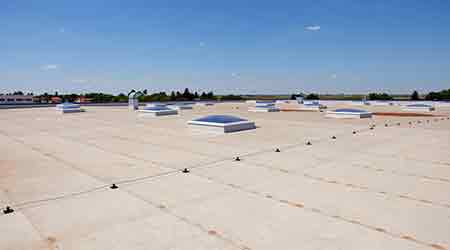