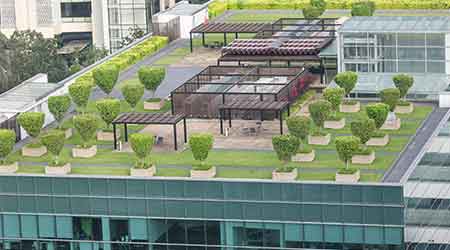 Green roofs are becoming more and more popular because of a variety of benefits. Here are some tips to get the most from a green roof.

Arguments about the benefits of green roofs are never ending. Researchers believe that green roof vegetation mitigates the heat island effect at both the urban and building scale. The heat island effect increases electricity demand for air-conditioning, causes poor urban air quality, etc. In 1995, David Sailor pointed out the correlation between air temperature and environmental issues, saying that, “A single degree Celsius reduction in summertime afternoon air temperatures corresponds to a 2 percent energy savings for the Los Angeles basin.” In addition, he explains, “Ozone concentrations in the Los Angeles basin are positively correlated with air temperature, increasing at a rate of 5 percent per degree Celsius.” Also, “For isoprene and the monoterpenes there is a 10 percent increase in emissions for each degree Celsius increase in air temperatures.” The green roof is an effective solution for these environmental issues.

However, some researchers argue that green roofs are not better than other cool roofs, such as white roofs, when it comes to the heat island effect. A Berkeley Lab Report, “Economic Comparison of White, Green, and Black Flat Roofs in the United State,” explains: “Both white and green roofs do a good job at cooling the building and cooling the air in the city, but white roofs are three times more effective at countering climate change than green roofs.” On the other hand, green roof plants must survive harsh conditions. Suitable plants, like sedum, do not absorb water as efficiently as other plant species. Scott MacIver, a biologist at York University, who co-wrote the city’s new guidelines for biodiverse green roofs, stated that sedum absorbs heat instead of reflecting it. “The problem is that sedum plants aren’t really performing on green roofs,” he notes. “They’re just there.”

If we only consider a high albedo roof surface to reflect solar radiation and reduce the ambient temperature, yes, nothing is better than a white roof. But do we really want cities of all white roofs? White roofs do not provide habitats for wildlife and aesthetically pleasing landscapes for human beings. White roofs cannot reduce stormwater runoff or improve air quality. But green roofs can achieve all of this with the soil and plants’ water absorption, evapotranspiration, and photosynthesis.

Green roofs have a strong positive impact on the environment while also providing birds and insects habitat and pleasing aesthetics. Then, how can we make a green roof everyone loves? Here are five strategies to make the green roof beneficial year-round.

Mecanoo Architecten designed the Delft University of Technology library with one of the largest green roofs in the Netherlands. The designer claimed it as “a building that does not really want to be a building, but a landscape.” The library has a sloped plane extending the grass from the ground to the very edge of the roof, allowing people to walk to the top. It is not only a roof, but also a space for students to take a break, have lunch, read a book, have fun with friends, and enjoy beautiful and healthy sunlight.

For mid-rise or high-rise buildings, planning an entryway and walking paths can make the green roof fully usable by residents. A perfect example is the 20,300 square foot rooftop garden on Chicago City Hall. This roof garden contains more than 20,000 plants of more than 150 varieties. Its symmetrically designed walking path matches the geometry of the roof plan, which makes the roof not only a garden full of excitement for its visitors but also a pleasing view for the people who work in the high-rise buildings around it.

For projects that cannot allow people to hang out on the green roofs, locating the green roof at spots visible to users is an option. The University of Wisconsin — Milwaukee started installing green roofs in the early 1990s. Its two largest green roofs were installed on the buildings that have the most “audience” on campus. One is a 33,000-square-foot green roof on the two-story Sandburg Commons, surrounded by four residential high-rise towers with a housing capacity of 2,700 students. The students who live in the dormitory facing the commons can easily see the green roof. The green roof includes geometric patterns which add some dynamics to the green roof view.

Another example is a 50,000-square-foot green roof located the lower roofs on Golda Meir Library that can be easily seen by the students, faculty members, staff, or visitors using the conference rooms and reading rooms on the top floor of the library.

3. Landscaping design for all seasons

Selecting plants is a challenge for most green roof landscaping designers, especially, to make a green roof year-round beautiful. For regions that have snow in winter, a year-round pleasing green roof landscaping sounds like an impossible mission. The Delft University of Technology library converts the green roof covered by snow into a sledding hill, so people can utilize the green roof throughout the year. For regions of warm winter, choosing diverse and native plants can keep the green roof flourishing in all seasons. The California Academy of Sciences is a good example of green roof landscaping. Unlike Delft University of Technology’s selection of grass for the green roof, the California Academy of Sciences chose native plants including five colorful annuals and four perennial species that attract wildlife like birds and bees. Designed by Renzo Piano, this 2.5-acre green roof consists of two 90-foot domes above the roofline and rolling hills, which trace back the contours of the planetarium and artificial rainforest. The green roof is penetrated with skylights around the building’s central piazza. The year-round thriving plants enhances this innovative green roof design and meets Piano’s expectation of “very monolithic, very neat and clean and green” during the whole year.

Green education is an easy and inexpensive strategy of nudging people to fully use or notice the green roofs. A post, sign, screen display, or newsletter can increase awareness of the green roof’s existence, which can also bring people’s attention to the heat island effect and other environmental issues. Even a brief introduction about the green roof’s location, features, and benefits can boost people’s interest to go upstairs and explore the roof. The Calhoun School located on the Upper West Side of Manhattan launched the Green Roof Learning Center as they built a green roof on their expanded building in 2005. The school ties the green roof to their classes including chemistry, physics and biology, which greatly enhances the student’s studies in all the scientific disciplines, said by Steve Nelson, Head of the Calhoun School. In addition, this is a great opportunity to cultivate environmental awareness in schools. The green roof not only makes studies more interesting, but also educates students with things they cannot learn from books.

Quality maintenance keeps green roofs performing well throughout the year, and also makes building owners’ initial investment worthwhile. Green roofs often get less care than ground landscapes. It is true that green roofs usually consist of plants that require the least amount of maintenance and that can survive in harsh conditions. However, these are not excuses to neglect the green roofs and leave them behind in terms of maintenance. Necessary weed control, watering, and fertilization should be provided depending on plant types. Annually or quarterly checking the drainage and waterproofing system is required too. For colder regions, the irrigating sprinklers must be drained before the ambient temperature drops below freezing. Otherwise, the pipes and sprinkler system will be damaged during the first freeze of winter. People always remember to winterize the sprinklers for ground landscapes, but easily forget that for green roofs, because the roofs require such minimal maintenance.

How to Add Value on Your Next Roofing Project