The InterContinental Hotel is the largest in California to achieve Gold Status under the Leadership in Energy and Environmental Design (LEED) Existing Buildings: Operation and Maintenance ratings system from the U.S. Green Buildings Council.

One of the areas Hobbs and the engineering staff targeted for improvements to earn LEED points was water conservation.

"We went through 110 categories in the LEED rating model and identified areas where we thought we could make significant progress," Hobbs says. "In the water category, this was an area that seemed to give us the greatest benefit with the least risk."

One of the hotel's primary water-conservation projects was replacing sink aerators throughout the hotel. In 2010, the maintenance staff replaced sink aerators in all 550 guestrooms of the 32-story hotel and in the kitchen hand-washing stations. The city utility provided the 0.5-gallons-per-minute (gpm) aerators to the hotel at no cost to install in place of the 2.2-gpm aerators that had complied with the Energy Policy Act of 1992.

The aerator retrofit process required a minimal amount of time of the in-house maintenance staff, which completed the project in about a week and produced significant savings for the hotel. Since each aerator required only about five minutes to install, "guests probably didn't even know we were there," Hobbs says.

The hotel's water-saving measures help save an estimated 3 million gallons of water a year on guest room operations, assuming full occupancy. The new aerators account for two-thirds of that amount.

"It was a fairly simple solution to go in and change them," Hobbs says. "It's been a good decision. We have some folks who think the (water) pressure is too little, but maybe one in 100,000 guests will bring that to our attention. It's a very low percentage. Most people understand, especially with the drought conditions (in the state) that there have to be some tradeoffs."

Partnering with San Francisco's Department of the Environment helped the hotel realize the importance of conducting regular toilet leak checks as part of its preventive maintenance (PM) program. The inspections take place four times a year, and the increased attention and maintenance has helped the hotel cut its water use from the toilets by 20 percent.

The Department of the Environment "believes that 20 percent of the toilets leak in hotels, regardless of the age of the product," Hobbs says. "During the fill cycle after the flush, (leaking toilets) allow more water to flow through than was intended. We religiously (inspect for leaks) as part of every room PM program." 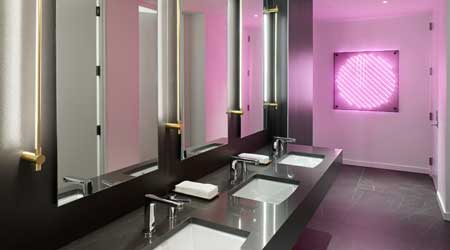