The bathrooms were renovated as part of an ongoing project that also covers the theater, lobby and public spaces. In an unusual move, the bathrooms went first, to serve as an example for how the larger renovation would look.

To address the functionality issues, large circular storage spaces were combined with the existing restroom footprint, increasing the size of the women's room from 326 to 713 square feet and the men's from 290 to 372 square feet.

The city specified items such as faucets and flush valves due to historic preference, but the aesthetic finishes were a blank slate, especially since the other spaces they'd match hadn't been yet fully designed. Terrazzo was used on the floors for its durability and customizable colors. Partitions are stainless steel and reach closer to the floor to provide more privacy. The walls are clad in glass tile to provide a reflective surface to play up the restroom's central design feature: a color shifting LED panel system. The lights cycle very slowly through the prism so that the color shift is almost imperceptible. The lobby has a much larger version of the light panels.

Maintaining the experience of a night out at the theater was important. "For us in the performing arts, it's really about an entire experience," says Baker. "We realized in hindsight that it's weird to be so careful to set a scene and set a whole vibe for an evening and there are always a few moments where everyone goes into another room and it's like you're in a basement. The whole smoke and mirrors fall down and you're back to reality."

But with a city building, Baker says, the design needed something that would stand the test of time as another renovation wouldn't be likely for another 30 years. "I don't think any of us could have imagined how well it came together," she says. "It feels very clean, very functional and modern, but in a timeless way."

The Scottsdale Center for the Performing Arts' restroom placed third in the Cintas contest. Architect John Douglas says he's received a fair amount of good-natured kidding for all the attention this project has garnered in light of larger projects he has done. But he doesn't shy away from the need for good design, no matter the space. "Restrooms are part of your daily experience and they need to be done as well as anything else," he says.

Restrooms are often shorted because they are traditionally more expensive to design per square foot than general office space, Lingerfelt says. But using strategies like energy and water efficient fixtures and taking advantage of any available rebates for such fixtures can help with the cost, especially when considering the life of the project rather than just up front costs. "Obviously, it's utilitarian in nature and there are laws that come into play," Lingerfelt says. "But you can think of what the givens are and then raise that bar." 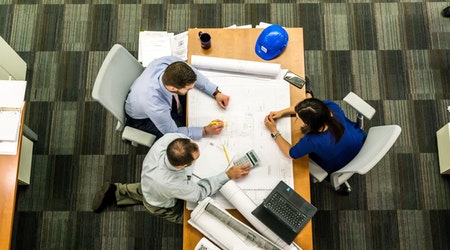 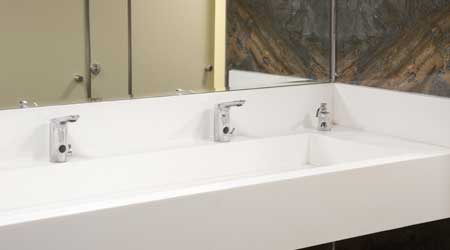