First of a two-part article exploring dorm restroom renovations at Ithaca College.
By Timothy Carey   Plumbing & Restrooms
OTHER PARTS OF THIS ARTICLEPt. 1: This PagePt. 2: ADA-Compliant, Gender-Inclusive Restrooms Are The Goals For Ithaca College Restroom Renovations

At Ithaca College, individual restrooms replaced community-style facilities, and the number of ADA-compliant restrooms (not shown) was increased.

Recently, there has been much written about contemporary trends and topics that affect the way that facility managers update, remediate, and otherwise make compliant restrooms on college campuses. Upgrades to residence hall restrooms have typically been executed to accomplish one of two primary goals: a) to deliver a needed refresh of the existing restroom via the provision of new fixtures, new flooring, and tile — perhaps even an LED upgrade — to accomplish a “replace in kind” approach; or b) to become compliant with important code and regulatory changes — such as ADA requirements. (See, for example, Joan Stein’s “Changing Spaces” article in the May 2016 edition of Building Operating Management.) A third option that includes a transformational upgrade to residence hall restrooms when converting an older building to suite-style or apartment-style living — although pursued in some instances — is both intrusive (rendering the residence hall uninhabitable for an extended period) and, obviously, quite costly.

Similar to many facilities organizations throughout the American higher education landscape, Ithaca College is paying attention not only to the realities of aging residence hall buildings and ADA-required ameliorations, but also of the emerging requests from students for a new paradigm in restroom accommodations: a private and gender-inclusive environment.

Ithaca College is a private residential institution in upstate New York. Founded in 1892 as a music conservatory in downtown Ithaca, the physical campus was relocated a mile from town onto South Hill and was constructed primarily in the 1960s and ‘70s. As a factor of that particular era’s construction vintage, the majority of the residence hall restrooms are of the “community-style” variety: a row of sinks, a row of bathroom stalls, and a row of showers that are conducive to visits by multiple students simultaneously. You may have used this type of restroom as an undergraduate. Candidly, they worked for many students. They fulfilled their intended design function — but with some limitations. Unfortunately, they did not meet the needs of all users, and they are no longer working for today’s students.

Formal and informal surveys of today’s residential students (at Ithaca and elsewhere) point to a desire to have more privacy within the restroom environment. This aspiration has now been both exacerbated and accelerated by a growing number of self-identifying students who desire to not be confined to choosing between a traditional men’s vs. women’s restroom. Indeed, private, “all gender” restroom options are not just the flavor of the day; rather, they are becoming a federally mandated requirement.

The intent at Ithaca College, therefore, was to merge the three predominant factors of ADA compliance, student’s desire for privacy within the restroom, and the forthcoming required all-gender capable restroom environment as part of a long-term renovation plan to address aging, community-style restrooms. Admittedly, the ideal solution would have been to conduct massive renovations of the older residence halls to accomplish the highly-desired apartment- or suite-style living arrangements that most new residence hall construction provides; however, Ithaca was looking for a solution that was more budget-friendly and could also check off the proverbial — and critically important — compliance and privacy boxes.

Furthermore, the oldest residence halls house, primarily, first-year students and Ithaca College values the community-building byproduct that accompanies traditional floor plans requiring such students to leave the confines of their rooms to use restroom facilities.

Ithaca College’s dorms were mostly built in the 1960s and 1970s and the majority of the residence hall restrooms are community style. 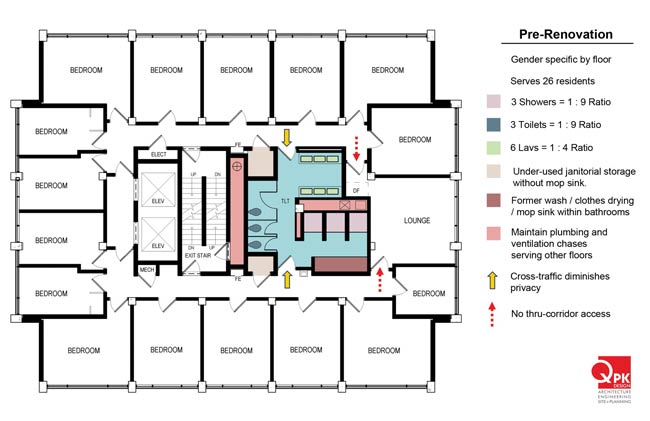 Ithaca College’s master plan increases ADA-compliant restrooms, and gender designations have been eliminated. All restrooms are individual and private. 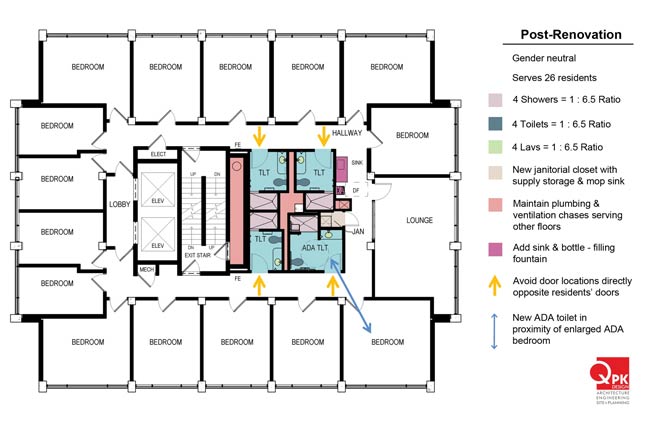