How to Focus on Inclusivity and Equity in Restroom Design

Restroom designs are evolving to become all-inclusive spaces that offer equitable access to diverse populations.
By Maura Keller   Plumbing & Restrooms
OTHER PARTS OF THIS ARTICLEPt. 1: This PagePt. 2: Privacy Considerations for Designing All-Inclusive Restrooms Pt. 3: How to Measure Results of Design Shifts to All-Inclusive Restrooms

In the shift to becoming all-inclusive, the first issue is privacy. Minimizing sight lines by closing gaps around doors and extending partitions as close to the floor and ceiling as possible increases privacy.

When you think of your facility’s restroom design what comes to mind? A functional environment that meets the personal needs of users? Certainly. But historically speaking, restrooms have long been battlegrounds in the struggle for civil rights.

As Ben Garbow, designer at Payette explains, racial segregation in public facilities, including restrooms, were a key instrument of oppression in the Jim Crow South stretching into the 1960s. And in the past decade, numerous states have enacted “bathroom bills” which prevent trans people from using the facility that fits with their gender identity.

“The target may be different, but the desired result is the same: to make a specific group of people unwelcome in public space,” Garbow says. “But for as long as restrooms have been instruments of exclusion, their conception as being intrinsically tied to gender is relatively short. In fact, public restrooms have only been separated by gender since the mid-1800s.”

With the movement for trans rights and evolving conceptions of gender reaching the mainstream, gender-coded spaces are being rethought in design-centric terms for the first time.

“Gender-inclusive facilities show a workplace or institution’s commitment to equity, diversity, and inclusion,” Garbow says. “They signal that a facility is ready to meet an evolving population where they are, a generation of young people coming of age with different conceptions of gender and identity than previous ones. And it allows a company to hire a more diverse workforce, a school to recruit a broader range of students and staff.”

“Commercial restrooms, especially in the U.S., have been woefully behind the curve in terms of heeding design principles that allow for a more pleasant, dignified experience,” Lee says. “From the controversy of allowing people to use the toilet room with the gender signifier that they identify with to the egregious lack of privacy with typical metal toilet partitions and the gaps between the partial height door and the often wobbly frame, bathrooms in commercial settings have only recently received attention with enough critical mass to make people take notice.”

Building owners and managers have to balance many pressures and decisions for every project. For tenant occupied buildings, one of the biggest expenses to the tenant spaces is restrooms. As a major budget item, the overall costs are usually the driver of any final design solutions.

With the increased awareness of social equity for all public spaces, building owners need to re-assess how these public bathrooms are conceived, says Jennifer Kenson, principal at Francis Cauffman Architects. The design standard of two large multi-stall ganged bathrooms no longer satisfies the diverse needs of the public.

“The ADA legislation made an impact when first introduced, providing appropriate space for people with disabilities, and social pressure is making the design community think more broadly about people that use restrooms,” Kenson says.

As Kenson points out, ADA increased awareness of the many types of disabilities that people live with as they negotiate the world. This awareness also brought recognition of the needs of children and adults with disabilities. Children continue to grow physically, but their disabilities do not necessarily diminish.

And with many existing facilities not providing ADA-compliant toilet rooms in their multi-ganged toilets locations, single room ADA bathrooms have been carved out of building core spaces to meet the local regulations.

“Although they often exist because of a lack of space, these individual rooms have become the unisex toilet rooms as well,” Kenson says. “People who do not feel comfortable in the multi-stall toilet rooms opt for these as an answer to privacy.”

Unfortunately, accommodations for cultural or religious needs are slow to be adopted. The needs are less frequently acknowledged in corporate real estate environments. Kenson believes this is mostly due to a lack of knowledge and understanding of what these designs might entail.

“Overall education on how different cultures could be accommodated is needed so that design teams can ask the questions of clients,” Kenson says. “Some of these considerations might include a water source, in addition to toilet paper for cleanliness — this would impact the need for more floor drains.” Another consideration might be including squat toilets, which are more prevalent in some cultures. There are plumbing fixtures that could be included within a private room to accommodate that preference, says Kenson.

And while ADA accessibility is not hampered by the accommodations that have been developed for gender equitable spaces, cultural and religious pressures are more challenging. As Lee explains, there are generational, vanity, and privacy frictions that come into play for certain people, and creed will factor into these hesitations regarding sharing a toilet facility for all genders.

“Separate and private ADA or family rooms are the closest thing that comes to mind when considering the ‘how’ in accommodating these sensibilities,” Lee says. “I do not think it’s a deal breaker, however, to have additional toilet facilities to meet the needs of people who simply don’t feel comfortable sharing the same space as a colleague of the opposite sex. There may never be a way to universally address everyone’s definition of safety, but that doesn’t negate the need to move the needle beyond tolerance into a healthier version of understanding and acceptance.”

How to Focus on Inclusivity and Equity in Restroom Design 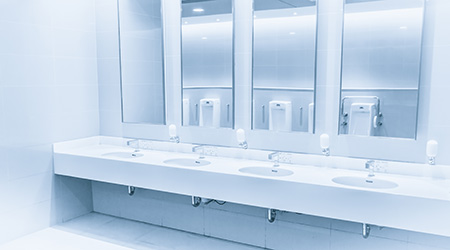