The process of earning a certification under the Leadership in Energy and Environmental Design for Existing Buildings (LEED-EB) rating system offer institutional and commercial facilities a host of dividends, from more sustainable operations to lower energy costs that are created by efficiency improvements to HVAC systems. In some cases, however, the process also results in benefits that go beyond traditional.

In the case of the County of Ventura, Calif., earning LEED-EB certification for one of its facilities enabled the county's facility maintenance department to test the waters when it came to performing plumbing-system upgrades using in-house technicians instead of outside contractors.

"It has really been very successful for us, so we've gone ahead and developed a program to go through the rest of our buildings," says Paul Young, principal engineer and head of the facility maintenance department for the county.

The project's success means the department will be able to put its experiences into practice in an expanded effort to conserve water and deliver bottom-line savings to the organization.

The facility that started it all for the County of Ventura is the Vanguard Building, a 78,000-square-foot, two-story office building built in 1987 and occupied in 1988. The facility has about 260 occupants each day and houses two county departments — adult probation and human services — that draw a total of about 400 people daily.

The building had endured wear and tear over the years, and the department had updated some of its interior components based on changes in occupant locations and activities.

"We'd gone through quite a few tenant improvements inside, but up until 2008, we hadn't touched the infrastructure at all," Young says. "So in 2008, it was a 1988 building." The building's condition forced county officials to explore its options after 20 years of operation.

"We were wondering what we were going to do with the building," Young says. "Were we going to keep it? We were, so we decided we had to go through the entire building and update everything. We had a leaking roof, and the HVAC system was failing, so why not look at LEED (certification) also?"

The process of pursuing LEED-EB certification included installing new HVAC controls and a new roof, as well as upgrading the exterior parking-lot lighting. It also allowed Young and his staff to identify a plumbing upgrade as a contributor to certification, as well as a possible template for future work in other county facilities.

"It was this great marriage between the upgrade and LEED," he says. "By upgrading the plumbing, we were eligible for two LEED points. It was also water conservation. We had water closets in there that were 3.5 gpf (gallons per flush) and urinals that were 1.5 gpf, so there were a lot of opportunities for water conservation."

The Vanguard Building earned LEED-EB Silver certification in May 2010. 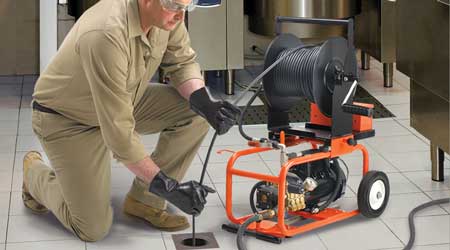 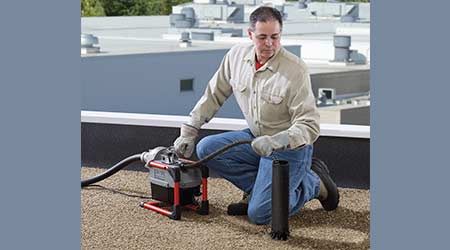 Drain Cleaning: Maintaining the Tools of the Trade