This year, 525 BlueCross employees relocated their call center into a discarded Wal-Mart store.

“I have been in facilities management for 18 years and it's very unusual”, Brown said of his complaint-free occupants. “I attribute the fact that we haven't had any complaints to the direct-indirect lighting.” In fact, Brown said, “They absolutely love it”.

Although Health Care Service Corporation has converted other large empty box stores into BlueCross offices, this is the first such project in the Tulsa area. The model that Tulsa followed repurposes abandoned large box stores into, what HCSC calls, Full Service Units. However, reflective glare on computer terminals is a problem common in such large open spaces, causing eye strain and fatigue. That means visual comfort and energy efficiency were the top priorities in creating the new lighting for the repurposed Wal-Mart.

The project’s lighting consultant and designer, Mitchell B. Kohn, explained that with that goal, the team selected a new technology called Miro reflective aluminum that incorporated into the Energie brand light fixtures.

Miro, by Alanod, is an extremely reflective aluminum optical surface that is also highly specular. Therefore, not only does Miro reflect nearly all the light created by the fixture, and thereby wasting very little energy, but because Miro is uniquely specular it allows lighting designers the ability to point light only where needed. In that way, the new fixtures increase both the quantity and the quality of light, while at the same time substantially reducing energy consumption.

Kohn said that in order to create a glare free space with the best light distribution characteristics “the Miro optical material was critical because of its very high reflective capabilities”. And for optimum performance, Kohn explained that Energie needed to “bend the material at exactly the right angles” so that the light output was appropriate and caused no glare.

Brown says his job is to find fault with a space so that he can make improvements or squeeze more efficiency out of a space. But he explains he’s having a “hard time doing that” with the new lighting because he’s found no problems.

“I can’t say enough good things about it,” says Brown. 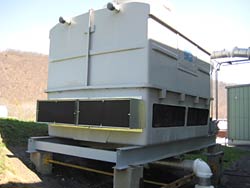 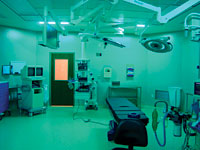