The Lowdown on LEDs

Each day, more traffic lights, truck, bus and automobile signals, and brake lights using light-emitting diodes (LEDs) appear on the market. Cell phone screens are backlit with LEDs. Sporting events feature scoreboards and advertising signs brightly lit with this light source. As a result, many people wonder, “When will this new light source be used in our building lighting systems?”

In the past decade, manufacturers have conducted a great deal of research and development in an effort to move this light source beyond its use as an indicator and into building lighting systems. Building emergency lighting systems have used LEDs in exit sign applications for many years. LED exit signs provide dependable marking of egress doors at low operating cost, and their long life makes them attractive for the high reliability requirements of life-safety applications.

These small solid-state electronic devices light up when energized by a small current, and their output is a function of the physical construction, material used and the exciting current. Unlike incandescent or halogen sources, LEDs have no filaments to burn out and generate very little heat.

A major advantage of LEDs is the reduced maintenance labor cost for replacing bulbs. LEDs theoretically can last up to 80 years with no maintenance, depending on two key issues: how they are driven and how they are protected against power line transients. Realistically, there should be no maintenance on LED exit signs for at least 10 years. Most manufacturers warrantee their LED exit signs for five years, one of the requirements to qualify for the EPA ENERGY STAR®.

Size is another major advantage for LED light sources in other building lighting systems. The total thickness of an LED array and circuit board is less than 1 inch, reducing the traditional fixture depths of fluorescent fixtures and reducing the space needed in the plenum or in an indirect or direct-indirect fixture profile. The next generation of designs will eliminate fixtures altogether. Instead, light will emanate from furniture or building elements.

Other building lighting systems are starting to benefit from the higher efficiency and longer lifetimes offered by high-brightness LEDs.

LEDs are “very promising technology, but there are a number of barriers that must be overcome before being widely adopted,” says Jeff McDonald, of McDonald Consultants in Cleveland who tracks industry trends.

“Although LED efficiency has been significantly improved in the past few years, the efficiency is just now approaching that of compact fluorescent lamps (CFLs),” McDonald says. The red LEDs used in exit lights and traffic and vehicle lights are the most efficient devices available. The best LED arrays measure 40 lumens per watt (LPW), while CFLs produce in the 40-87 LPW range.

LEDs also can be cost-prohibitive in many applications, a challenge manufactures must address before their products can become competitive cost-effective solutions.

Finally, color remains an issue. LED manufacturers are addressing both color temperature and color rendering issues by seeking the best technology for producing white-light-source LEDs that also are efficient. To be viable building light sources, LEDs need to offer a range of color temperature products available, from warm (3,200 K) to cool (4,100 K).

Organic LED (OLED) technology probably holds the greatest promise among the different ways to produce white light with solid-state devices. Earlier white-light LEDs were made from a combination of molecules with different energy gaps, so they emitted light at many wavelengths, simulating white light.

But materials used in these devices degrade at different rates, so the spectrum of resulting white-light LEDs changes over time. The change makes them inappropriate for use as a source in building lighting systems that require a stable spectrum.

Researchers recently demonstrated a technique known as down-conversion to generate light of many wavelengths. They aimed an organic LED that emits blue light at a glass substrate. On the other side of the glass, they deposited layers of dyed polymers containing particles of phosphor similar to those in fluorescent lamps.

The color temperature of the new device can be tuned between 3,000 K and 6,000 K by changing the thickness and number of polymer layers. Since the LED is based on light produced by just one type of molecule, researchers say it should be very stable, as well as easier and less expensive to manufacture.

Lighting specifiers also will benefit from standards and common testing methods to measure LED operating characteristics. A government-funded project called the Next Generation Lighting Initiative (NGLI) is addressing this other barriers.

NGLI has set up a consortium of manufacturers, national laboratories and other interested parties to initiate and manage basic and manufacturing-related research contracts on white-light-emitting diodes for the lighting Initiative. The two areas of immediate focus are to: (LRC) at the Rensselaer Polytechnic Institute, researchers are working with polymer chemists to develop non-yellowing polymers that can encapsulate these new semiconductors.

Lighting industry sources agree that this is at least five years away. Until then, LEDs will start to displace other technologies largely in niche lighting applications.

For example, LEDs are challenging neon in signage applications, especially in backlighting letters of large outdoor signs and accents. The advantages of long life and lower energy and maintenance costs make this LED application quite promising in the short term.

LED manufacturers also are developing new wayfinding products, such as aisle markers and step lights in distributed-lighting applications. Such products some day might replace unit equipment that illuminates egress aisles with incandescent or halogen lamps.

LED manufacturers are aiming for wider market adoption of their products by the end of the decade. When LEDs finally make it big into general illumination, the ability to more easily and inexpensively control their intensity — and perhaps color — will be a major advantage over other existing light sources. 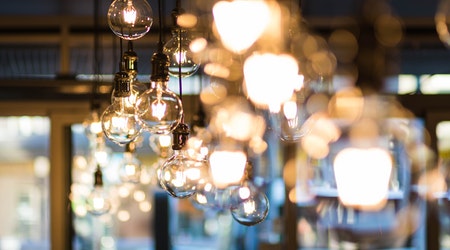