If the goal is to cut energy use, one of the best places to look for opportunities is lighting. The Department of Energy estimates that 25 to 35 percent of the power used in most buildings goes to lighting. And while much of the interior lighting has been upgraded over the last 20 years, that work is now reaching the end of its useful life — just in time for improvements that have been proving themselves over the last few years. Even a facility with '90s-era T8 technology could cut its lighting kilowatt hours by 30 to 50 percent with new offerings. Facilities with T12 technology could save an even bigger bundle.

The proliferation of new options offers both opportunities and challenges to facility managers. While light emitting diode (LED) lamps and fixtures are all the rage, other technologies, both common and new, continue to improve. New and better light sources and controls are cutting watts while maintaining or improving the visual space. Applying these advances in interior work areas, parking structures and lots, and warehouse and big box spaces is yielding significant savings.

As LED efficacy (i.e., lumens per watt) has risen, equipment costs have been falling. But alternatives to LEDs have not been standing still. Longer life and higher intensity fluorescents, 100,000-hour induction, and light-emitting plasma (LEP) units are fighting to either maintain or expand market share.

LED lighting is now becoming standard in several applications. For one, it is replacing incandescent and halogen lamps and fixtures, where energy and labor savings may be enormous — often greater than 80 percent — especially in downlights, retail store illumination, museums and galleries. LEDs are available in most major screw or plug-in lamp configurations to provide one-to-one replacements. Some dim on existing dimmers and offer a range of beam spreads. Color and rendering may closely match that of incandescents, but a "test before you invest" strategy is recommended.

Secondly, indoor area LED fixtures for new construction and major interior renovations are displacing standard fluorescent units. While direct LED replacements for fluorescent tubes have yet to pass muster, new fixtures (e.g., troffers) designed from the ground up to use LEDs are providing equivalent or better light distribution and color, better controllability, and reduced relamping cost. 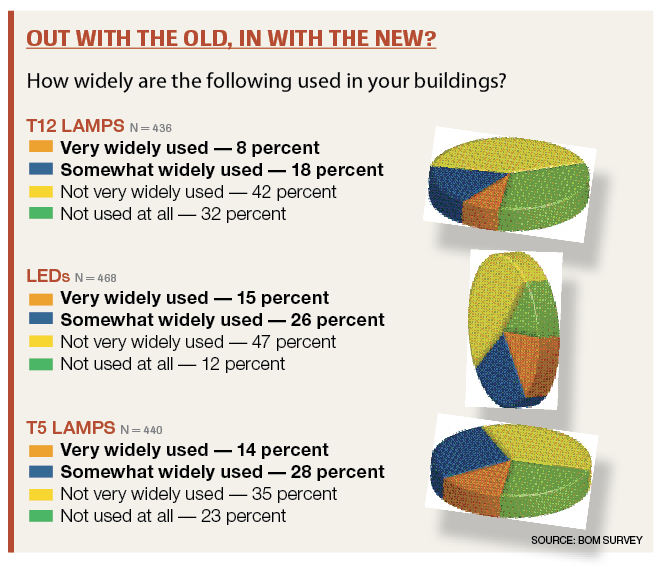 Fluorescents, Induction Lighting and LEPs Continue to Expand and Improve