By Dan Hounsell, Editor-in-Chief
Lighting
OTHER PARTS OF THIS ARTICLEPt. 1: This PagePt. 2: LEDs: Benefits of an Upgrade

How do you eat an elephant, asks the old joke. One bite at a time. The Herbert C. Hoover Building in Washington, D.C., certainly is no elephant. But the strategy for introducing LED lighting to the 86-year-old office building did involve a focused approach that targeted hundreds of aging fixtures, specifically in areas requiring 24-hour lighting for safety or security.

“We did a cost-benefit analysis targeting the areas where lighting is always on for either egress or security purposes because we would achieve the best cost savings on an electrical bill by hitting those lights that are already on,” says James Fay, senior general engineer and deputy building manager.

Perhaps more importantly, the relatively small scope of the LED upgrades helped ensure the project’s success, and it paved the way for incorporating LED lighting into ongoing, larger-scale renovations of the historic building.

Everything old is new

The Herbert C. Hoover Building, headquarters of the U.S. Department of Commerce, hosts 3,300 occupants and was the largest office building in the world when it opened. After decades of heavy use, the building has been undergoing a host of renovations in the last decade.

“We are in the 10th year of an eight-phase renovation, and we are wrapping up phase four, which was a refurbishment, not a complete renovation or systems replacement,” says Eugene Altermatt, building manager in the department’s office of space and building management, adding that the U.S. General Services Administration “came in and took the building back to its bones. They tore out the electrical and the original piping and almost all of the hazmat material.

“They replaced all that with new electrical and water systems. The heating has gone from steam radiating — we used to have more than 3,900 radiators, and now under each window we’ve got a fan coil unit for heating and cooling.”

Altermatt, Fay and their team undertook the lighting upgrades separately from the broader renovations. Their upgrades to introduce LED lighting, which began in February of this year and were completed five months later, targeted areas where lights need to remain on around the clock for safety and security reasons, as well as the exterior of the building.

“This was the best bang for the buck,” Fay says. “We replaced lights covering approximately a quarter million square feet of the building, including our perimeter lighting.”

The department handled some of the work, while contractors handled other parts.

“For the large bulk replacement, we did a contract,” Fay says. “For the areas where the work would involve interfacing with people and getting into offices and working with the security office, we did those in-house.

“Those are part of the registered historic facade of the building, so we had to make sure the work was done up to the proper standards, which was easier to do working with our in-house people.”

Lighting upgrades at the Herbert C. Hoover Building presented challenges common to similar upgrades in many types of facilities, but finding the right mix of products and technology to meet energy-efficiency, aesthetic and security proved especially challenging.

“Most of the replacements were basically drop-in replacements for existing T8 bulbs,” Fay says. “We did have to work with the contractors to find bulb replacements and fixtures for our stairwells, which are open to the general public in some cases and needed to be design-friendly for the folks in the building.

“They need to be aesthetically pleasing and provide good-quality light both in terms of lumen counts and (color rendering index). So we did a fair amount of work there.”

The decision to upgrade lighting on the exterior of the building created additional hurdles.

“One unexpected challenge involved those exterior perimeter lights. We had expected in the 21st Century that it would be rather easy to find a drop-in LED fixture. That took a little more work than we were expecting it to. We had to do some retrofits of the actual light fixtures ourselves, and we had to spend a fair amount of time finding new LED bulbs that would provide both the lumens and the quality of light that we were looking for on the perimeter of the building. It took a little more work than expected but it was worth it.”

Then came the issue of where to purchase the products identified as meeting the project’s goals for energy efficiency, aesthetics and security.

“After we identified what we wanted as far as the color and the warmth of the light, as well as the luminosity for the aesthetics and the security requirements, then it came down to finding that bulb and looking at the different sources we were allowed to buy it from,” Altermatt says. “The bulbs all had to be American-made, which is another one of our constraints.

“In the federal government, we have to purchase the majority of our products off the GSA schedule or from a GSA vendor, so our initial work was to identify the look we wanted as far as the color of the light and the luminosity. Since we were moving to LEDs, we didn’t have to worry about the energy consumption.” 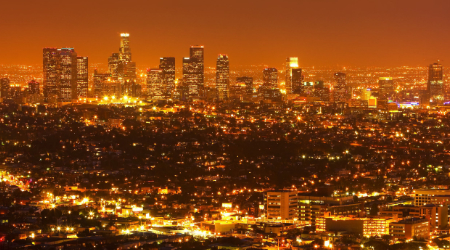