Whatever the Mequon-Thiensville School District might lack in sheer size it more than makes up for in its embrace of technology — in particular, LED lighting. The seven-building, 3,500-student district in Southeastern Wisconsin contains about 1 million square feet of space, says Kyle Thompson, the district’s director of buildings and grounds. Since his arrival in the district six years ago, Thompson and his staff have devoted time, energy and resources to maximizing each square foot to support learning.

“For a plant operations department in education, our number one goal is to create an environment conducive to learning,” Thompson says. “Our job isn’t just to heat and cool buildings and maintain them and shovel snow. So as we start looking at ways to achieve that goal, we also have to figure out how to do it cost-effectively. Lighting is real easy to retrofit and get those dollars that you then can reinvest into other systems.”

The department’s efforts have included a series of 10 lighting upgrades since 2011, each one designed to build on advances in LED technology for the benefit of students. The projects have served as a source of savings the department can devote to other facilities projects and a laboratory to learn from the potential benefits of LED technology.

The focus on lighting upgrades arose from Thompson’s realization that technology advances in LED lighting could mean benefits for the district related to reliability, lighting quality, and lower utility costs. For that reason, all areas of facilities requiring lighting became potential candidates.

“We do several lighting projects a year, and we look at everything — fluorescent lamps, parking lot lighting, pools,” Thompson says. “If it lights up, we talk to our (lighting) reps about what we can do from an LED standpoint to not only provide better lighting but more cost-effective lighting.

“Every application is a little different. We have some LED lamps that are direct-ballasted lamps, so we can take an old T8 lamp out and put in a new LED lamp in, and it fires up right with the ballast.”

Lighting retrofits “are the single simplest thing a building manager can do to get a good return on investment that allows you to reinvest those dollars elsewhere in the facilities,” he says. “Not only are we saving money on our electrical bills. In many cases, the local energy provider also is giving us cash incentives.

“That money doesn’t go into some magic piggy bank somewhere. It goes right back into the schools and allows me to paint a room or do something that doesn’t save me money.”

The relative simplicity of some upgrades also has been appealing to the 14-person department.

“I don’t have to hire a firm to come out and do the retrofits, to do electrical modifications so the building can accept LED lighting,” he says. “In many cases, I can take my light-bulb changer, hand him a case of LED lamps and have him go relamp a room. It can be as simple as opening a fixture, changing a lamp, cleaning the fixture and closing the fixture. No electrical work is needed in some applications. Some get more complex, but it can be a very simple process.” 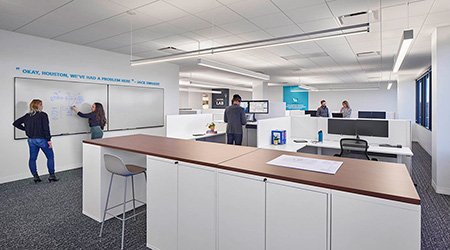