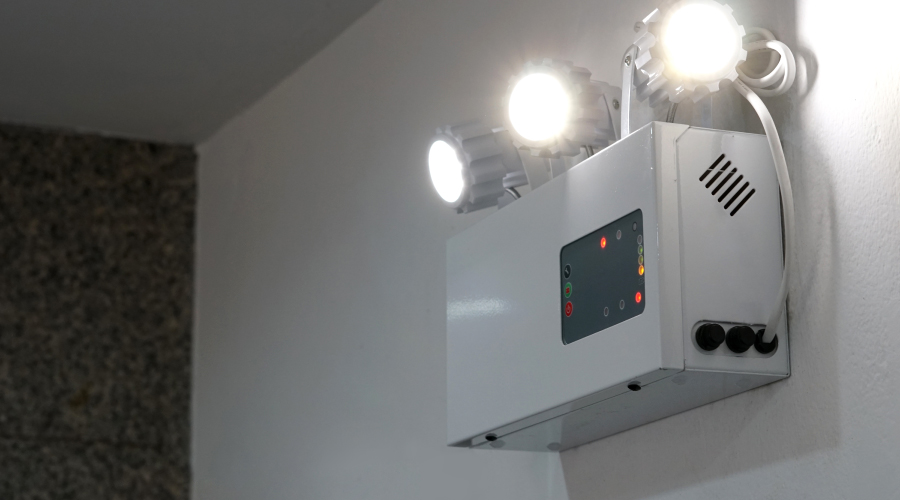 As codes evolve and change, technology is changing at an even more rapid pace. Here’s what you need to keep your occupants safe and sound.
By Maura Keller   Lighting

Stacy Carr, electrical engineer design leader at Stantec, says emergency lighting can be accomplished in two primary ways – use the normal space lighting with an emergency power source or provide separate dedicated fixtures that only serve the emergency purpose. While the two options have not changed much in recent years, advances in technology have brought change to both methods.

“The dedicated emergency fixture – often referred to as a bug-eye – historically used a pair of low-performing incandescent lamps paired with traditional lead calcium or nickel cadmium batteries,” Carr says. “Today, lamps are efficient, low-wattage LED-type and some are offered with lithium batteries and self-testing electronics. The result is high-performing, longer-lasting, yet smaller unit that can reduce testing and maintenance. Where normal space lighting is used for emergencies, we now have central battery inverter system options that can include self-testing and diagnostics with the option to email reports automatically.”

One of the most recent advancements in lighting has been Power Over Ethernet (PoE) lighting. As Carr explains, while there was a gap for some time when it came to emergency options for PoE lighting, the industry is now starting to see UL listed options for emergency PoE systems.

“So, while the concepts of how we achieve emergency lighting haven’t really changed, the technology and options have advanced,” Carr says.

Indeed, as Rachel Fitzgerald, senior lighting designer at Stantec points out, the lighting industry is constantly evolving, with rapid advancements in LED technology and new product offerings. These advancements extend into the realm of emergency lighting products and tools.

“Gone are the days of the old school googlie-eyed emergency lights. Emergency lighting units of today are smaller profile, sleeker in design aesthetic, even minimalistic; all while having optimized performance,” Fitzgerald says. “As a lighting designer, it’s nice to have more tools in the toolbox that can seamlessly integrate into design solutions. Not only have emergency lighting units evolved, but our options for standby emergency power have also advanced. Centralized inverter systems offer more options and abilities for design integration options that previously were limited to localized battery units or generators. These centralized systems give designers more options to use as emergency powered lighting, while keeping the system infrastructure centralized for ease of maintenance.”

And while LED has taken the lighting industry by storm in recent years, Richard Vedvik, P.E. senior electrical engineer at IMEG Corp., says he believes the biggest change in lighting systems is not the change to LED, but the way controls have migrated to a network-based approach.

“Modern controls utilize CAT5E cabling to wall switches and sensor devices with distributed power supplies and fixture controls. The benefit is cost savings in wire installation and also in control flexibility,” Vedvik says. “The challenges I see with these new systems are that each manufacturer has a proprietary system and the use of CAT5E cabling tends to result in a fairly messy installation when proper routing methods are not utilized.”

Kim Ward, healthcare architect and director of healthcare – South at Oculus Inc., says emergency lighting is a vital component in getting people out of a building safely and efficiently, therefore it is needs to be working properly.

“Not only is smoke an issue, but there are also other situations that may require evacuation. Smoke can obscure visibility, which is why emergency exits must be illuminated by signage to ensure people can be directed toward an exit,” Ward says. “However, I think the emotions of an event can confuse people, so they need clear directions to evacuate.”

In addition to lights that are illuminated through power or battery, there are signs that are photoluminescent — in other words, glow in the dark — for up to six hours.

“These signs make it easy to mark emergency routes and doors without relying on a constant supply of electricity,” Ward says

The historical approach to emergency lighting was to assign the emergency/egress lighting to “night light,” meaning that it was left on all of the time. As Vedvik explains, this concept made sense for fluorescent lighting, where lifespan was improved by leaving the lights on and avoiding switching with occupancy/vacancy and the limited number of controls for emergency lighting.

“But now we have more options for controls that allow the emergency/egress lighting to turn off when the building is unoccupied, and then come on full when power is lost or occupancy is sensed,” Vedvik says. “These controls can be distributed in the building, making them difficult to find.”

Another challenge facing emergency lighting techniques is with lighting levels and lighting coverage. As Vedvik explains, because the optical performance of lighting has evolved over the decades, so too has the required layout spacing and coverage patterns.

“I caution my clients from adoption a one-for-one approach to upgrading emergency equipment. A quick study can help ensure replacement efforts are properly executed without the need for re-work,.” Vedvik says. “I also caution clients from reusing existing emergency circuits if they suffer from code compliance issues.”

“This can get expensive and complicated fairly quickly,” Vedvik says. “Batteries can be unitized (distributed) or centralized and each comes with different costs and hassles.”

For Carr, one of the biggest challenges with emergency lighting is simply understanding the various options available.

“Each decision regarding which lights are used for emergency, what the emergency power source is, what options the equipment has, what lighting controls system is used, etc. all have an impact on initial cost, frequency/complexity/costs of maintenance, and ultimately the total life-cycle cost. Often the system with the lowest initial cost will not have the lowest total life-cycle cost,” Carr says.

One area that facilities managers continually need to stay on top of is the codes surrounding emergency lighting as it relates to location, building size, building purpose, and capacity.

That said, Carr notes that the code basics of emergency lighting requirements have not changed a lot in recent years. Generally, code stipulates that egress paths must have lighting that achieves a certain average illuminance with criteria like maximum or minimum ratios and that the lighting must have an emergency source (such as battery or generator) that can power the lighting for a certain duration.

A light meter is recommended to verify that existing emergency lighting systems provide adequate coverage of egress pathways.  As Vedvik explains, lighting designs try to account for light loss factors (LLF), which include yellowing of lenses and degradation of lighting sources. LLF can exceed the design intent, resulting in less lighting than is required.

“One area of specific concern is stairwells, which are required to have 10 foot-candles on all treads,” Vedvik says. “Classic stairwell lighting designs usually fall far short of this requirement.”

As far as staying abreast of codes, Ward suggests facilities managers be familiar with NFPA 170, which is a code that provides standard symbols that are used to communicate an emergency, including fire safety and hazards.

Carr further points out that facilities such as hospitals and senior living facilities may also have some specific variations related to emergency lighting.

“Code interpretation and enforcement lies with the local authority having jurisdiction, and interpretation can vary in some areas,” Carr says. There have been some specific code updates in recent years that mainly focus on recent technology advancements such as “directly controlled luminaires” which is now addressed by NEC 700.2.

“Once you know the referenced standards, set a regular schedule for maintenance and testing,” Fitzgerald says. “Both battery (including inverter) and generator systems providing standby power of emergency egress lighting systems for life safety shall be tested every 30 days. The diagnostic testing and requirements vary based on the specifications of the system. Keep those owner’s specification manuals handy to refer to for the specifics of your system. Also, budget and plan to hire commissioning or consultants to measure emergency light levels over the life of the system to verify compliance over time as LED lighting systems degrade and reach L70 end of life.”

One thing is for sure, the facility lighting industry is constantly evolving and changing. Both building codes and energy codes are driving changes in lighting design and lighting control systems.  As such, Vedvik says it makes sense to have appropriate staff participate in code update classes.  While it is not a requirement to constantly bring buildings up to current code, it is helpful for the facility leaders to understand why code is changing and what that means to the facility.

Code knowledge aside, besides the obvious task of changing traditional lamp types, the intensity of the lighting system should be evaluated. For example, as Vedvik points out, instead of re-lamping old fluorescent exit signs, a replacement to LED is recommended. And when the “bug eye” emergency lighting units need to have batteries replaced, an upgrade to a newer LED style should be used.  hat replacement, however, should include a study of coverage and not just rely on a one-to-one replacement which may not meet requirements.

Vedvik tends to like motion sensing controls that dim LED fixtures to 50 percent when no motion is detected. Because the life of an LED system is greatly extended when dimmed, the time frame for light engine replacement is greatly delayed. Additionally, the space will not go totally dark between periods of motion, which Vedvik especially prefer sin stairwells.

“And remember, floor plans and building usage can change, which can affect egress pathways.  When internal projects re-assign rooms and areas, a study of the impacts to the life safety plans, exit signage, and egress lighting should be included,” Vedvik says. “My recommendation is to look at the building holistically, identify deficiencies in coverage and in equipment age, and formulate a plan to systematically upgrade the building or campus. I recommend starting with high-risk areas and migrating from there.”

Maura Keller is a freelance writer based in Plymouth, Minnesota.