Besides controls, California’s Title 24, which promotes energy efficiency with regard to lighting, controls, and other building systems, addresses control and uniformity based on type of light source, and area controls, among other issues. Here is a closer look at both.

Control and uniformity based on type of light source. For years, Title 24 has contained what is colloquially referred to as an “a/b switching” requirement. Most enclosed spaces have two switches. They can be used to turn off half of the rows, or half of the fixtures (often arranged in checkerboard patterns of control), or even half of the lamps in each fixture. The actual code language called for the ability to achieve an intermediate level between 30 and 70 percent of power. That allowed for 1- and 2-lamp ballasts to be switched separately in a 3-lamp fixture.

The new Title 24 requires the ability to achieve three intermediate levels of lighting power for many fluorescent fixtures: 20 to 40 percent, 50 to 70 percent, and 80 to 85 percent, in addition to full on and off. The minimum strategy required for code compliance is to incorporate multi-step, stepped dimming ballasts in new or retrofitted fixtures. Additionally, control devices such as dimmers or photosensors are required that can drive those ballasts to each intermediate power range. Using full-range dimming ballasts automatically meets the requirement. That’s because any desired level can be achieved.

When this code iteration was finalized two years ago, full-range dimming ballasts didn’t yet meet the financial hurdle to be required by Title 24. As time goes on, though, unit costs for full-range dimming ballasts will continue to drop. Why not consider the ultimate in flexibility for control over a fluorescent lighting system by using fully dimmable ballasts? Besides, quickly switching between two significantly different levels of light is always jarring to occupants.

As for LEDs, the new code language requires all LED products to be dimmable in a full range of power from 10 to 100 percent. These days, many vendors supply LED fixtures with dimmable drivers, typically using the 0-10V protocol, whether the dimming leads are connected or not. The price points of these dimmable LED drivers are low enough that many fixtures now meet the California Energy Commission’s payback criteria, which is why the commission can require full-range dimming for LED products in Title 24.

Despite its length and complexity, Title 24-2013 does a great job of categorizing controls requirements. Some are a legacy from previous code iterations. There are, however, some extremely significant new and updated requirements that are designed to have a big effect on increasing lighting energy efficiency. One of them is:

Area controls. Most spaces are required to have local controls in the form of wall switches or dimmers. That generally makes sense, and studies have shown that when people are given options for locally controlling light fixtures, they typically use those controls to reduce light levels. However, local controls could be as simple as line-voltage switches for switch legs or low-voltage switches connected to a relay panel. Additionally, wall-mounted switches typically control large areas of light fixtures (control zones).

A better technique would be to use a comprehensive lighting control system that incorporates some form of local switches or dimmers. Often these devices can be connected wirelessly, even in systems that use wired connections for the actual fixtures. If the project can afford it, using a comprehensive system with such local control devices also allows the system to wring out maximum energy savings by using the entire gamut of control strategies, such as scheduling, occupancy, daylight harvesting, personal control, tuning, and demand response. 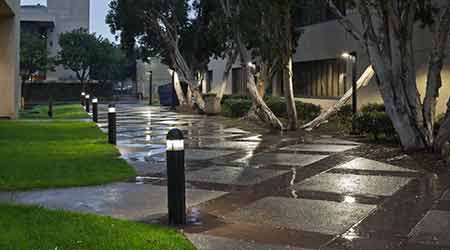