Which Buildings Will Save the Most with Duct Sealing? 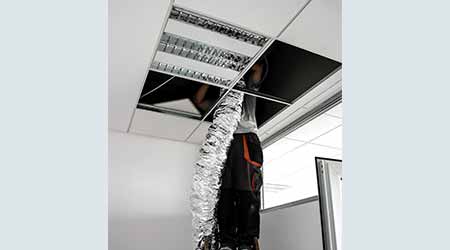 A new study from the Center for Energy and Environment (CEE), examining the viability of duct sealing in commercial buildings, revealed several criteria that could be used to help identify buildings most likely to realize significant energy and cost saving benefits from duct sealing. This is good news for most any facility manager but particularly helpful for those that find themselves continually battling energy-conservation skeptics.

The depth and breadth of problems caused by leaky ductwork is well established. A 2016 survey of building contractors conducted by the Building Commissioning Association found that nearly 75 percent of respondents believe that most buildings in the United State today have significant duct leakage. Nearly 70 percent estimate that leakage rates of 15 percent or more are highly likely or common. At the same time, field reports have documented hundreds of commercial building owners that have realized dramatic reductions in monthly utility costs through duct sealing. The U.S. Department of Energy estimates that Americans can save $5 billion dollars annually through effective duct sealing practice.

Still, not all buildings or duct systems are created equal. With this premise in mind, CEE conducted a study intended to quantify duct leakage problems in commercial and industrial buildings in Minnesota, and to identify building types mostly likely to reap significant cost-saving benefits through duct sealing projects. After screening and categorizing 63 initial buildings, researchers measured the duct leakage of 27 systems and then sealed 20 of these using conventional methods as well as a relatively new aeroseal sealing process that works from inside the ductwork to locate and seal leaks.

Data from the study indicated four main criteria for identifying buildings most likely to benefit from duct sealing. These criteria include:

• Operating Pressure: Operating pressure of at least 0.5” w.g. are acceptable, above 1.0” w.g. are preferred.

“Duct leakage can result in a major hit on buildings’ energy use and cause a substantial increase in operating costs,” said Quinnell. “Our study identified key criteria to pinpoint those buildings that are most likely to experience leakage, and consequently benefit the most from duct sealing.”

The study also found that aerosol-based duct sealing was typically more effective than traditional duct sealing (tape/mastic), especially when the ducts were insulated or access to the entire duct system was limited.

“Using aeroseal technology, the median sealing rate was 86 percent and often reduced effectively to zero,” said Quinnell. “Our study also predicts an average ROI of around seven years, achieved by first identifying the buildings best suited for sealing and then using the aerosol sealing process to do the work.”

John Dixon is a freelance writer who has covered building performance, mechanical engineering, and related topics.