Venturi Valves for Airflow Control in Labs: An Alternative to VAV 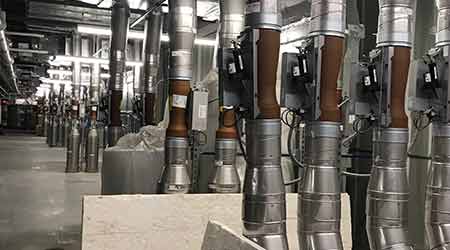 VAV boxes control the volume of heated or cooled air entering a space in order to manage temperature, humidity, and ventilation. The boxes are calibrated dampers that use a butterfly/blade device to regulate airflow into a space. VAV boxes function fine in thousands of buildings around the world. In an office building, for example, precise airflow control is not a matter of life or death, as occupants usually don’t notice the airflow variance. But, in a lab or other crucial environment, lack of precise airflow control can cause injury or death. That’s why venturi valves are increasingly being used for labs and other critical environments.

How problems can arise in VAV systems

VAV boxes receive signals to adjust their dampers from controls placed in the space, or from the building automation system (BAS). As the network of ducts leading from the central heating and cooling system typically includes multiple VAV boxes, this tends to create an inherent inefficiency in the HVAC system. Namely, as one VAV box receives a signal from the space it controls to increase or decrease the airflow into that space, the change in that valve’s position impacts the static pressure in the duct system. The other VAV boxes in the network must then adjust their settings to maintain the airflows their spaces require. Those changes, in turn, further impact the static pressure throughout the duct system, so the set of VAV boxes end up in a frequent state of re-adjustment. Likewise, the large central fans in the HVAC system must speed up and slow down to maintain adequate airflow volumes and pressure throughout the system.  The outcome is the fans and VAV boxes are all chasing each other as they strive to provide the appropriate airflows the building controls request.

A big part of the problem is the time delay (“signal latency”) between the airflow sensor in a VAV box, the building controls, and the VAV box’s actuator. By the time the VAV box sends a signal reporting its current flow rate, and the BAS processes that and sends a return signal to the VAV box’s actuator on the damper, the pressure in the system has already changed. Think of a long distance phone call to another continent, where you end up speaking over each other due to the delay in signal transmission.

This is a problem in labs, where adequate ventilation is essential for safety. A delayed valve response time can expose lab workers to airborne dangers, including toxic fumes and biohazards.

Additionally, since VAV boxes must sense airflow in order to adjust their damper positions, it is crucial that the sensor remains clean. However, as the airflow sensor lies fully across the air stream passing through the valve, the sensor is susceptible to fouling with lint and dirt, which degrades the valve’s control over time. To keep the valves operating properly, facility managers must regularly clean the airflow sensors, which results in higher maintenance and recalibration costs than other valve options.

When Precise Airflow Control Is Needed

Most of the time the situations above are not a big deal. But imagine a lab in which researchers regularly work with toxic chemicals. Before a work shift starts, the HVAC system is ventilating the lab adequately. The HVAC system includes a supply valve at the end of a duct run which is dispersing 1,000 cubic feet of air per minute (CFM), well within the valve’s operating range of 500 to 1,500 CFM. But, when a researcher starts working and opens the sash on a fume hood, the ventilation system immediately requires 1,500 CFM from the valve. The kind of delay with VAV boxes discussed before means the researcher could be exposed to unacceptable amounts of toxic gas if the valve can’t adjust fast enough.

What Is a Venturi Valve?

The venturi valve is a tube with a constricted neck, resulting in an hourglass-like shape. A cone inside the valve is able to move back and forth parallel to the valve’s body (and parallel to the air stream). The shapes of the cone assembly, the positioning spring within it, and the orifice of the valve’s constricted section are carefully engineered to regulate flow rates as the cone assembly moves forward and backward in response to demand and static air pressure changes.

As static pressure changes in the HVAC ducting, the spring/cone assembly instantly adjusts to regulate and maintain airflow (within plus or minus 5 percent flow accuracy). This “mechanical pressure independence” means the valve does not need to measure airflow, send a signal to the BAS, receive a return signal, and adjust the damper position via an actuator, as VAV boxes must do. Thus, the signal latency problem of VAV boxes is eliminated. This instantaneous action is similar to how the suspension springs on a car help ensure a smoother ride when it hits a bump. The car’s springs mechanically raise or lower the wheels immediately — without needing to measure the bump’s size and actuate an adjustment.

Some venturi valves are factory characterized. This means the manufacturer has calibrated the valve according to a precise data curve that relates the cone assembly shaft’s position to airflow volume, which eliminate the need to measure airflow in the field when the valve is installed. Such factory characterization provides higher turn-downs to achieve a number of stable, accurate room pressure states. In other words, the device has a wider range over which it can accurately provide the correct airflow. With this improved accuracy, labs can better manage ventilation and maintain air pressure relationships for worker safety and research/testing/production integrity, regardless of room state (occupied, unoccupied, or purge condition). Compared to VAV boxes, which have poor turndown ratios, venturi valves reduce reheat energy consumption.

To enable more researchers to pursue discoveries in life sciences and material sciences, Kansas University is building an integrated science building. As with any laboratory design, sufficient airflow control is crucial for protecting lab occupants from airborne hazards, such as toxic fumes, reactive gases, and pathogens — all common in labs such as this one.

The airflow control system design needed to account for frequent high demand loads to ensure safe air in a building with difficult-to-control spaces — numerous open labs and atriums — while also being energy efficient.

A key part of the HVAC system was more than 560 venturi valves, along with digital fume hood controls and electronic components linking the environmental control systems to a BACnet-capable BAS.

“Safety is the highest priority in any lab,” said Mike Russell, director of environmental health and safety at the university. “The lab ventilation system, along with its various connected hoods and exhaust devices must reliably capture, contain, and exhaust potential hazardous lab emissions.”

Dave Rausch, market manager for Phoenix Controls, has more than 20 years of experience in the building industry, including engineering and product management roles in airflow controls and fire suppression systems. He can be reached at drausch@phoenixcontrols.com.