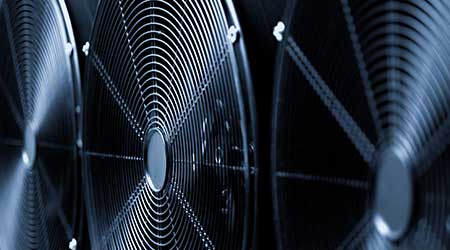 Engineers rely on manufacturers of HVAC products to tell them the electrical power consumption of their equipment – with the exception of fans.

Typically, the only information provided is fan speed (RPM) and fan power (HP) required at the fan shaft to turn at that speed. This would be sufficient if there were a well-documented way to calculate belt, motor, and variable frequency drive (VFD) efficiency losses. That information was hard to come by — until now.

The Air Movement and Control Association (AMCA) has come to the rescue with ANSI/AMCA Standard 207-17 for Fan System Efficiency (FSE) and Fan System Input (FSI) Power Calculation.  This standard provides tools that allow the engineering community to reliably compare the electrical power input of different fan system configurations at full and part load.

• Efficiencies for V-belts, synchronous belts, or flexible couplings and direct drive connections (which are considered to be 100 percent efficient).

• Three-phase induction motors within the scope of Energy Policy and Conservation Act for North America, as well as European and Chinese standards operating at up to 50 percent greater than nameplate power (1.5 service factor). This includes ODP and TEFC motors from one to 500 horsepower. Other types of motors are explicitly excluded.

• Pulse-width modulated VFDs programmed to maintain fixed ratio of voltage-to-frequency at or below synchronous speed.

One of the greatest benefits from the standard is that much of what was previously known about part-load system efficiency has been debunked.

We thought we knew that:

• Motor efficiency was relatively constant from full load down to about 30 percent load. Below that it dropped off quickly.

• VFDs had a fixed parasitic loss at all loads. Therefore, a motor combined with a VFD had low efficiency at low load. 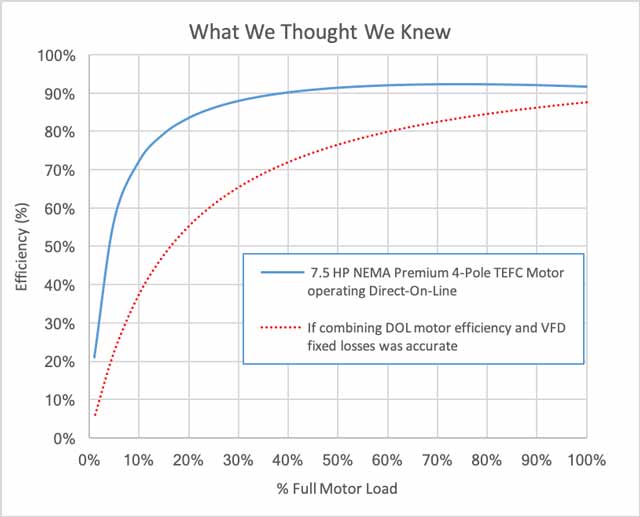 • A three-phase motor driven by a VFD that maintains a constant ratio of voltage to frequency is a very different system than a direct on line motor that always runs at 60 Hz. 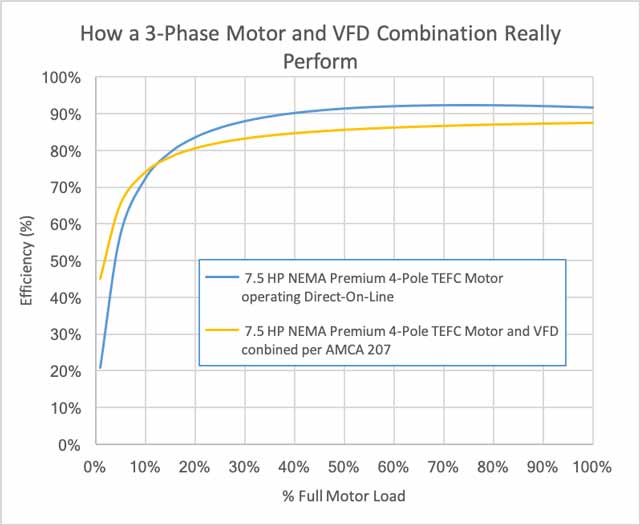 ECMs are not a magic bullet

ECMs first became popular in small equipment because they offer large efficiency gains when compared to the single-phase PSC motors that are typically used in fan coils, VAV boxes, and furnaces. However, those large gains do not apply when compared to running a regulated NEMA Premium 3-phase motor.  For these, an ECM will yield only a slightly higher efficiency thanks to its permanent magnet. Unlike single-phase motors, the ECM’s efficiency difference does not increase across the range of operation.

In a fan or pump system, the impeller is responsible for the vast majority of the system losses.  A slightly better fan wheel mounted to a 3-phase motor/VFD combo will often have a better wire-to-air efficiency than a similar ECM offering.  Until now, it’s been hard to compare the two since ECM fans are rated by their motor power input while conventional fans are rated only by shaft brake horsepower.  Designers and manufacturers can now directly compare the motor power input of both.

Using a larger-than-necessary motor is not an efficiency killer

One of the oldest axioms in the application of fan systems is that oversizing a fan motor will yield low efficiency when the fan is operating at part load.  In fact, some manufacturers will convert a smaller NEMA Premium motor and relabel it a “special purpose” motor with a higher horsepower, believing that will save energy at part-load operation.

In fact, when a differently sized 3-phase motor is coupled with a VFD, their power consumption for a given load is remarkably similar.

There is no doubt fan and air handler manufacturers will incorporate AMCA 207-17 into their selection tools.  Until then, an Excel spreadsheet tool is available and can be downloaded from www.york.com/fan-energy.  The tool does not employ macros, so it can be used by anybody with Excel. The tool allows users to directly compare up to four system configurations. Complete instructions are included.

For more information about AMCA 207-17, AMCA members should visit www.amca.org/store.