As businesses embrace environmental initiatives to save money, facility managers and building operators are feeling the pressure to increase building efficiency.

Free cooling, the process of allowing the building load to bypass mechanical cooling and exchange its heat with lower temperature outdoor air, is often positioned as an environmentally favorable approach that also helps save on costs.

Daikin recently simulated dry free cooling in two separate building environments representing light internal loads and high internal loads, to help determine the feasibility and value of free cooling in these settings. The simulation incorporated building data from several climates and geographical locations to factor in weather variation across the United States and modeled both integrated free cooling — where a water coil is directly mounted on an air cooled chiller — and standalone free cooling, where dry coolers are located separately from the air cooled chillers.

The results of the simulation suggest that free cooling cost benefits are often only realized in certain circumstances. Building type and climate dramatically impact the viability of free cooling, and in many cases, opting for standalone dry coolers rather than integrated free cooling may also positively impact cost savings.

This simulation focused on non-evaporative (dry) free cooling methods where the chilled water system directly exchanges heat through the use of an air-to-water heat exchanger, either integrated into an air-cooled chiller or through a standalone dry cooler. The two methods detailed here include: 1) integrated free cooling as part of the air-cooled chiller and 2) the use of separate dry coolers.

Integrated free cooling uses an additional coil, typically attached to the chiller on the outside of the primary condenser coil, to cool the process fluid using low temperature ambient air, as seen in Figure 1 below. Instead of mechanical cooling with refrigerant circulating through the condenser coil, the building process water is run through the integrated free cooling coil, which exchanges heat with the outdoor air to achieve either full or partial cooling of the building load before returning it to the building; in turn, this process requires less mechanical cooling.

Integrated coils also take up less space than a separate dry cooler, making them appealing to jobsites where space is limited. However, when not in free cooling mode, the integrated fluid coil causes air-flow restriction across the primary condenser refrigerant coil and therefore causes a derate on the chiller performance. The impact on chiller efficiency can be significant (in the range of 10-15 percent). 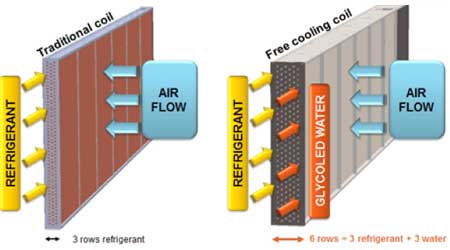 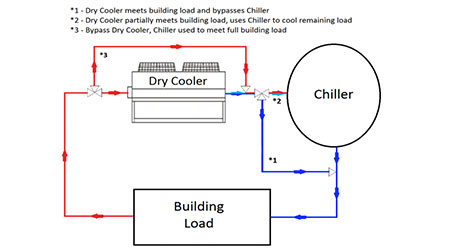 Both of these types of free cooling applications can use less energy than a chiller-only system at low ambient conditions where free cooling is viable, lowering energy use and operational costs during those times. The example below investigates energy consumption and operating cost of running a 300-ton air-cooled screw chiller with and without integrated free cooling, and with separate dry coolers.

Figure 3 shows the annual chiller energy consumption for the hospital model with integrated free cooling. It depicts the difference in chiller energy consumption between the cooler and warmer months. The cooler months are on the left and right side of the graph, and warmer months are towards the middle of the graph. A chiller will run most in warmer months when there is a cooling load on the building and temperatures are too warm for free cooling. There is not much potential for free cooling in the cooler months since the system load is low due to low internal cooling loads in the building. According to the usage graph, between the months of November and March we can see there is essentially no cooling load.

This suggests that free cooling requires colder climates to be effective, which is also seen in the difference between the blue and purple bars.

Figure 5 depicts the savings associated with integrated free cooling for each hospital location.

Note that none of the locations experienced net savings throughout the year with the inclusion of integrated free cooling, as seen by how the green line never surpasses the $0 line on the y-axis. The chiller is less efficient because of reduced airflow across the condenser, and the integrated free cooling coil in the summer months more than offsets any savings in winter months due to low run hours.

Therefore, integrated free cooling is not a value-oriented option for this scenario.

The purple line in Figure 5 shows that all locations, except Miami, showed some net savings throughout the year when using a separate dry cooler to achieve free cooling. These savings are relatively small in comparison to the overall cost of the dry cooler and will not be a strong indicator for implementing a dry cooler for the hospital simulation due to an excessively long payback.

Conversely, the data center analysis tells a much different story. This is largely due to the data presented in Figure 6, which shows the annual chiller energy consumption for the data center model with integrated free cooling.

Figure 6 shows that the chiller energy consumption throughout the year is more consistent compared to the hospital simulation. The cooler months are on the left and right side of the graph, whereas the warmer months are towards the middle of the graph. It should still be expected that the chiller will work harder in the warmer months to cool the building due to the extra external heat load on the building, which is evident in Figure 6. The more constant internal load in the data center simulation provides greater potential for free cooling in the cooler months.

Figure 7 shows energy consumption data for the data center simulation, which was conducted to simulate free cooling in a high internal load environment.

Per the hospital simulation, a chiller with an integrated coil that does not use the free cooling potential will consume more energy than a chiller without integrated free cooling. This trend is depicted in the varying heights of the red and blue bars, respectively, in Figure 7. St. Louis, Boston, Minneapolis, and Duluth were the only locations that showed energy savings when utilizing integrated free cooling in cooler months. The higher internal load in the colder months, as seen previously in Figure 6, provides greater availability for free cooling, thus leading to greater energy savings.

In summary, both climate and building type have a dramatic impact on the viability of free cooling using dry coils. In climates where the air is cold enough, and in applications where the number of wintertime run hours is great enough, both integrated coils and separate dry coolers can provide energy savings, but in all cases, energy savings with standalone dry coolers is greater due to the effects on summertime chiller performance. Building load profile is crucial in determining the viability of free cooling, as buildings with low wintertime loads will benefit less from any form of free cooling.

This simulation modeled the impact of integrated free cooling on chiller efficiency and performance throughout the year using meteorological data available to evaluate each of the ASHRAE climate zones. This analysis used Daikin’s EnergyAnalyzer II software with its EnergyPlus version 8.1 simulation engine to model a 300-ton air-cooled screw chiller system. The methodology used the performance of a commercially available chiller with integrated free cooling to describe the efficiency derate information presented in this paper. Hourly data was pulled into the model pertaining to dry bulb temperature (T_DB), chiller load, and the electricity consumed by the chiller, whereas the total annual kWh for both chiller models was calculated. Some assumptions were used in this analysis, including:

The percentage of free cooling assumed was taken from the understanding that dry coolers can only meet full load capacity when outdoor dry bulb temperature is 7°F (3.89°C) lower than the desired leaving chilled water temperature. Assuming a normal 44°F (6.67°C) fluid temperature for comfort cooling, the outdoor temperature would have to be less than 37°F (2.78°C) to get full free cooling. Between 37-42°F (2.78-5.56°C) it was assumed that 50 percent free cooling was achievable for simplicity of simulation.

Robert Loflin is a chiller applications engineer for Daikin Applied.

Click here for more information on Facilitiesnet.com about chillers.