The Case of the Clogged Coil

“Too warm.” “Too stuffy.” “Not enough air flow.” These were just a few of the complaints facilities managers of the Basic Medical Science Building at the University of New Mexico were receiving on a regular basis.

“Too warm.” “Too stuffy.” “Not enough air flow.” These were just a few of the complaints facilities managers of the Basic Medical Science Building at the University of New Mexico were receiving on a regular basis. The poor performance of the 40-year old HVAC system often resulted in lectures being moved outside or canceled altogether. And the situation in lecture halls and research rooms serviced by Fan 67 had become particularly dire. The coil in that fan was completely clogged. According to Elmo Riggs, facilities supervisor, “You couldn’t see through it, or hear through it at all.”
It was determined it would take $500,000 to replace the coils in all five fans serving the building. And that was just the cost of the installation. But a simpler and much less expensive solution was found: Steril-Aire UVC light emitters on the downstream of Fan 67’s cooling coil to clean the coil of its sticky, gunky biofilm buildup.
While many of the facilities managers were skeptical that this could even remotely improve the situation, they gave the green light. If the UVC worked, they would then install them on the remaining five fans. A third-party test and balance company was hired to perform baseline air-handler tests including measuring air flow, air/water temperature and static pressure drop.
The air quality in every room serviced by Fan 67 improved. Within weeks, complaint calls from professors were down. After 60 days, follow-up tests were performed with the following results: 992 CFM gain (increase of 14 percent), 0.07 inch static pressure reduction, 300,685 BTUH gain (208 percent increase) and Dry Bulb/Wet Bulb separation gain of 78 percent/50 percent.
And after 270 days, another follow-up was done and revealed that the airflow was up 30 percent. In addition, Terry Anderson, university industrial hygienist, performed carbon dioxide measurements in a room served by Fan 67. In the corner of the room furthest from the ductwork, the air change per hour had doubled, even though the occupancy had also doubled.
Riggs has his own spin on how well the UVC worked. “You can carry on a good conversation through the coil in Fan 67 now.” Not long after the results of the experiment were known, the remaining five fans in the building were outfitted with Steril-Aire UVC.

Haughton Middle School complex in Haughton, La., had a standing seam metal roof that was not performing properly and the Bossier Parish School Board wanted it gone.

Whether the issue is a snowplow that breaks down during a winter storm or chillers that stop working in summer heat, malfunctioning equipment can cause major headaches for maintenance and engineering departments.

In the aftermath of the 9/11 terrorist attacks and subsequent shootings at college campuses, Western Michigan University officials decided to strengthen the university’s overall life-safety, property protection and emergency preparedness program. 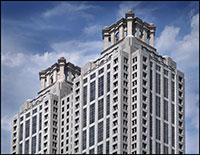 As the fourth tallest Class A office building in downtown Atlanta, One Ninety One Peachtree Tower is an icon of the city’s skyline. Built in 1990, the 50-story, 1.2 million square foot building was in a period of decline in the early 2000s, with occupancy rates dropping to just 20 percent after it was sold by its original owners, Cousins Properties.