When load drops, a VRF system slows the compressor rather than cycling it on and off. This can improve the efficiency of the system and prevent early failure.

In applications where building loads vary, most HVAC systems regulate the amount of cooling produced by cycling the unit’s compressor on and off. But cycling a compressor has two major drawbacks.

For one thing, compressors are most efficient when they are running constantly. Cycling reduces the overall efficiency of the system, and since most systems operate at part load the vast majority of the time, efficiency is significantly reduced.

Cycling is also hard on compressors. Every time a compressor is started, the in-rush current — which again is greater than the current the compressor draws while running, even at full load — heats the compressor’s windings and can lead to the eventual failure of the compressor.

Variable refrigerant flow (VRF) systems operate differently. Compressors in VRF systems are driven by a VFD, also known as an inverter. When loads in the system decrease, the VFD slows the compressor until its output matches the load, eliminating the frequent cycling common in conventional systems. Eliminating the cycling improves part load operating efficiency and extends the service life of the compressor.

VRF systems are most widely used in heat pump systems, particularly those that supply refrigerant to multiple fan coil units or other applications with multiple zones. Each zone has a metering device that controls its flow of refrigerant based on the demand of that zone. The VRF compressor senses the demand in the entire system and regulates its speed through the use of a VFD to control the refrigerant it supplies. This ability to match compressor output to system load increases the part load efficiency of the system while allowing a more flexible design to improve comfort.

In addition to applications where part load conditions are common, VRF systems are ideal for use in applications where loads vary by occupancy, zone, or building orientation. For system designers, VRF systems offer flexibility. Designers can select different types and sizes of fan coils and other terminal devices to better match the loads presented by a particular area or zone in the facility.

There are limitations that must be factored into the design of a VRF system. There is a limit on how far the most distant device can be located from the outdoor compressor and condensing unit. Similar restrictions exist on differences in elevation between the highest and the lowest located indoor devices. Because VRF systems pipe refrigerant through occupied spaces, the systems must comply with ASHRAE standards for refrigerant safety as well as local codes. 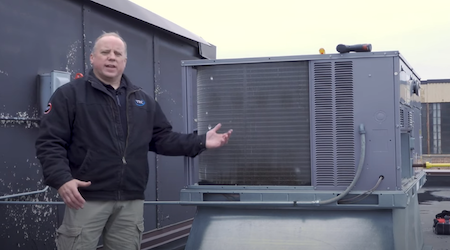 How to Clean a Packaged Roof Top Unit