Replacing one chiller is difficult enough. Replacing four chillers while the facilities they serve remain open and operational is a challenge most maintenance and engineering managers might try to avoid.

The maintenance department in the Hernando County School District in Brooksville, Fla., decided to undertake such a challenge in 2007, and the results have had an impact on both the department's operations and the school district's bottom line.

"It was a little bit of both," says Sean Arnold, the district's director of maintenance. "We could see the bills were adding up, but it was also on our list of changeouts for our five-year plan."

Long-range planning also played a role for the department, which is responsible for maintaining about 5 million square feet and consists of 100 employees in the trades, safety, security, and warehousing areas, as well as 200 custodians.

"Life cycle was a big consideration," Arnold says. "They were getting toward the end of their useful careers, and they were having multiple breakdowns. We had quite a few compressor changeouts, and they were showing signs that it was time to be changed out, rather than continue to pump money into them to repair.

Teamwork and communication also helped the department make the needed preparations for the replacement project.

"It was a committee decision, and it's really based on our five-year plan," Arnold says. "We look at all the equipment throughout the district. We look at how well they're performing (and) whether they're hitting any type of life-cycle (mark) to where it's time for them to be changed out. Then we make a decision based on the budget as to which ones we can change out."

"It's multiple buildings tied around a central courtyard," Arnold says. "All of the original buildings were built in the 1980s, and then in about 2006, there was a two-story, tilt-construction (building) added."

Removal and installation of the chillers lasted about one week and took place in the winter, which meant students were in school. Despite their presence, no major setbacks occurred during the project, Arnold says. One potential problem did arise, however.

"An unexpected challenge was that when we removed the old chillers, the pad was a little smaller than we anticipated," he says. "So we had to modify the pad to accept the new chillers. We had to modify some bushings on the pad of the chiller itself and the surface they were being mounted to had to be extended a little bit. "

Perhaps the most complex challenge the project presented was that it took place while students were in school, meaning the department had to plan for the removal and installation in ways that minimized disruption to school activities.

"That was a huge challenge," Arnold says. "I'm sure it did interrupt in a minimal way in some buildings as we were making these changeouts. But we replaced each of the four chillers one at a time. We'd pull the old one out and put in the new one. So the downtime for each of the chillers was very minimal. If we had pulled out all of the old chillers and installed the new ones, instead of a day of interruption, it could have been a full week of interruption." 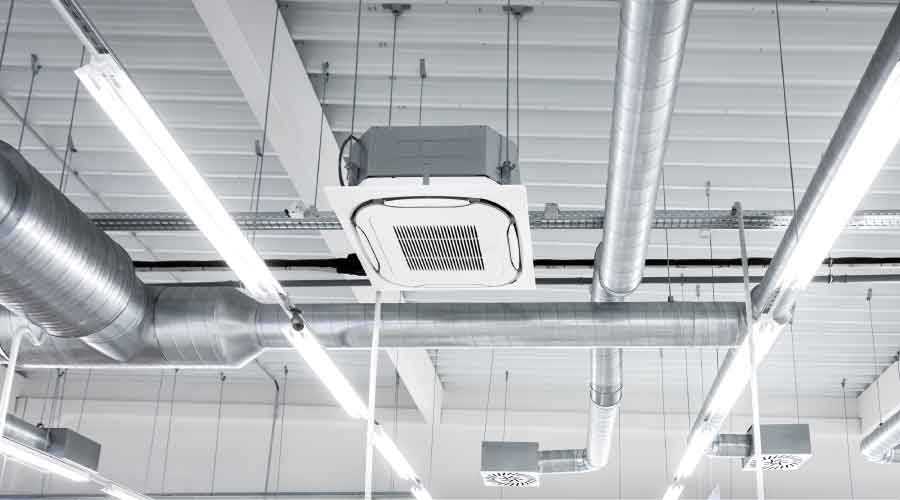