In a multitenant building, "one of the higher barriers is, who benefits?" says Charles Culp, a professor in the architecture department at Texas A&M. Tenants would see energy savings, but they can't authorize the work. "The owner and the tenant have to see a benefit between the two of them." Finding a win-win isn't necessarily difficult. Owners may see the building's value increase, Culp says, while owners and tenants can work out deals to share costs and savings.

A study by Texas A&M's Energy Systems Laboratory concluded that a typical building can save 10 to 40 percent on energy costs by operating more efficiently. Buildings on the higher end of that range have problems to begin with, Culp says.

However, Audin says, "it's almost impossible to turn an older building into a high-performance building without major retrofits," such as all-new ductwork to meet air circulation requirements.

A facility manager "probably is going to have the most detailed understanding" of the issues, Bobker says, "but (he or she) doesn't have the power to do it unless there's support from the top."

"The edict should come from above the guy who has to do it," says Audin. "If it's not from the vice-presidential level, chances are someone's going to blow it off."

Expect some resistance as changes are made. "The first thing you'll hear is that's not the way we've done it for the last 20 years," Audin says. "It has to be done in a way that won't increase negativity." He recommends bringing in an outside consultant; building staff should work closely with the consultant.

If a facility hires an outside firm to do an energy audit, Culp says, a critical factor is how well the firm works with the on-site staff. "It generally takes a day or two to build confidence," he says, which is vital, because "the internal people are going to determine the end success of it."

Once changes have been made, Culp says, they must be monitored. "You want to do it forever, because you do see degradation of savings over time," he says.

An important part of the facility manager's job, Bobker says, is to make sure employees get the training they need, so that a technician can read a graph, for instance. "It's quantitative skills for people who have been more machine-oriented," he says.

Policies are also important. "A lot of stuff falls apart if there are not good specifications," Audin says. He cites a university at which workers in each building were able to set the thermostat where they wanted it. Putting the acceptable setting in a manual makes it "the law."

It also makes it clear that technicians won't get blamed. Audin says federal buildings specify that air conditioning may not be set lower than 78 degrees, and "no matter how much people complain, it's not their decision." A manual "may take away responsibility people have not handled well, or it may give them responsibility because they know someone has their back," Audin says.

The trick, of course, lies in running a building as efficiently as possible while keeping its occupants comfortable. "If someone gets chewed out two or three times because there was a special event at night and the air conditioning cycled off, they may decide it's just easier to run it till nine every night," Harrison says. 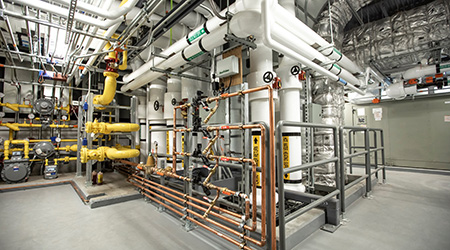