Proponents say under-floor air distribution systems can cuts costs and improve comfort. Critics cite problems. Both are right: The difference is in the details

The design of the modern office building is being shaped by rapidly evolving technology. Facilities should be able to adapt quickly to new technologies and changing business missions. But one system has not kept pace with the growing demands of the modern workplace: conventional cooling technology.

Typical cooling technology used in the vast majority of office buildings is overhead variable air volume, or VAV. With VAV, air is supplied through metal ductwork to terminal units (also called VAV boxes) located in the ceiling. The VAV boxes respond to space thermostats to supply the required amount of conditioned air, usually at 55 degrees Fahrenheit, to maintain space comfort. Air is generally returned to the mechanical room through the space above the ceiling, referred to as the return plenum.

The conventional approach is familiar to owners, designers and contractors; it offers a 30-year track record and proven operational efficiency. But there are two drawbacks. One is low ventilation effectiveness. Because the supply grills and the return grills are in the ceiling, there is a certain amount of short cycling of air; in other words, the supply air goes up the return without doing any work to cool or ventilate the space.

The other disadvantage is the high cost for renovations after occupancy. With the cooling system above the ceiling, and constructed from sheet metal, renovations routinely require the removal of ceiling systems and the installation of new ductwork.

What’s more, properly designed under-floor air distribution systems provide more effective ventilation. Introducing supply air at the floor and returning it at the ceiling effectively removes contaminants from the space. Unlike conventional overhead VAV cooling, there is no opportunity for short cycling of the supply air. All the air has to go through the space to get to the return.

At this point, the biggest disadvantage of under-floor air distribution systems is that designers, owners, tenants and contractors aren’t familiar with the approach. A building is a long-term investment, and nobody wants to experiment with a technology they think is unproven.

Another barrier is the misperception that buildings with under-floor air distribution are more expensive. On the contrary, if implemented properly, buildings with under-floor air distribution can be designed and built for virtually the same cost as one with a conventional design. Part of the reason is counterintuitive. When under-floor air distribution is incorporated into a building design by an experienced team, the floor-to-floor height can be reduced by 6 to 12 inches. In a building with conventional overhead cooling, the floor–to-floor heights are usually set by the beam-to-duct interface at the core wall. Supply ductwork, return ductwork and sprinkler pipes compete for space at the core, and generally dictate the amount of space required above the ceiling. A typical ceiling plenum ranges from between 20 and 24 inches below the structural beams.

The air leaks were sealed, and the leakage rate fell below 5 percent.

Other concerns have arisen about under-floor air distribution systems. In some cases, occupants have complained about being too cold. Conventional overhead VAV uses nominal 55-degree supply air to maintain space conditions in the room at 72 degrees and 50 percent humidity. Cooling air to 55 degrees wrings out moisture and keep the humidity levels acceptable.

Under-floor air distribution systems, on the other hand, use nominal 63-degree supply air. The problem is that, if supply air from the cooling coil in the air handling unit is at 63 degrees, not enough moisture is taken out of the air to keep the humidity within acceptable levels.

The answer is to use a system called coil “face and bypass.” In this system, most of the air is passed through the cooling coil and cooled to 55 degrees to wring out the moisture, but some air bypasses the cooling coil to blend with the 55-degree air, raising the temperature to the required 63 degrees. Outside air should be pretreated to remove humidity to make the face and bypass approach more effective.

The reason for the higher supply air temperature with under-floor air distribution is occupant comfort. Years of research and use in Europe have shown that 63 degrees is the best temperature. Using 55-degree supply air draws occupant complaints about comfort.

It’s also a mistake to use reheat to raise the supply temperature to 63 degrees. It is not code-compliant and will result in huge energy bills.

Another objection to under-floor air distribution systems is that they are too quiet, so that occupants can be distracted by overheard conversations. With under-floor air distribution, the air is delivered at extremely low pressure and low velocity. As such, there is none of the usual background white noise associated with overhead VAV. If speech privacy is important, then a sound masking system needs to be included in the tenant design. These systems are relatively inexpensive and consist of a sound generator and speakers spaced above the ceiling.

Concerns have been expressed about mold and other contaminants. In our firm’s experience, this has not been a problem. Of course, the underfloor plenum must be extensively cleaned after construction, and the cooling system must be properly designed to dehumidify the air. Mold requires moisture or elevated humidity levels. A leaking pipe under the floor is another potential source of moisture. The use of leak detection systems in specific areas is recommended.

There is also concern that under-floor air distribution poses a life-safety risk. If smoke is developing under the floor, it will be distributed into the space. We are not aware of any instance where this has happened. A modern code-compliant office building will have space smoke detectors as well as smoke detectors in the mechanical rooms. There is some talk in the industry about adding smoke detectors under the floor, but so far model codes don’t require them.

So how does a facility executive decide if under-floor air distribution is right for a project? The best applications are for general office space, especially space that is reconfigured frequently. Spaces that are not good candidates for under-floor air distribution include kitchen and food preparation areas, laboratory space, central storage and loading, fitness centers, dining areas and child care centers. 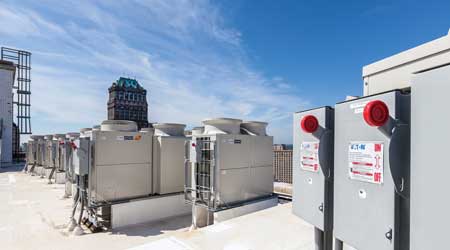