By Charbel Farah   HVAC
OTHER PARTS OF THIS ARTICLEPt. 1: Taking A Systems View Of HVAC Upgrades Can Lead To Bigger BenefitsPt. 2: Refrigerant, Water, Air Leaks Can All Lead To HVAC ProblemsPt. 3: Economizers, Heat Recovery Can Help Reduce Demands On HVAC Systems Pt. 4: How Lawrence Berkeley National Laboratory Used An HVAC Systems Approach To UpgradePt. 5: This Page

Built in 1954, the historic Capitol Records Building in Hollywood, Calif., is a 13-floor high-rise designed to resemble a stack of records topped with a stylus, reflecting the mission of its namesake. Known as the world's first circular office building, the 150,000-square-foot structure has to contend with Southern California's sun all day long and from every possible building exposure.

Heating and cooling issues began to surface with the building's original, maintenance-intensive fan coil system. The circa 1954 HVAC system was deemed unacceptable by the owners, as it presented operational problems and occupant discomfort throughout the circular-shaped building.

After an evaluation of the building, an upgrade was scheduled during the last few weeks of the year, when Capitol Records has a reduced workload, but still required the building to remain operational.

Completed in two phases, the project began with the removal of the existing chiller plant and the installation of a new state-of-the-art chiller plant to satisfy both current and anticipated loads.

During the project's second phase, fan coils, and ductwork were replaced, while new chilled water distribution was provided to each of the building's 13 floors. This proved to be a challenge because of the shape of the building and the fact that the placement of the mechanical equipment was on the outside of the radius in a 22-by-38-foot soffit. Controls were all retrofitted and outside air was ducted, while air handling units were upgraded and pumps were completely replaced. Existing pneumatic controls were replaced with a new DDC system in the plant and throughout the 13 floors.

A follow up one year later indicated that the heating and cooling issues were completely addressed with the upgrades.

In the Fall of 2008, the California Public Utilities Commission published the Long Term Energy Efficiency Strategic Plan, which outlined a bold goal for future energy savings: all new residential (including hotels and multi-family housing) and commercial construction in the state had to achieve net zero energy use by 2020 and 2030, respectively. A net zero energy building is one that generates at least as much energy as it consumes.

As net zero energy use looms on the horizon, it has begun to reshape California's HVAC industry, demanding new and innovative energy performance strategies. The 2013 California Energy Code mandates that all commercial buildings constructed in 2030 and beyond will have to be net zero. Strategies to consider, in addition to optimizing the building envelope, include photovoltaic solar panels (the easiest way to generate electricity in Southern California), wind turbines, and ground-coupled water source heat pumps to reject heat from the HVAC systems, and water harvesting. This California mandate may spark interest in net zero mandates nationwide and ultimately worldwide. 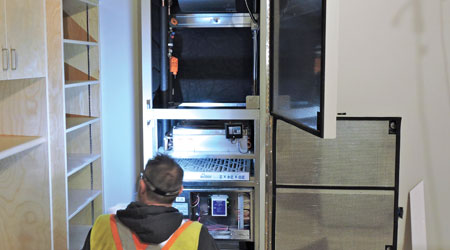 Next Generation of HFC Alternative Refrigerants Are More Environmentally Responsible