A Clear Path to Snow Removal

The right arsenal of equipment, backed by planning and preparation, can keep facilities operating when winter storms strike

Unfortunately, predicting snowstorms is never an exact science. So as colder weather approaches, grounds care managers have to rely on more tried-and-true methods to ensure their facilities and campuses remain accessible when a snowstorm hits. Often, an effective snow removal plan combines the right equipment with preparation and a little bit of technology.

In many cases, equipment forms the backbone of snow and ice removal plans for institutional and commercial facilities. Keeping versatile equipment on hand and ready to go is key to success for Lowell Neuhaus, landscape manager at the University of Nebraska at Omaha, which consists of two 80-acre campuses that are home to 16,000 college students. Neuhaus and his crew are responsible for all the snow removal on the campuses and call in a private contractor to plow the parking lots when more than 1 inch of snow falls while classes are in session.

“You have to be prepared for anything,” Neuhaus says. “In my experience, there have never been two snowstorms that were exactly the same. Something is different every time, whether it’s the moisture content of the snow, the time of day, or what’s happening that day.”

Neuhaus’ crew relies heavily on seven tractors, which can be equipped with brooms, blades or blowers. The brooms can handle lighter snowfalls, Neuhaus says, but his crew switch to blades or blowers when the snowfall is heavier or faster than usual. The crew also uses:

Mitchell Hintze, grounds maintenance lead for the six campuses of St. Luke’s Regional Medical Center in Idaho, follows a strict zero-tolerance policy when it comes to response to snowfall.

“If a flake hits the ground, we are there,” he says. “A hospital environment is one that has to be kept as safe as possible.”

Hintze and his crew are responsible for walkways on campuses, including the main campus in Boise, which covers 27 city blocks. In some cases, the department rents a front-end loader/skid steer, and it owns several tractors equipped with plows, a rear-mounted de-icer spreader, and a riding mower equipped with a blade and a rotary broom. Using four plow trucks, four skid steers, two loaders and a dump truck, a contractor handles curb-to-curb snow removal, with oversight from the grounds department.

But crews use shovels to do the most important work — clearing stairs, ramps and other pedestrian areas where tractors and plows cannot operate.

“This is actually a higher priority than some of the drives and parking lots,” Hintze says. “We have employees literally coming and going at all times, with the variety of shifts that medical staff uses. Also, who knows when folks are coming to the ER, to visit?”

Steve Stevenson, grounds supervisor for the Colorado Convention Center in Denver, which sits on 12 square blocks, also believes in stocking up on equipment. He recommends keeping on hand “everything — since every storm is different.”

His four-person crew keeps the area clear of snow with a front-end loader, a pick-up truck and a tractor equipped with plows, a tractor and two sweepers equipped with snow brushes, and three snow blowers.

“We run the heck out of our snow brushes since they get right down to the pavement,” Stevenson says. “If the snow is deep, we run the plow first and then run the brushes.”

Preparing for the Storm

It is not all that uncommon for crews to be removing snow for 48 hours or more at a stretch, so preparation is essential.

“We take about three days in early October and mount all the plows, change hydraulic fluids, filters, and such, and get everything ready,” Hintze says. Operators store all pieces of equipment in covered or sheltered areas to protect them, and they wash and dry equipment such as spreaders every time they apply ice-melting chemicals.

One high-tech piece of equipment that Hintze maintains carefully — one he says managers often overlook — is his cell phone, on which he gets calls for emergency situations or changes in priorities. During snowstorms, he takes fully charged spare batteries with him on rounds so he never loses contact with hospital staff.

Stevenson says his department takes a similar proactive approach with equipment, parking everything inside that fits. Preventive maintenance — including pressure washing the equipment on warm days — also is important.

“All through the snow season and the off season, we are starting things up, checking fluid levels, and so on,” Stevenson says.

Neuhaus says he does not have the luxury of storing all of his equipment inside. Small motorized equipment can be stored inside heated garages, while the large equipment must stay outside. The crew does what it can to protect the engines, though, plugging them in when they are stored and keeping anti-freeze products on hand.

“The campuses are within a mile of each other, so it’s not usually a problem,” Neuhaus says. “When we have equipment go down, we can go out with a truck and pick it up right away and get it back to the shop.”

Even armed with well-maintained equipment, crews will not be able to stay ahead of a snowstorm if they are not organized and prepared. Stevenson says he has learned it is important to get started on snow removal as soon as the storm starts in order to avoid being overwhelmed.

“If it’s snowing so hard that all you can do is keep paths and steps open, at least you are providing an egress and showing a concern for public safety,” he says, adding that the biggest mistake managers make in cities such as Denver, which frequently gets pummeled by snowstorms, is going home, then not being able to get back because of the heavy snow accumulation. Instead, he recommends keeping as many people on site as possible during a storm.

Hintze spends a good deal of time planning routes for snow removal, a process that is not as simple as plowing the most heavily traveled areas first, because the hospital’s campuses are located in residential areas, he says. Instead, snow removal often must be done as discretely as possible, taking care to operate large machinery at times that will not upset neighbors.

Equipment operators also must consider hospital operations. A hospital campus never truly has off hours, he says, which makes the job for operators more difficult.

“There are people everywhere at all times here, and we have a tough job and are on stage at the same time, with people literally all around us,” he says. “We have to do the job so they can be safe, while at the same time keeping them safe from accidents.”

Neuhaus learned the hard way that it is pointless to try to predict when snow is going to hit, so it makes no sense calling extra people in before snow start to fall.

“I’ve tried to anticipate a snow storm start, but the problem you have is that if [weather forecasters] are wrong, you’re wasting labor,” he says. “Now I just talk it up — make sure everyone knows snow’s coming — and then call people in as I need them.” His biggest concern is making sure workers are not on the clock too long and, as a result, overtired. 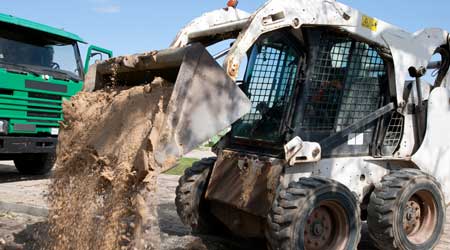 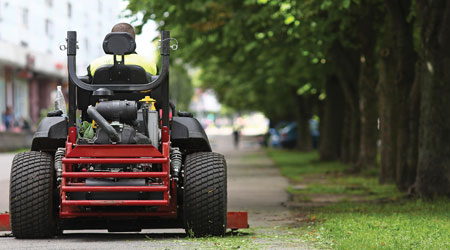