An increasing number of institutional and commercial facilities have embraced a host of sustainable grounds management practices, partly in an effort to control the flow of stormwater on their properties. One Eastern U.S. city has invested in a much larger and more complex undertaking that seeks to prevent runoff from overwhelming its sewers and polluting local waterways

Philadelphia is now in the seventh year of a 25-year project designed to fulfill an agreement with the U.S. Environmental Protection Agency (EPA) to reduce by 85 percent Philadelphia’s combined sewer overflows, according to Yale Environment 360. These overflows occur when heavy rains overwhelm the capacity of the city’s sewage treatment plants to handle the flow from storm and sanitary sewers, forcing the diversion of untreated effluent into the system’s river outfalls.

Read: Strategies for curtailing water use and managing stormwater

Integrated into the city’s green spaces, streetscapes, and public and private buildings, this green infrastructure ranges from simple home rain barrels and downspout planters to complex bioretention swales underlain by drains, filled with sandy soil, and planted with resilient species of grasses, perennials, shrubs, and trees.

Along with rain gardens, tree trenches, green roofs, and urban wetlands, this infrastructure will, as one study put it, “optimize and engineer the landscape” to mimic and restore its natural hydrologic regime. In the end, Philadelphia hopes by the mid-2030s to create the largest green stormwater infrastructure in the United States.

In six years, the city’s water department, collaborating with environmental groups and civic associations, has completed 152 publicly funded green stormwater infrastructure projects. Some 300 more are in the works in schools, parking lots, parks, and on rooftops.

The department has developed a network that engages students in environmental monitoring and data collection. It has initiated a Green Homes project, put together handbooks for developers and contractors, and is working with an AmeriCorps group to engage 18- to 26-year-olds to collect litter and leaves from green infrastructure sites. 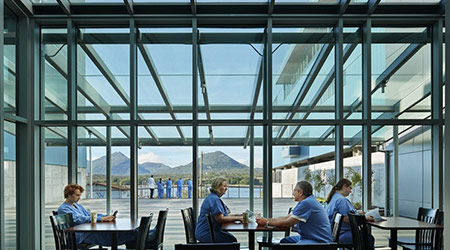