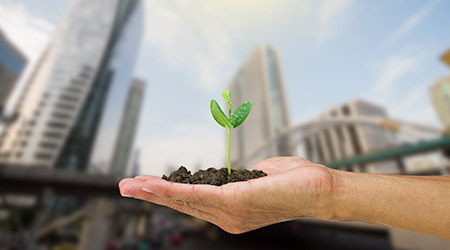 Many facility managers have become immersed in sustainability in the last decade, thanks largely to growing pressure from top executives and occupants to minimize the impact of their facilities on the environment. The rising popularity of the LEED rating system also has contributed to managers’ embrace of green building issues.

But what about occupants? How many people who work in facilities really know what a green building is or what the LEED emblems found on thousands of structures across the country signify?

It turns out not many, according to a report from the U.S. Green Buildings Council (USGBC). Mahesh Ramanujam, USGBC’s chief executive, hopes with a new awareness campaign, the public will better understand the impact of green buildings on greenhouse gas emissions and climate change and push for more buildings to be environmentally sustainable, according to the Minneapolis Star-Tribune.

Only 11 percent of study respondents associated “green building” and “green space” with creating an environment where people can live longer and healthier lives, according to the first in a series of Living Standard public research reports from the USGBC. The response is a problem since so much greenhouse gas emitted into the environment and is adversely affecting the planet comes from buildings, Ramanujam says.

In the United States, buildings make up almost 40 percent of carbon dioxide emissions that can come from the combustion of fossil fuels that provide heating and cooling and lighting and that power appliances and other equipment.