One of the most innovative aspects of the Bean Federal Center solar installation is the inclusion of a photovoltaic lab, which compares and contrasts different types of solar technology. The lab elements are part of joint research conducted by the Department of Energy (DOE), Sandia National Laboratories and New Mexico State University on which panels are best for the climate in the Midwest. The lab, which is part of the overall roof system, includes:

Other technologies used include hot water solar collectors. The Bean Federal Center uses two types: three flat-plate systems and one excavated tube system. This is another example of the GSA choosing varying equipment to compare results. Both types are closed loop systems. The flat plates use 100 percent water that circulates through the system and feature a temperature sensor along with a heat exchanger, which is necessary to transfer the heat generated from the solar system. If it gets too cold and is in danger of freezing, the water in the system automatically drains back below the roof line to a tank. Each of the flat plate systems produces 55 million BTUs annually.

The excavated tube system has a heat exchanger to transfer the heat and, with a 50 percent propylene glycol solution within the system, can handle colder temperatures. This system produces 55.1 million BTUs annually.

Of course, any solar installation is much more complex than simply installing the panels on the roof, and the Bean Federal Center was no different. While conducting survey work to see if the Bean Center's existing roof could take on the load of all the new components, the project's A/E firm determined that the roof was overstressed. This meant the existing roof had to be demolished and a new roof system needed to be installed.

The old roof was a membrane roof with a stone ballast. At the time of demolition, there was a weight restriction on the roof — no more than 2,000 pounds every 50 feet — which made it more difficult to do the demolition work. The team had to make sure they were within the guidelines of that restriction, which meant demolition became more of a manual process.

The team had to review options to figure out what would be ideal, and ultimately decided on a new Inverted Roof Membrane Assembly (IRMA) roof system. With an R-50 insulation value and a walking paver system on top, the IRMA roof provided a walking surface, making it possible for the rest of the work to be put in place. Because the building, with more than 5,000 occupants, remained in operation throughout construction, much of the work was performed at night to minimize any impact to staff.

Complicating construction further: While installing the solar panels on the roof, there was an ice storm. Unfortunately, some of the panels took the brunt of the storm and the construction team had to make sure that they were not compromised. After crews were able to finally clear the ice from the panels, they saw that there wasn't any damage but the ice removal would delay the project schedule. There was roughly 4 to 10 inches of ice on the roof — rendering it similar to an ice rink, and therefore construction had to be shut down in the interest of worker safety. To accelerate the process and meet the anticipated project turnover date of April 30, 2011, the team brought in an ice-melting machine to get the roof safe to work on once again.

Finally, there was the process of trying to get inverters on the roof. Inverters are the boxes that take the direct current from the solar panels and create an alternating current before shifting the electricity over to the transformer. Each of the inverters was 500 kW. The transformers were required to bring the energy down to an acceptable building usage load of 480 V. It was a challenge to get all of the inverter and transformer equipment on the roof and, due to the weight restrictions, a crane was not feasible. The project team had to conduct a helicopter lift to get the inverters and transformers in place. While this required that the entire building be shut down, the lift was performed over a holiday weekend so that no one was impacted. 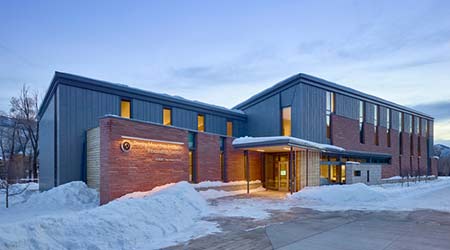