Before Hurricane Wilma, the campus featured many mature, non-native trees, such as Ficus, that did not withstand the high winds, Devaney says.

"I looked at (the hurricane) as a blessing," he says, adding the college was in the midst of formulating it collegewide sustainability efforts and that Wilma came at a time when the campus was looking at implementing a new sustainable landscape policy.

"A lot of the trees that were left were trees that we were looking to remove," he says. "So we replaced a lot of those with Florida natives, like gumbo limbo and Florida live oak, and mahoganies. A lot of these native trees will withstand storms in the future." The process of removing old trees and planting new trees, done with a combination of contract services and in-house staff, took a couple of years to complete.

"Between the South campus and the satellite (campuses), I'm sure I have an additional 500 trees, and the North and Central campuses actually had more damage than I did," he says. "Collegewide, I'm sure we've planted over 1,000 trees since 2005." The campus also has added many native plantings and gardens, as well as newly landscaped areas around facilities coinciding with new construction and major renovations.

"When you come down to it, the irrigation systems were just old, so it was time to look at them and replace them and update them with newer technology," Devaney says. "It gave us better control over the watering of the campuses, when you combine it with the rain gauges and remote control systems."

In addition to the upgrade, the campus changed some of its other watering practices, including changing the source of water used for irrigation.

"In some locations, we were using potable city water," Devaney says. "By switching over to using the lakes we have our collection systems — a lot of drainage from the parking lots goes into lakes we have around the campuses — we now can pull irrigation from there. And we've added wells. That allows us to pull water up out of the ground rather than use municipal water."

The increased attention to a sustainable landscape included renewed attention by Devaney to the impact that building renovations and new construction can have on the surrounding environment.

"If it's a new site, we have to do a study of the new site to see how it's going to affect drainage in the area — a design for moving the water from the footprint of the building and the parking area," Devaney says. "Once that's all done, we can start to look at the design of the building and the construction process. Then we look at hiring, through the general contractor, a landscape company that will come in and put together a design. So I give them a list of plants and a copy of our landscape policy so they know what we're looking for."

Devaney says the process of minimizing the impact of such projects on the environment has become easier in recent years as awareness of sustainability has grown in general.

"Many (contractors) are so familiar with LEED certification and the whole process," he says. I'm happy to say it has become second nature to most of them. Ten years ago, nobody really knew what LEED was." 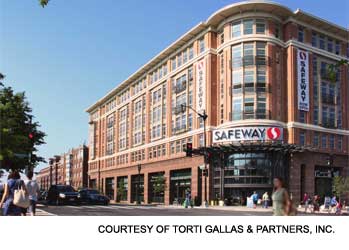