Water is becoming increasingly expensive. Here's how to measure, benchmark, and reduce use.

So it’s more important than ever that facility managers know how their buildings consume water, and use new tools and technology to benchmark and reduce water use.

To begin with, there are a range of national efforts, tools, and programs available to gather information on water use by commercial and institutional water users. From federal and state government initiatives, to individual cities and local groups, benchmarking and water efficiency audits are becoming more common. These benchmarking efforts are beginning to build a comprehensive picture of how much water is used per square foot of floor space or other unit of measure, such as number of hospital beds, number of hotel rooms, etc. Audits of commercial buildings for water efficiency are also being promoted by many water utilities across the nation. These water conservation audits provide a picture of how water is used by commercial and institutional facilities.

Although these efforts are bearing fruit, many in the facility management community may not be fully aware of these studies and their benefit to their knowledge base for facility operations. Therefore, it’s important to look at what these studies tell about how buildings use water inside the facility. Facility managers must also understand how geography impacts cooling tower and other outdoor uses, what available benchmarking data shows, and how to use this information to determine where a building stands.

Energy benchmarking has a long history. Efforts over the last 30 years to benchmark energy use most frequently report energy use per year per square foot of building space. Because energy use is closely tied to the floor area, this makes sense.

The most widely reported parameter of benchmarking has been gallons of water per square foot per year.

However, for most water-related indoor uses, the use is related to the people that use the water or to water using equipment, not floor space, except for water use in cooling towers for air conditioning. This means that, in addition to the benchmark metric of gallons per year per square foot, other metrics may be more descriptive. Examples include:

Comparing the benchmark of gallons per square foot per year to other benchmarks shows that examining appropriate functional denominators is critical. For example, upon examining hotel water use in a major city, one hotel was found to have extremely high water use per square foot, but low water use per room. The hotel, a beautiful old facility located in the center of the city, was built at the turn of the last century. There were no conference facilities, or swimming pool, and only a very small breakfast restaurant. Plumbing met water efficiency codes, but the facility’s well-appointed rooms were much smaller than what is commonly found in newer facilities. This would result in many more toilets and showers in the same square footage as a modern hotel.

In 2017, the Department of Energy reported water use for the first time in its Commercial Buildings Energy Consumption Survey, often called CBECS. (See chart “National Water Use Benchmarks.") The information is for the year 2012. Consumption is primarily reported in gallons per square foot, but also per worker. Benchmarking efforts are growing rapidly. From Boston to Austin, San Antonio to Seattle, New York to Minneapolis, water use benchmarking studies are underway. The following is a list of some of these efforts.

Facility managers can take advantage of these programs to benchmark their own operation. Check to see if the Better Buildings Challenge or 2030 District programs are in effect in your area.

Facility managers should conduct a study of how water is used within their facility, either through a water efficiency audit by professionals or through a self-audit. Energy Star’s Portfolio Manager provides an excellent tool for benchmarking both energy and water. South Florida Water Management District’s self-audit program, found at http://bit.ly/wateraudit, is another option. As well, both BOMA and IFMA have information on what to look for when benchmarking facilities as well as guidance on water efficiency.

Beyond guidance, there are many technology tools available to the facility manager to measure and quantify use. The most important of these is a water meter that provides real-time information. For decades, the “dumb” water meter that was read only once every one or two months was the only thing available. Many real-time water metering systems are now available on the market.

To metering, add the implementation of water use control technologies, including conductivity controllers on boilers and cooling towers, weather-based automated irrigation systems, and leak-detection devices in critical areas to alarm when the floor is flooded.

All new national plumbing codes (Uniform and International Plumbing Codes) now require submetering of major water-using components within a facility such as cooling tower makeup and blowdown, boiler feed, and irrigation. They further require that for larger facilities, meters be connected to the facility utility dashboard so that the facility manager has real-time data. Advances in metering technology now make this possible.

Water utilities across the nation are rapidly changing how they meter water. They are replacing the dumb meters with advanced or automated metering infrastructure. This new generation of water meters uses connectivity either through cell phone technology or telemetry to directly connect meters to the water utility’s dashboard. Many utilities are establishing portals so that facility managers can access this data.

In the era of rapidly increasing water and wastewater rates, limited water supplies in many areas, and heightened water efficiency ethos nationally, facility managers should ensure that they are aware of these benchmarking and water use breakdown efforts, and more importantly know where their facilities stand relative to similar facilities. Just as with energy information, entities wishing to lease space or concerns wishing to purchase properties are now looking at the facility’s water footprint as an indicator of the property’s marketability. This article has only summarized current efforts. The importance of knowing where your property stands and where it should be with respect to water use will only increase in the future. n

Bill Hoffman is president of H.W. (Bill) Hoffman & Associates, LLC, and has more than 40 years of water conservation and water resource planning experience. He has been involved in the development of water conservation legislation, water efficiency codes and standards for IAPMO and ASHRAE, and new rating tools for both LEED and Green Globes. He can be reached at billhoffmantx@earthlink.net.

Email comments  and questions to edward.sullivan@tradepress.com. 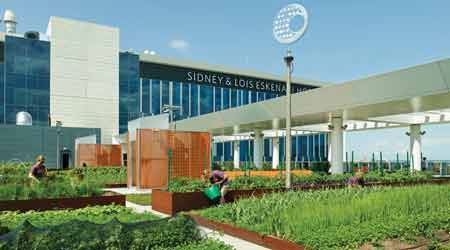