When occupants started moving in to the new facility, GSK's facility management outsourcing provider had staff serving as "concierges," to help people find their way around the building, answer questions, and help find and reserve conference rooms, available workspaces or necessary equipment. The concept proved so popular that the concierges are still in place long after the initial move-ins were finished.

A similar concept is the new IT help desk. It's modeled on Apple's "Genius Bar" concept, so employees can simply come up to the desk and get help or pick up, say, a charger to replace the one they lost or left at home. The model has not increased IT spending or time commitments, and has proven to be enough of a success that the company is going to put it in place in nine more locations over the next few months.

There has been some resistance and reticence to fully adapt to the new building; Milora says there were those who would've soon been in line for an office who weren't happy to find out that wasn't going to happen. But employees were given a choice of relocating to the Navy Yard or the suburbs or working from home, so most of those who chose to go to the Navy Yard knew going in what they were signing up for.

Then an interesting thing happened, Milora says. About a week after the new building started being occupied, requests started coming in from employees from other offices to relocate, even though moving their work location from the suburbs or home to the city of Philadelphia would cause them to be subject to the city's wage tax of just under 4 percent. In other words, people were suddenly willing to take a pay cut to relocate to the new office once the word of what working there was like started getting out.

It is a completely different way of working, Milora says, and it's helping in a number of ways. He recently had to have what he described as a "difficult" conversation with one of his team members, but instead of doing so in a conference room with each of them on one side of a table, they went to the landscaped roof and talked there.

"You go on a roof with someone when the sun's out, the weather's pretty nice, and you're overlooking the wharf at the Navy Yard where all the decommissioned ships are — you can have a very difficult, but very different kind of a conversation," Milora says. "That's what this building has enabled us to do, is to change the way we're able to interact." 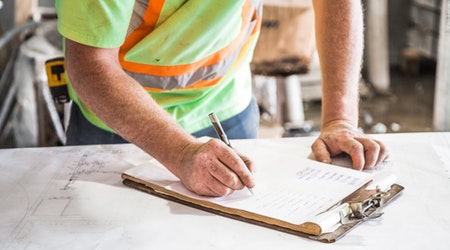