By Naomi Mill&agraven, Senior Editor   Green
OTHER PARTS OF THIS ARTICLEPt. 1: Never Too Early to be Better at the InterContinental San FranciscoPt. 2: This Page

Despite all of this success, it's not all green lights for Hobbs. An early goal for Hobbs was to prove that 50 percent of the energy spend could be saved in a new building. Pitting his new building against the success story of the Empire State Building, he was hoping to do it in six months with 35 measures that would have cost $1.5 million. A dozen ESCOs looked at the proposal and did ASHRAE Level 1 and 2 analysis so Hobbs had evidence that 50 percent savings in a brand new Title 24 building was possible. But when it came time to get the project on the capital budget, there were conditions that made the owners balk, like 5-year ROIs and first liens against the mortgage. It wasn't a total loss, though. He got an agreement for $250,000 per year in capital to implement all the measures that made sense.

Since opening, the hotel has gone from an Energy Star score of 64 to 87 and has earned LEED-EBOM Gold. But Hobbs says there's still plenty to do. He thinks that LEED Platinum is achievable and that the objective ought to be net zero energy.

Continuing to chip away at the energy spend, other projects have included retrocommissioning the airside economizers, adding a waterside economizer, adding variable speed drives to the chilled water, and adding software to the BAS that tracks how every piece of equipment is performing against design and reports if there's an anomaly.

"I believe in persistent commissioning," Hobbs says. "I'm an advocate for it at almost any point in the aging of a building. It just turns up so many opportunities."

Never Too Early to be Better at the InterContinental San Francisco 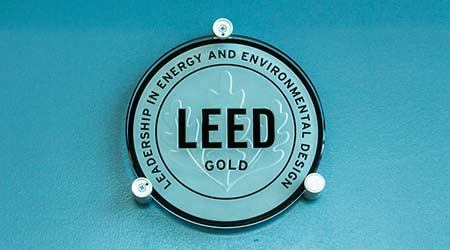