In the pages of this magazine, as in the trade media at large, you frequently read success stories about fancy, new ultra-efficient high-performance buildings. These buildings push the envelope on what’s possible in terms of how buildings are designed, built, and operated. But then, silence. There’s rarely any follow-up to explain how these buildings continued performing after the scrutiny ended and the ink dried on all the breathless magazine stories about them. So to remedy that, what follows are updates on two government buildings, the National Renewable Energy Laboratory’s (NREL) Research Support Facility in Golden, Colo., and GSA’s Federal Center South Building 1202 near Seattle. In both cases, these buildings have continued to meet efficiency goals.

Hailed as the largest net-zero energy building in the world, this now 360,000-square-foot facility (it opened in 2010 at 220,000 square feet, but a third wing has since been built) was a subject of coverage in February 2010 and again in October 2012. The LEED Platinum building is net-zero energy — its energy use intensity (EUI) has been consistent for the last five years, at about 35-36 kBtu/sqft/yr.

“The key is not to rest on your laurels,” says Shanti Pless, senior energy efficiency research engineer for NREL. So the building has been able to maintain its ultra-efficiency with a range of high-performance operations initiatives. Many have been focused on occupants, as the building has filled to more than 95 percent capacity — the headcount is about 1,300.

One important strategy was retooling the dashboards in the lobby to make it clearer to non-engineers how the building is performing. “Even the director of NREL didn’t understand,” says Pless. “So he tasked us with developing a next-generation dashboard so he can know in five seconds if the building is on track.”

Also, to get occupants involved, NREL developed a Building Agent App for everyone’s laptop which allows occupants to provide feedback. The original purpose of the app, says Pless, was to tell occupants when they should and shouldn’t open windows. It’s evolved from there, though, to allow for satisfaction surveys, feedback on whether a space is too hot or cold, and any other issue facility managers should be aware of. “We’ve learned a lot about how buildings can talk to occupants and vice versa,” says Pless. “We want to engage occupants to do good if they want to, but not all occupants want to.”

As an example, occupants have to turn lights on manually everywhere, either task or overhead — the default mode for all lighting is “off.” If they leave a space or their desks, vacancy sensors turn lights off. “We think this is the right combination of occupant engagement and controls,” says Pless.

Additionally, because plug loads are such a high percentage of the total energy spend for a net-zero energy building, occupants use smart power strips that provide power for 11 hours. The occupant pushes a button on the strip to get 11 hours of power and then it shuts off all devices. If occupants need more, they simply press the button again.

The goal regarding occupants, says Pless, is to create localized solutions that work for individuals. “Everyone’s different, so there’s no single solution for everyone,” he says. This includes glare controls and glare screens, desktops fans that run from USB ports, task lighting, and flexible office furniture.

“The building was supposed to be smarter than the occupants, but we soon learned that wasn’t the case,” says Pless. “No one ever gets controls to be perfect.” So giving occupants the ability to control their spaces and provide feedback has been a key to not only the building’s net-zero energy goals, but also occupant satisfaction.

The building also now has a sophisticated fault detection system that alarms if a control sequence is manually overridden. And Pless says a major initiative in the last six months has been to convince IT staff to be more aggressive in decommissioning old equipment in the building’s data center. This has had a big impact on energy use, he says.

Keeping a more careful eye on the PV systems has also been a focus. “We only have 365 days of production, so if you lose one day, that can be impactful to net-zero goals,” says Pless. Although the PV system is still grid-tied (meaning it doesn’t work if power is lost), Pless says one of the plans for the future is to create a micro-grid and therefore the ability to island the building. “We’re investigating this possibility now,” he says. This, like being as efficient as possible (especially in the data center, where the power usage effectiveness, or PUE, is about 1.2), is a resilience strategy — the more efficient a building, the longer it can run on backup power. Soon, Pless says, he’d like the building to be net-positive — to be able to either store energy or to send it back to the grid.

“We are continuously striving for improvement, for both meeting our net-zero energy goals and to demonstrate to the building industry how it can be done,” he says. 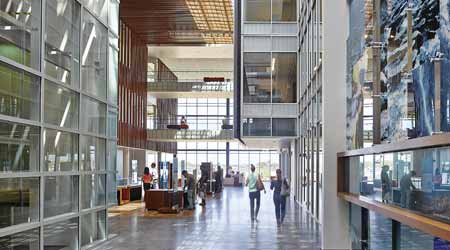 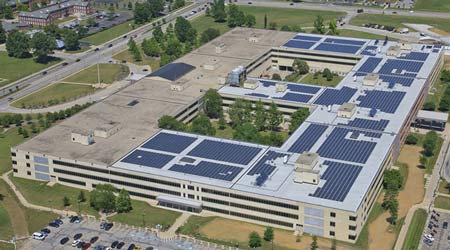