Tulsa-based Oral Roberts University (ORU) is a Christian university with 3,500 students. Founded in 1963, the university is named after its late founder, evangelist Oral Roberts. The campus sits on 263-acres, which includes 2.4 million square feet of commercial property known as CityPlex Towers. Built in 1981, CityPlex Towers is now a large hospital/office space complex, but it was intended to serve as a Christian research hospital, City of Faith Medical and Research Centers. The three towers were originally built as a 60-story clinic, a 30-story hospital, and a 20-story research center.

Today, the facility is primarily leased as commercial office space under the name CityPlex Towers. Inefficiency was rampant, which is why ORU/CityPlex invested in a $7.5 million energy efficiency project in 2007-2009 that included a lighting retrofit, new chiller, new cooling towers, and a new roof. This started a downward trend in energy consumption.

When David King came on board 2010, CityPlex Towers was still operating on systems designed for the original hospital — not for office space. With the 2007-2009 upgrades in place, David was able to focus on processes, equipment, and systems outside the central plant for energy efficiency. What a difference 4 years makes.

Once we had better control of our AHU hot decks and cold decks, we found it difficult to control the steam pressure during summer months due to the grossly oversize boilers that are still needed for the 300,000 square foot hospital. We removed one of the two 2,500 horsepower (hp) boilers and replaced with a 700 hp boiler that provides enough heat for the winter months and a 60 hp boiler for the summer months. The other 2,500 boiler is now only used as a backup.

In May 2013, King became the director of energy management for both Oral Roberts University and CityPlex Towers, and began migrating the same technology to the campus:

In the last four years, ORU/CityPlex reduced the annual electricity consumption by 32,000,000 kWh and peak demand by 4,000 kW, all while adding a new 31,000 square-foot Student Center on campus!

“With 40-plus utility bills, the only way to keep this many invoices manageable is to have them organized in an energy management portal, like the Energy Management System (EMS) THG Energy Solutions offers.  The EMS is huge time saver and reporting tool for executive management. No spreadsheets.  THG’s EMS helps identify anomalies immediately, which may have otherwise gone unnoticed for months,” says King

Having the full support of the ORU C-Suite has given King’s energy management initiatives legitimacy and well-earned trust.  “I've learned a lot about energy management in the last four years. For me, the big takeaway has been that paying for energy isn’t just the cost of doing business. It takes an intentional, strategic approach. That’s what David brought us. Board members with energy experience were astonished by the numbers I was reviewing with them. We’re talking 50 percent savings in just a few years. We have now established buy-in with our CFO and Board; we're excited about some of the new ideas on the horizon,” says Tim Philley, chief operating officer for Oral Roberts University. 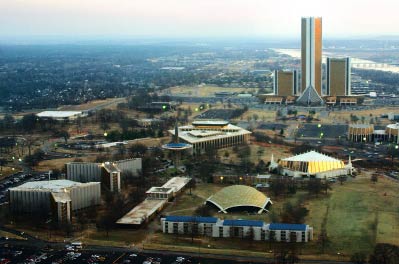