On April 14, 2018, at Jackson Recreation Center, Baltimore’s department of general services (DGS) co-hosted by recreations and parks (R&P) held a hiring event for facilities and fleet positions. The event was an inter-agency collaboration that was supported by the department of human resources (DHR) and the mayor’s office of employment deployment (MOED). The Ready Set Hire (RSH) event for DGS was the result of having prolonged hard-to-fill vacancies that were causing a slower turnaround of maintenance request. It was decided to conduct a hiring event to fill hard to hire vacant positions. Through this event, DGS was able to fulfill its vacancies, increase social media following, and learn how to improve its hiring practices.

Several positions that DGS wanted to fill during the event had been open for an extended period with no or few qualified candidates applying. DGS learned this was due to a lack of association. Mechanics typically seek out car dealerships and manufacturers for work, where the building trade positions seek out local employers or construction companies. Human resources had relied on people locating the positions on the city’s website and word of mouth. In order to create an association and promote an employment opportunity, an advertising campaign was started. Utilizing the in house talents of Alison Lynch, she crafted marketing material and came up with the branding Ready Set Hire. Using the city’s social media platforms (Facebook/ Twitter) the event and the open positions were advertised. T-shirts and directional signage were also created,. These advertising materials were designed so that they can be reused for future RSH events.

With a 10-week timeline and limited financial resources DGS and R&P would create a plan for success. Enlisting help from MOED, who had put on hiring events in the past, the team would learn from their success and challenges. DGS and R&P met regularly to discuss the event’s status. Tereina Galloway, working closely with Alison, would coordinate the communication between agency members and the community. Despite not paying for advertisement, DGS’ flyer was viewed by over 30,000 times on Facebook alone. During the month preceding the event, page engagement rose about 300 percent, with the average page engagement increasing from 1,751 to 4,355. The event was also marketed on the television at no charge and on radio.

Finding a suitable location to hold the event would prove to be a challenge. The building had to be ADA compliant, have WiFi, be spacious enough to separate candidates through the hiring phases, and be a convenient location for applicants. In search for a suitable building, several schools and recreation centers were considered before the team settled on Jackson Recreation Center, which was able to accommodate the event free of charge.

Utilizing the in-house created marketing materials, the team communicated the desire to advertise throughout the city. Tereina was able coordinate the distribution of posters throughout the city by asking coworkers to take RSH materials to distribute as they traveled for city business.

On the day of Ready Set Hire, DHR welcomed candidates and explained the process. Those who met the minimum qualifications were directed to apply and were prescreened. Interviews were held first come, first served, with the last interviews being at 4 p.m. After the event, DGS HR completed candidate scoring forms, notifying division chiefs to determine top candidates. Within two business days of their interview, top candidates were notified of next steps, including background check and a physical, which was held within a week due to previous communication with the city’s vendor and prescheduling the appointments in advance. DGS was able to support Rec & Parks by identifying causes for delays in their hiring process and reduced the delay by rerouting applicants and DGS team members, decreasing wait times.

As a result of Ready Set Hire, the City of Baltimore Department of General Service was able to interview 47 candidates, hire 11 facilities and maintenance employees, and achieve the department’s goal. This allowed for the completion of a month’s worth of interviewing to be achieved in a day and overall cutting the duration of the hiring process in half. Advertising RSH on the city’s social media platforms led to a 300 percent increase in page engagement and over 30,000 views of its flyer. Recreation and Parks were able hire over 300 employees, which included all of their seasonal hiring.

DGS learned how to leverage resources to reach larger pools of candidates. It will do this by advertising open positions through social media platforms (Facebook and Twitter) and by working even closer with the mayor’s office of employment development when positions become vacant. 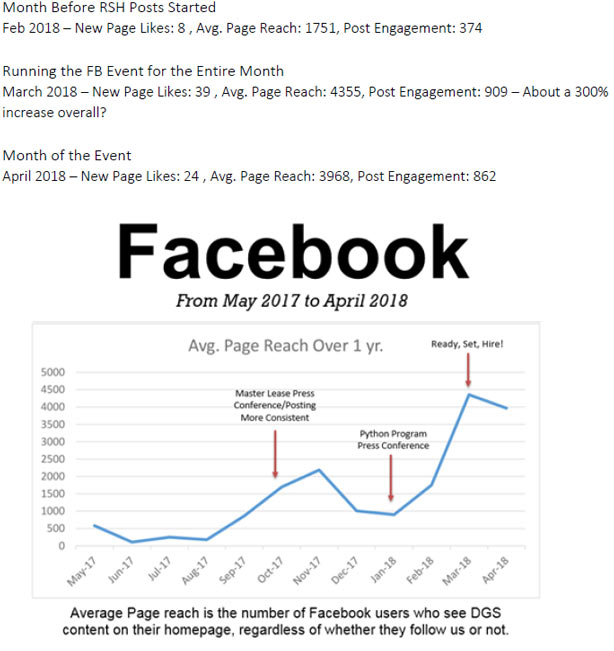