From its Boston headquarters, Fidelity Real Estate Co., a unit of Fidelity Investments, oversees the 10 million square feet of office space around the globe that houses the company’s 31,000 employees. Bill Whistler, senior director of interior design with Fidelity Real Estate, believes employees’ workplaces should convey the company’s egalitarian corporate culture. When it came to carpeting, however, it was difficult to consistently find designs that accomplished this goal.

So Whistler took a new approach to working with carpet mills. Rather than simply settle for colors and patterns that only somewhat fit Fidelity’s corporate culture and needs, his team decided to partner with several mills.

Fidelity didn’t provide a set of specifications that spelled out exactly what it was looking for, such as a specific color or logo design — the typical process when a client requests designs outside a mill’s regular offerings. Instead, Fidelity’s team conveyed the design and aesthetic direction in which it wanted carpet mills to head.

The mills used this as a starting point to develop carpet patterns specifically for Fidelity. In the end, two firms, Interface Inc. and Lee’s Carpets, were chosen to partner with Fidelity.

“They (Fidelity representatives) said, ‘You know how your machines and yarns work and how to make a quality product. Use your creativity to design something that fits what we’re looking for,’ ” says David Oakey, president of David Oakey Designs, which handles design work for Interface.

Fidelity’s corporate culture is reflected in the physical space. Few employees have enclosed offices. Of those that do, none are located along the perimeters of buildings. This allows the majority of workers to share the natural light. Employees’ office furniture is of high quality but not ostentatious. The color palette used to decorate the office space consists of warm, rather than bold or dark, colors.

“Our culture is non-hierarchical and open,” says Whistler. “It’s welcoming, not formal or pretentious.”

Fidelity also strives to fit into the surrounding environment. A campus outside of Dallas is surrounded by mesquite trees and prairie grasses — and also boasts a herd of cattle. An office in southern Germany is set amidst a 22-acre chestnut orchard.

Fidelity’s preference for design themes inspired by nature is somewhat at odds with the current fascination with retro looks that feature bolder colors and graphics, says Whistler. “Industry design trends are getting away from the designs that Fidelity is looking for,” he says.

“Bill is into the sustainability of aesthetics, as opposed to focusing on fashion or trends,” says Bob Hutchison, vice president of product development with Lee’s Carpet. “He’s looking for aesthetics that are functional as well as beautiful. He’s not looking for decoration.”

While Fidelity had been purchasing serviceable, quality carpet, and enjoyed pleasant working relationships with vendors, Whistler and his colleagues struggled to find sources of design that fit the company’s aesthetic approach and were available on an ongoing basis. “Some years, we could find stuff on the market, and other years, it was a desert,” says John Willand, Fidelity’s director of workplace research.

Whistler often found himself reviewing several dozen carpet samples just to find something close to what he was looking for. “It was a lot of time and energy wasted,” he notes. “We wanted to work with partners that could get on the same wavelength and engage their creativity to find new solutions and better approaches to workplace design.”

As a result, the partnerships with the carpet mills centered on design, rather than manufacturing. “It was design-driven,” says Willand. “While we wanted to make sure we didn’t neglect all the other aspects of procuring carpet, such as maintenance, sustainability, durability, and sales and servicing, the impetus was design.”

Quality still was critical. The carpet had to be durable, have reasonable maintenance requirements and hold its appearance. For example, although Fidelity typically replaces carpet after 7 years, the RFQ called for a 15-year warranty on abrasive wear, delamination and color-fastness for carpet tile and a 10-year warranty for broadloom.

Fidelity also wanted fibers that would produce carpets that look good and are easily maintained. The company is convinced that the shape of the fiber affects how well carpet resists soiling and hides dirt as well as how easy it is to clean. With those factors in mind, the company chose Invista Antron 6,6.

Carpet backing is another factor that’s critical to maintainability and longevity. “If you have premium backing, stains don’t spread,” says Konstantine Krekis, an architect and director with Fidelity Real Estate. With a lesser quality backing, spills may spread and delaminate the adhesive.

Sustainability also played a role in the selection process. Fidelity asked each mill to demonstrate steps it had incorporated into its fabrication processes and in the final product. What it found is that the industry as a whole has taken measures to improve environmental performance. “Some are further along on the curve, but all of them are moving in that direction,” says Krekis. “All of them have recycled materials in their products. All of them have achieved significant improvements in fabrication to save energy and water. Those steps make sense on the bottom line.”

From day one, Whistler wanted to work with carpet mills as partners. “Rather than suppliers who would simply fill orders, we wanted people who could work with us to find new solutions to our problems,” he says.

Typically, when companies approach Lee’s Carpets, they’re interested in the immediate product offering or what Hutchison and his team are currently working on. “Fidelity looked at what is possible; what were the limits of coloration technology and the limits of our machines,” says Hutchison. “They go one layer deeper than most people.”

Finally, while Whistler and his team wanted to provide guidelines for Fidelity’s employees, they didn’t want to limit their colleagues with too few options. Each year, Fidelity replaces between 500,000 and several million square feet of carpet. The company needed enough variety that employees anywhere could choose patterns and colors that really worked in their environment.

Once Whistler and his colleagues determined how they wanted to work with carpet providers, they identified certain baseline criteria for manufacturers. As a starting point, the firms had to be financially stable and able to provide both broadloom and carpet tile in quantities Fidelity needed.

That left an initial pool of about a dozen mills. Fidelity sent each a request for proposal. In their responses, the mills discussed the manner in which their design teams worked, product quality, experience in working collaboratively with other organizations, commitment to environmental responsibility and service.

The team narrowed the list to six and set up site visits to learn more about their design processes.

“There was an amazing variety in the approach between companies,” says Whistler. “For some, design was handled by one person who was the ‘diva of design.’ He or she would take a very individual approach to design. Others have a larger staff and research team and take more of a corporate approach. Some others would design on machines and experiment to see what the machines could do.”

Based on their visits, the Fidelity team narrowed its list to three potential partners. “We felt they had the design process, attitude and experience with collaboration that we were looking for,” says Whistler.

Next, Whistler and his colleagues sent the trio of finalists a dozen images that represented Fidelity’s approach to interiors, says Krekis. “They were images typically drawn from nature.” For instance, they included images of leaf patterns, water rippling, flower stems, and pieces of wheat and grain.

The idea wasn’t to prompt the companies to design carpet with literal representations of trees, grass and other elements of nature. Instead, Fidelity wanted the designers to use these shapes as inspiration for their own organic designs. “They gave us wonderful visuals to use in coming up with design elements,” says Oakey.

Interface and Lees were excited to take up the challenge. The two companies created some 300 carpet samples. “Here were the people with a real partner mentality,” Whistler says.

“They looked at this as a wonderful opportunity to work with a corporate client, not as a typical custom carpet design,” says Krekis.

At this point, the partnership is just getting under way, and Fidelity has yet to install any of the newly designed carpet. However, employees have received the samples with enthusiasm and approval. “You’ll look at the carpet, and see something interesting,” says Krekis. “It’s not literally a leaf or ripples in a pond, but something to suggest those images.”

During the collaboration between Fidelity and both Lees and Interface, the two companies each will provide Fidelity with approximately eight patterns designed specifically for Fidelity. All designs will be available in about a dozen colors.

The abstract nature of the designs keeps them interesting, Krekis says. An employee or visitor can look at the carpet several times, and see something new in the design each time.

Even for other organizations with different design requirements, Fidelity’s experience offers useful lessons. Perhaps most importantly, facility executives should recognize that carpet mills are interested in working with them.

At the outset, Willand wondered whether Fidelity was trying to find something that just wasn’t available. He and the others soon learned that wasn’t the case. “The manufacturers would say that they were also working with a particular bank or fast food company,” he says.

What’s more, although Fidelity certainly is a large company when compared to all of corporate American, it’s a mid-sized company when looking at other firms that are working individually with carpet companies, says Willand. The moral: Although a firm has to be a certain size before carpet companies can economically design products just for it, the bar may be lower than expected.

The process is likely to take longer than expected. While working collaboratively can result in better products, it’s also a painstaking approach. To make sure that Fidelity’s far-flung employees use the carpet options that Lees and Interface are designing, Whistler and his colleagues are developing a Web site with information. It will be available through Fidelity’s intranet and will include guidelines on patterns and colors available, dealer networks around the world through which employees can order carpet, and information on proper cleaning and maintenance.

To be sure, the process Fidelity used was a new one, for both the company and the mills. Things moved at a steady, but moderate pace. The time between initial conception and final designs took a little more than a year.

The results are worth it, according to all involved. “We’re finding new ways to achieve what we think are good goals,” says Whistler. “This is pretty exciting.” 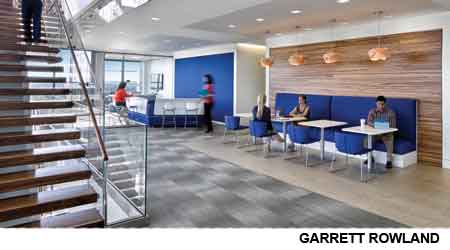 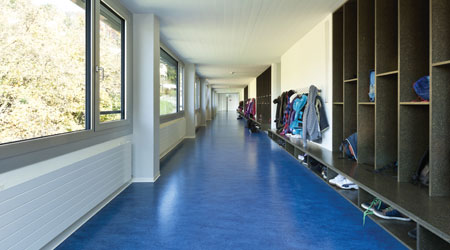