Fireproofing material used in the World Trade Centers might have contained small gaps or flaws that contributed to the spread of fire in the structures, according to federal investigators. Now, investigators say that hundreds of buildings nationwide with similar fireproofing might be far more prone to structural damage from fires than previously believed.

The Building and Fire Research Laboratories at the National Institute of Standards and Technology has been calculating how heat moves through steel building components with small gaps in fire proofing insulation, according to The New York Times. Early results of the studies show that in a fire, the gaps allow heat to enter the steel, where it becomes trapped and weakens the steel.

Numerous buildings constructed since the 1960s have used the same type of fireproofing material to protect their steel. The city's buildings commissioner says the use of spray-on fireproofing was extremely widespread in the city, adding that not enough attention has been paid to concerns such as fireproofing patches, which are applied after parts of the coatings are removed for work on ducts, wiring and sprinklers.

More on the investigation.

Chicago officials continue to debate proposed ordinances that would improve high-rise-buildings safety by mandating sprinklers in such buildings. The proposals are part of the city’s response to a fire at the 35-story Cook County Administration Building on Oct. 17, 2003, which killed six people.

One proposal, from Mayor Richard M. Daley, would require sprinklers in all of the city’s commercial high-rise buildings. One-third of the gross square footage would have to have sprinklers by 2008, two-thirds by 2012; and the rest by 2016.

Also, sprinklers would be required in every new residential or commercial building with an occupied floor more than 35 feet above ground level. Generally, that would mean every new building with four or more stories.

And under the proposal, within five years, the city would require two-way voice communication systems in all high-rise buildings, and the buildings would be required to have annual tests performed on their fire shields in smokeproof towers, which are designed to remove smoke from stairwells. In response to the fire, the Chicago City Council enacted an ordinance that requires:

Efforts to improve compliance with environmental laws among colleges, universities and hospitals the nation’s Northeast seem to be making progress. Officials in regions 1 and 2 of the U.S. Environmental Protection Agency (EPA) reported success in 2003 in increasing compliance./p>

Last year in Region 1 — which includes New York and New Jersey — the EPA signed self-audit agreements with 13 colleges and universities and 13 hospitals and is working with more than a dozen others. The agreements commit the facilities to conduct audits and, in return, receive reduced penalties for violations they disclose. 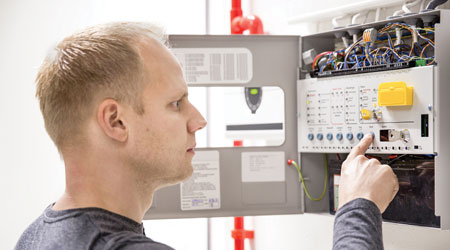