There’s little doubt that facility executives are operating buildings in a world far different from the one that existed before President George W. Bush launched the war on terrorism.

Nowadays, building occupants want assurances that security is being stepped up appropriately when warranted. They want to know building visitors are identified before being granted access. They want to know the building and its management staff are ready to respond to emergencies.

Those expectations, however, extend beyond concerns that a building might be the target of a terror attack. Events like widespread power outages and severe weather storms create unease among occupants who aren’t quite sure their workplaces are up to snuff. Yet for all of the attention and planning that emergencies such as those attract — and warrant — concerns related to fire safety deserve equal attention.

A fire in a Chicago high-rise government building that left six dead last year made that painfully clear. Officials in that city are reexamining codes governing the installation of automatic sprinkler systems in high-rises and other structures. Although every jurisdiction sets its own fire safety code, Chicago will influence what other cities require within fire safety regulations.

“It’s true that every time there is a tragedy in some city, it prompts code changes,” says Ron Burton, vice president of advocacy for Building Owners and Managers Association (BOMA) International.

The question for facility executives, however, is how to determine whether a high-rise building should have sprinklers, even if not required by code. The fire in Chicago put the spotlight on older high-rise office buildings allowed to operate without sprinklers, even though newly constructed buildings are required to have them. Facility executives in low-rise and other types of commercial buildings that are allowed to operate without sprinklers face a similar quandary.

The 35-story Cook County Administration Building is being made an example partly because it raises issues facing facility executives at other buildings in the city. The structure was built before 1975, the year the city’s codes required automatic sprinkler systems be installed in all high-rises. One estimate puts the number of high-rises without sprinklers in Chicago at 1,000.

Moreover, the Cook County building had undergone a number of improvements that, if they had been deemed substantial enough by local code officials, would have required the building to undergo a sprinkler retrofit.

Many jurisdictions, regardless of whether they adopt either the National Fire Protection Association (NFPA) code or the International Building Code fire protection code, require older facilities to meet current codes when more than 50 percent of the building has been renovated. The difficulty is in defining “50 percent.”

Burton says some facility executives view the requirement as meaning half of fair market value. Others interpret it as half of assessed value. Still others look at the amount of physical space that is being renovated and whether the renovation occurs in a single or over multiple projects.

“It’s always been difficult to assess what 50 percent means,” says Jeff Harper, vice president and engineering manager with the engineering firm RJA. “There could be some questions over what period of time the renovations occur.”

Like other cities, Chicago’s fire code requirements were developed based on the city’s history. It’s common for city officials to adopt one of the major codes promulgated by NFPA or the International Code Council and then amend it to meet local concerns and circumstances.

In California, for example, Burton says officials fortify seismic requirements based on soil conditions. In the southeast, wind uplift requirements are often changed because of hurricane threats.

In Chicago, Harper says, special attention had always been paid to fire requirements because of the city’s history with the Chicago fire in 1871. Commercial high-rises constructed after 1975, for example, were either required to be fitted with automatic sprinkler systems or be built in such a way that each floor of the building was compartmentalized from others.

Since the Cook County building fire in October, city officials have been wrestling with whether to require automatic sprinklers in all commercial high-rise buildings regardless of when they were constructed. Much of the debate is centered on whether sprinklers will be required in high-rise residential buildings. Nearly all city officials are in agreement that codes should require commercial, government and institutional buildings to have sprinklers. Few question the effectiveness of sprinklers.

NFPA figures indicate that the chances of dying in a fire and the cost associated with property loss per fire are reduced significantly when sprinklers are installed. Based on 10 years of data, an NFPA analysis showed that the number of deaths per 1,000 fires was reduced by 74 percent for stores and office buildings. The same study concluded that the average property loss was reduced by 56 percent in buildings with sprinklers.

In addition, NFPA has no record of a fire killing more than two people in a completely sprinklered building when the system was operating properly. Deaths to firefighters or employees killed in an explosion are excluded from those figures.

What’s holding up the decision in Chicago, then, is what often keeps facility executives from installing sprinklers when not required by code: cost.

Cost estimates for installing sprinklers in existing buildings range from $1.50 to $5 per square foot. That means the owner of a 500,000-square-foot building could pay upwards of $2 million to retrofit the facility with sprinklers.

The final cost depends on a number of factors. In addition to sprinkler heads, costs include how much interior work is required to run pipes behind ceilings, whether aesthetics require the pipes to be concealed and the number and size of pumps required to increase water pressure in the building’s standpipe.

When deciding whether to install sprinkler systems, regardless of code requirements, facility executives might consider a risk-management and cost-benefit approach to determine whether the risk justifies the cost. That’s what Jim Streit and his team did at Los Alamos National Laboratory, which encompasses 43 square miles and is comprised of 2,200 structures, including some nuclear facilities.

Streit, fire marshal with the laboratory’s fire protection group, says all new buildings are fitted with automatic sprinkler systems. For existing buildings, the lab determines whether sprinklers are warranted in any particular building by estimating the amount of loss a fire would create and comparing it to the cost of installing sprinklers. The lab also considers the loss a fire could cause in a sprinkled building as well as cleanup costs should sprinklers be activated.

“We’ve put systems in all those building where it makes economic sense,” he says.

Also included in the cost-benefit analysis of whether to install sprinklers is the effect that the installation of sprinklers has on other aspects of a building’s construction and operation, he says.

For example, NFPA 101, the association’s Life Safety Code, affords greater allowances to dead-end corridors, common paths of travel and total travel distances to fire exits for sprinkled buildings. That might allow greater flexibility in the design of new buildings or in the reconfiguration of space in existing buildings, Streit says. The same code also allows for simpler fire separation requirements for higher-hazard rooms, such as maintenance closets, stock rooms and mechanical rooms, when a building has sprinklers.

“Whether or not required by code, sprinklers are by far the best fire suppression mechanism for most buildings,” says Jane Lataille, who works with Streit in the laboratory’s fire protection group. “They protect building contents, reduce exposure to other buildings, foster fast recovery and limit downtime. The importance of those factors can outweigh simple code considerations.”

Another important factor that is easy for facility executive to overlook when deciding whether to install automatic sprinklers is the required maintenance and testing for such systems. Requirements differ for wet sprinkler systems — those that are charged with water to the sprinkler head at all times — and dry sprinkler systems, which are flooded only if the system is activated.

Proper testing procedures are outlined in codes, such as NFPA 25. What’s important to know, however, is that improper maintenance and testing could mean a system fails to operate when needed, says Harper of RJA.

Facility executives considering sprinklers should include all factors that would influence the cost-benefit analysis. Some building owners pay reduced insurance premiums, for example, because of fire sprinklers.

What gets more difficult to determine, says Burton of BOMA International, is the influence sprinklers have on a property’s overall value or ability to attract and retain tenants. Much like tenant concern for security fades as the threat of terrorist attacks subsides, so do tenant concerns for sprinklers as time between fatal high-rise fires lapses.

BOMA International has conducted surveys in attempts to gauge the influence that certain building systems and amenities have on tenant retention and satisfaction, Burton says. Tenants don’t necessarily see an advantage to sprinklers when weighed against the location of a building and the cost of a lease.

“Improvements to buildings tend to get trounced by price,” he says.

Facility executives who decide not to install sprinklers might consider other fire safety protection measures and, at a minimum, be sure existing measures function properly. Fire exit doors to stairwells, for example, should unlock when a fire alarm is tripped. Other precautions include being sure that emergency exit paths are clear and properly marked.

Although not necessarily any easier to design than sprinkler systems when it comes to existing buildings, stairwell pressurization systems are another measure worth consideration.

Air in a stairwell has a certain weight, the force of which is applied against doors that open into the stairs. As pressure increases, so does the force on doors.

“It’s a very fine balance between creating enough pressure to clear the smoke and still allow the doors to open easily,” Harper says. 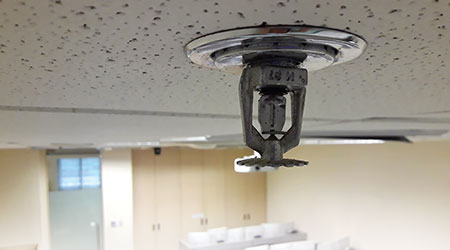