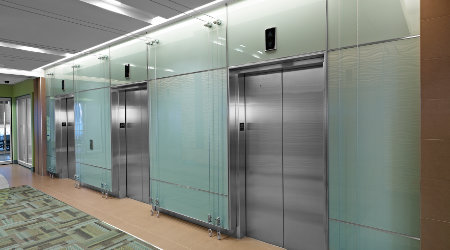 Elevators and Fire Sprinklers: Fire Safety Moves On Up

However, the Illinois Department of Public Health (IDPH), which acts as an agent for the federal government and inspects facilities that offer Centers for Medicare and Medicaid Services (CMS) reimbursable payments, has cited existing healthcare occupied buildings for not having automatic fire sprinklers throughout facilities as required by the Life Safety Code, NFPA 101 2012. Due to IDPH/CMS citations associated with the lack of fire suppression in the elevator machine rooms and hoistways, facility owners in Chicago are confronted with the need to implement fire sprinkler systems in existing elevator machine rooms and hoistways while satisfying the City’s concerns of providing safety to their first responders.

A recent project endeavored to install new fire sprinklers in existing elevator machine rooms and corresponding hoistways in three healthcare facilities. The installation was in response to an IDPH/CMS site inspection citation administered to the three facilities.

Prior to the design of the fire sprinkler system, representatives from the design team and the facilities team convened with representatives from the City of Chicago Fire Prevention Bureau and the Building Department. The intent was to review the State’s fire sprinkler requirements and how it conflicted with the City’s code requirements. As part of this review, the possible financial impacts of lost CMS reimbursable payments to the facility if the fire sprinklers were not installed as required by the State, were also acknowledged.

Upon review of the IDPH/CMS fire sprinkler requirements and subsequent financial impacts, the Building Department and the Fire Prevention Bureau allowed for an Alternative Code Approval Request (ACAR) to be submitted to the City on behalf of the facility. The ACAR is a process that allows state-licensed design professionals to request project-specific modifications of code requirements in the City of Chicago. This ACAR was submitted to address revisions to the City code to appease the State’s code requirement. In this case, the request was to allow the installation of fire sprinklers in the elevator hoistways and elevator machine rooms as required by NFPA 101, 2012.

Predicated upon the ACAR submission, the design of this new system was to include a number of fire alarm devices and measures as requested by the Fire Prevention Bureau to protect first responders while in the elevator cabs during a fire event. These requested measures included the use of an air sampling smoke detection system, which would activate elevator recall and provide a warning in the cab. The measures also included adding a “rate compensated” heat detector to the top of the hoistway. Lastly, as part of the ACAR, a double interlock preaction sprinkler system was added to the elevator hoistways and elevator machine rooms as an added safeguard to the elevator motors and controllers to coordinate the timing of the power loss (shunt) to the elevators.

In addition to the initial meeting with the Fire Prevention Bureau and the Building Department, the design team, including a fire protection designer, reviewed the fire alarm sequence of operations with the Fire Prevention Bureau. This review was important because it described how and in what sequence all of the fire alarm devices associated with the elevator hoistways and machine rooms would operate during a fire event. Assurances were made to the Bureau that the elevators would recall and any first responders using the elevators during a fire would be warned before the power to the elevators was shunt. The Bureau wanted a robust smoke detection system and wanted the proper warning to be given to first responders. This warning is typically communicated by a flashing light in the shape of a fireman’s hat located in each elevator cab. In this case, the Bureau wanted the light to flash upon the detection of smoke.

To address these assurances, the fire suppression and fire alarm designers implemented an air sampling smoke detection system in their design. This system provides multi-level smoke detection and is much more sensitive and reliable than typical smoke detectors in large spaces with airflow concerns. This level of detection was important in the project because the elevator shafts rose more than 20 stories. Due to the hoist way heights and the number of moving elevator cabs in each hoist way, there were concerns of varying air flows which could affect the smoke detection of typical ionization smoke detectors.

The smoke detection system uses aspirating pipes to sample and detect smoke through the air. In this project, the aspirating pipes were installed in the elevator machine rooms below the floor structure above. These pipes were then routed along the walls through holes in the slab below to the top of the elevator hoistways. These factors as well as the reliability and multi-level detection of the system were well suited for this project.

The coordination between the electrical design and the fire protection and fire alarm designs was extensively scrutinized during the design phase to facilitate the power loss to the elevators.

It's important to note that the time allotment between when the firemen’s hat starts to flash and when the power is shunt was closely reviewed. The timing was based on the smoke detection program settings of the air sampling system, the set temperature of the rate compensating heat detectors, and the temperature rating of the sprinkler heads.

This project was a highly technical endeavor that involved a number of stakeholders and steps. The design team first had to address the disparities of the state and city codes, then had to request and obtain code modifications, and then had to provide a design to comply with the state and city’s requirements and concerns. Finally, the design had to be implemented. The project heavily relied on the fire protection and the fire alarm designer working in coordination with the facility. This coordination extended from the design phase through the construction phase to include all of the applicable trades such as the electrician, the mechanical/fire protection, and the fire alarm sub. With the entire team’s effort and the facility’s guidance and management, the project was inevitably inspected by the City of Chicago’s elevator inspectors and approved.