Organizations spend a lot of money protecting data centers from the risk of downtime. And those investments — whether in uninterruptible power supply (UPS) systems, powerful air conditioning systems or emergency generators — are justified by the greater costs the organization would bear if the data center were to go down. But the risk of fire also deserves careful attention from facility managers.

Should a fire occur, it is most important, after securing the safety of personnel, to ensure that equipment suffers a minimum of damage. In the past, of course, data centers could use Halon to put out an electrical fire. But, once it became known that Halon was destroying the ozone layer, it was phased out. Those with existing fire-suppression systems that use Halon can still buy tanks of the gas, but it is illegal to install new systems that use it.

Halon alternatives generally fall into two categories: clean agent systems, many of which use halocarbons, and inert gases. Clean agent systems extinguish fires by removing heat from them. Inert gases essentially suffocate the fire by depriving it of oxygen.

Both clean agent and inert gas systems can be "excellent, reliable systems," if they are properly designed and commissioned, says Scott Golly, senior fire protection engineer at Hughes Associates and member of the NFPA 72 SIG-IDS technical committee. If everything works properly, including the alarm system, electronic equipment won't be destroyed by fire and water damage will be avoided, although there may be smoke damage, says Golly.

"If [the fire alarm system] is not properly commissioned and tested, one mistake can result in a [malfunction]," he says, since the systems rely heavily on correct programming.

Facility managers should keep several factors in mind when considering Halon alternatives. One is space. Inert gas systems use a higher concentration of gas to extinguish a fire than halocarbon systems, so they require more storage space, says Golly.

One consideration with halocarbons is potential environmental impact, particularly with regard to ozone depletion. In addition, once the agent is discharged, "the atmosphere can be quite corrosive," which can damage equipment, Golly says. Because different halocarbons have different environmental properties, it's up to facility managers to investigate their options thoroughly.

Enclosure is another factor to consider in ensuring maximum functionality. The room has to stay tight to maintain the required concentration of the fire suppressant, whether it is an inert gas or a clean agent. "If staff keep putting holes in the wall, enclosures can be compromised if the holes are not sealed back up," Golly says.

But using water in a data center brings its own set of problems.

In a conventional sprinkler system, water is already in the pipes where the sprinkler heads are, says Ralph Transue, senior consultant for the RJA Group. If one sprinkler head becomes hot enough, the water pours out.

"The water can cause catastrophic damage to equipment," Golly says. There is a potential for electrocution, he says, "but more likely circuitry will fail and breakers will protect occupants." Moreover, if there is a fire in an enclosure that houses computers, the water may not get into the enclosure, which could mean the fire itself will still cause damage.

Another problem caused by a water discharge is mud puddles full of the by-products of combustion, which will be pushed through the facility. "[The muddy water] can spread quickly, extending both the smoke and water damage," Golly says.

"Nothing is behind the sprinkler head except for air," Transue says. To activate a pre-action sprinkler system, "some form of fire detection in the room must cause the valve to open," he says. Even so, it still takes heat at the head to release water from an individual sprinkler.

Facilities that choose to rely only on water-suppression may opt to install a very early warning smoke detection and alarm (VESDA) system, which will alert staff to respond to smoke or a small fire. But OSHA rules and insurance considerations factor into any decision to have employees respond to emergencies, says Transue. "Most companies have security staff or a designated fire brigade that would respond in these instances, and you could hire a fire fighter," Transue says, but this is a gray area, and it might not be crystal clear what employees can and cannot do.

Deciding Which Way to Go

The idea with a sprinkler system in a data center, whether it is conventional or a pre-action system, is that the fire will be put out in some other way before it actually becomes necessary to release water and damage equipment.

"People will often have a double interact system," says McCarthy. A double interact system uses a clean agent to put out a fire long before a smoke-head is set off. A pre-action system may also require the activation of two smoke detectors in two different zones before a deluge valve opens to fill the pipes. It then takes temperatures of 125 or 130 degrees for the sprinkler to discharge. The clean agent or inert gas fire suppression is designed to put out the fire before the sprinkler head begins dropping water.

These systems are more common in corporate and banking data centers, due to concerns about privacy and the importance of the information. By contrast, less critical facilities might be willing to rely on a pre-action system, which costs less than a clean agent or inert gas system. Companies that have data mirrored in multiple locations might be willing to accept less rigorous fire protection in individual facilities.

In deciding which way to go, facility managers need to begin with evaluating what would constitute an acceptable loss. "Can you afford to have all those computers taken off line for several weeks?" Golly says. "If you cannot, then you cannot rely solely on sprinklers." 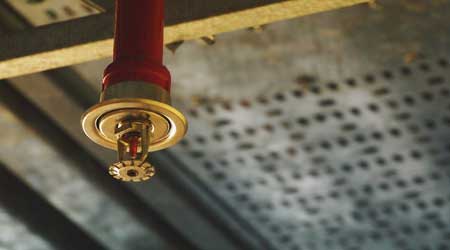