By Lacey Muszynski, Assistant Editor
Fire Safety/Protection
OTHER PARTS OF THIS ARTICLEPt. 1: Facility Professionals Advised to Have Fire Emergency Plan in PlacePt. 2: This Page

The best fire emergency plan in the world won't do much good unless people know about it. Both building occupants and facility staff should have copies of the plan, learn the plan and practice the plan. Conducting fire drills will help occupants familiarize themselves with the best egress routes to take and will serve to alert the facility manager to problems or bottlenecks in timely egress. Additionally, training facilities staff on what to do in case of fire is essential. The fire emergency plan should address who is to contact the fire department, who operates the mass notification systems and what to do (and expect) when the fire department arrives. "People will depend on your staff when there is a fire in your facility," says Jelenewicz. "You can't expect everyone to leave or do the right things."

Occupant training is conducted to counteract one thing: human nature. "Human nature is the biggest factor having to do with fire," says James Carrigan, supervising engineer for fire/life safety at Syska Hennessey. "The occupants need to be trained on what to do because human nature doesn't always compel people to do the correct thing."

Other experts agree. "The good news is that people think humans panic when there's a fire, but that rarely happens," says Jelenewicz. The bad news is that fire alarms rarely trigger evacuation, he says. "There's two main reasons for that. People may not recognize the signal as a fire alarm because they're unfamiliar with the building or can't hear it, or they may not have confidence in the system." That often happens when there are constantly false alarms, so when a fire does occur, people are complacent and don't want to be inconvenienced by another false alarm evacuation.

Some other factors may play a role in occupants not doing the correct things if there is a fire, says Jelenewicz. Women tend to evacuate a building more often than men, who tend to try and find the source of the fire and fight it, whether they are trained or not. And when people hear a fire alarm in their own home, they take charge and find out what happened. So when people are in a facility that's not their own, they expect someone else to take charge and give them more information in a time of fire.

A real danger occurs when occupants are expecting more information, but nothing comes, says Coté. A facility may only have horns or strobes, but no voice communication capabilities. If occupants don't know that, they may be waiting for more information that will never come. Voice communication systems have become increasingly popular, especially in high-rises where a fire on a floor may only require evacuation of the floors directly above or below it. "People need information when there's a fire: what the problem is, what they should do, and how to do it," says Jelenewicz. "It's not just a buzzer on the wall."

For guidelines and specifics on how testing and maintenance should be performed, facility managers need look no further than NFPA. Not only are codes and standards for installation of fire systems provided by NFPA, but testing and maintenance are addressed as well, says Coté. For example, sprinkler systems are installed to "NFPA 13: Standard for the Installation of Sprinkler Systems," and tested and maintained in accordance with "NFPA 25: Standard for the Inspection, Testing, and Maintenance of Water-Based Fire Protection Systems."

Besides the full text of the standards, NFPA also provides forms and documents to show that testing has been completed. Facility managers should always document all testing, maintenance and inspection of fire safety systems. "If something happens, you want to prove that you did all the testing," says Jelenewicz. "If I'm a facility manager and someone gets injured due to a fire in my facility, I wouldn't want to be sitting in court someday."

In addition to testing active fire safety systems, such as sprinklers and smoke detectors, it's important to remember to inspect passive fire systems as well. That includes smoke barriers, fire doors and other structural fire protection. They are just as important in preventing the spread of a fire as active systems but can often be overlooked after initial installation.

And if all of this seems difficult to keep a comfortable handle on for busy facility managers, experts recommend hiring a fire and life safety professional. "Sometimes I think that facility managers don't want to have to become experts on the fire systems and concepts," says Coté. "They might find it easier to bring in a consultant or engineer to help write and implement the initial fire safety plan."

But whatever a facility manager decides to do, it's important to always keep fire and life safety at the forefront of his or her duties. "There's no ROI and it's not a money maker," says Carrigan. "But it does provide two things that are immeasurable: protection of the building and protection of life."

Facility Professionals Advised to Have Fire Emergency Plan in Place 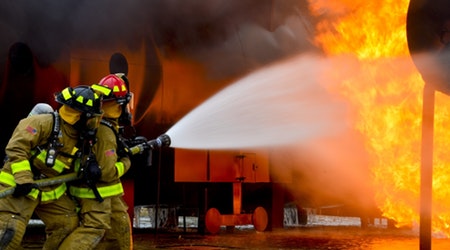