By Naomi Millán, Associate Editor   Facilities Management
OTHER PARTS OF THIS ARTICLEPt. 1: Hospital Facility Management in a War ZonePt. 2: Hospital Construction and Maintenance in BaghdadPt. 3: This Page

Perhaps the greatest challenge to managing Ibn Sina was the external political situation. The hospital is located in Baghdad's International Zone, where the employees risked their lives simply coming to work.

"Day to day, it was like any health care facility I've ever managed," Tanner says, "except we were in a war zone."

The hospital's facility management team included 153 Iraqis, a good number of whom had degrees in fields like engineering and biochemistry — degreed professionals who simply needed a job. And they needed it so badly, they risked being killed just to get to work.

The five facility team members not from Iraq lived in a protected compound across the street from the hospital. To get to work, they had to present their badges to get out of their compound, again to cross the street and again to enter the hospital. Any Iraqi went through the same process, except instead of just presenting an ID card, they also underwent full body searches at every checkpoint.

Not only was this humiliating, but it was hugely time consuming. Tanner says much of his employees' day was spent clearing security checkpoints, which he describes as an absolute necessity despite their inconvenience. Cell phones, computers and radios were not allowed to be carried or used by Iraqi employees because they could be used to set off bombs or give away GPS positions for mortar and rocket attacks. That meant that most communication among team members had to happen face to face.

If day-to-day security was tight, a security problem at one of the gates meant even stricter measures. The hospital could go on immediate lockdown, meaning no one could get in or out of the compound or hospital.

If the checkpoints within the hospital grounds were disruptive, the checkpoints in the Red Zone could be flat-out dangerous. After he started, McCubbin heard accounts of a contractor who had been found with a badge for the hospital hidden in his shoe. He was kidnapped, tortured to the point of near death and then ransomed back to his family. He died before he could receive appropriate medical attention.

"You don't want anyone to know you work for the Americans," McCubbin says.

And then, of course, there was always the risk that a rocket would fall out of the sky. "Incoming, incoming." When the Big Voice, as the loudspeaker alert system was known, said those words, hospital workers had six seconds to get their armor on and seek cover. No one knew what it was or where it was, but all work would stop and everyone would wait. "It does create a certain level of tension and worried anticipation," Tanner says. On bad days, the Big Voice would boom two or three times.

Though the hospital itself was never hit directly while Tanner was there, nearby explosions intended for other targets shattered various glass doors and windows, among other light damage.

Though he says the hospital never made it to the point where it would pass muster in a Joint Commission survey, Tanner says he's proud of what he and his team achieved.

"We've really gone over the hospital from top to bottom and turned it into, for Iraq, a top-notch state-of-the-art hospital," Tanner says. "It doesn't compare to what we're used to in the States, but under these conditions, it couldn't."

In May 2009, the U.S. Army announced that Ibn Sina Hospital would be handed back to the government of Iraq. In addition to managing the hospital, Tanner's team spent the next four months renovating an existing medical facility 12 kilometers away at Camp Victory so that the 10th Combat Support Hospital unit could transition over without any lapse in care for the soldiers.

Thanks in large part to the work of the Combat Support Hospital units, the survival rate for injured soldiers in Iraq is reported to be 90 percent, the highest ever in U.S. history. Working closely with the Army medical units, Tanner saw first-hand the importance of the work done by the CSH units, as they're known.

"Just watching these CSH personnel take care of the wounded was inspirational," Tanner says. "It's something that I don't think folks back home realize is going on. You take it for granted that when someone is wounded, they'll be taken care of. But you just can't imagine the honor and respect they show them. And the level of care, and the ends to which they go to keep them alive."

Hospital Construction and Maintenance in Baghdad 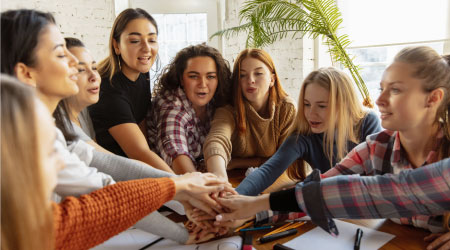 Women Have a Place in Facilities Management