Controls, Sustainability Are The Focus at Shedd Aquarium

By Greg Zimmerman   Facilities Management
OTHER PARTS OF THIS ARTICLEPt. 1: This Page

The Amazon Rising exhibit at Chicago’s famed John G. Shedd Aquarium includes a wide variety of exotic creatures, including an anaconda, piranhas, rays and several large insects. To match the high humidity of these animals’ natural habitat, Shedd worked with an outside contractor to help set up a system that sends a mist spray into the air at regular intervals. To get the system just right took a bit of trial and error. “We made it rain in there a few times,” says Bob Wengel, vice president of facilities. “Nobody really knew what was going to happen when you mist water around an exhibit.”

Wengel and his facilities team worked with their controls vendor to develop a system to regulate the misting and include alarms if the humidity gets too high. Now, with careful monitoring and periodic recommissioning, the system operates swimmingly.

The misters in the Amazon Rising exhibit is just one example of several non-traditional ways Wengel and his team use controls at the aquarium. Wengel also worked with his vendors, engineers and his staff to develop controls for Shedd’s life support systems for some of the enormous animal habitats.

Controls also monitor the temperature and flow of water through the habitats. The system is set up with various stages of alarming and/or system shutdown if the specifications get too far out of tolearance — a rather important function, given that one or two degrees either way or a slight uptick in ozone or other chemicals could be fatal for the animals.

Controls also are a key part of the many environmental initiatives Wengel and his team are working on at Shedd – especially in terms of measuring and benchmarking energy and water. Obviously, an aquarium is a tad different in terms of how it uses energy and water than a typical office building, so, along with six other similar facilities in the U.S., Shedd participated in a benchmarking study on energy and gas use to try to set a baseline for aquariums. Wengel says the study was undertaken, in part, to try to answer the question, “What is a LEED certified aquarium?” The Shedd Aquarium came in at 15 percent below the baseline of the other facilities, which Wengel says was surprising, but welcome news. Still, not having a LEED for Aquariums rating system hasn’t stopped Wengel – and a new office addition at Shedd recently earned a Certified rating.

Part of Wengel’s focus on sustainability at Shedd is figuring out how he can post photovoltaic panels on just about every square inch of roof space — including some roofs that aren’t built yet. Wengel says he recently went through an exercise of creating a five-year facility plan, and as part of that plan, he hopes to add some canopies and shelters near the entrance of the building, both to protect visitors from the elements as they enter the aquarium, and also to provide more roof for photovoltaic panels. The aquarium opened in 1930, and the front façade is now labeled as an historical landmark, making it slightly more difficult to get the permissions to install PVs on certain sections of roof.

Overall, Wengel says what keeps him up at night is the question of if Shedd is doing enough to save energy and be as efficient as possible. He believes there is always room for improvement and constantly thinks about what more he and his team can do. Another one of his main goals for sustainability is to make sure that his team has the right tools in place to streamline facility management and to do their jobs effectively — from systems for gathering data to controls and automation. Shedd works in an integrated planning structure and that is exactly how the sustainability plan was created. This holistic planning allows many of Wengel’s facitilies staff members to be  “spiritual leaders” of the many aspects in the organization’s sustainability goals. And with the proper tools in place, it won’t be raining in the Amazon Rising exhibit any time soon. 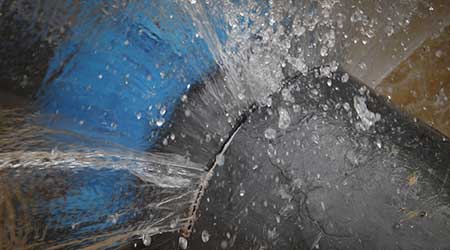