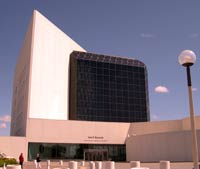 The library installed an electric heating plant during initial construction in 1967, but the rising cost of electricity has made heating the building increasingly expensive.

“When the library decided to overhaul the heating system in the fall of 2003, there were three major stipulations,” says Justin Harder of Frazer Engineering, the project’s primary contractor. “We wanted to utilize a gas-fired plant to take advantage of the lower price of natural gas, (and we wanted to) install energy efficient condensing equipment. And because the mechanical room was located on the building’s top floor, small, light units were a necessity.”

By turning more of the boilers’ fuel into usable heat, the units’ ability to operate safely in condensing mode can increase the system’s efficiency by as much as 11-12 percent. When loop temperatures drop below 130 degrees, water vapor in the combustion gases is forced into a liquid state, releasing latent energy. The boilers’ stainless-steel heat exchangers are constructed to withstand the corrosive impact of condensing operations and thermal shock, which typically is associated with cool-return-water temperatures.

“Because of the Benchmark’s ability to operate safely in condensing mode, there was no need to install dedicated pumping equipment, auxiliary heat exchangers and mixing valves to protect the boilers,” Harder says. “This simplified construction will reduce operating and maintenance expenses for years to come.”

With 20 to 1 turndown, each unit can run as little as 100,000 Btu/hour before cycling off, and it will increase output in 1 percent increments without unnecessary overshoot. This results in less overall gas consumption by the plant. Running at part load with return water temperatures below 130 degrees, the units can exceed 95 percent thermal efficiency. The boiler management system (BMS) also consistently rotates the lead boiler in the plant, so each unit receives about the same amount of work over the course of a season.

“The modulating ability of the Benchmark boilers, in coordination with Aerco’s BMS, precisely matches the plant’s output to the facility’s changing demand,” Harder says. “The Aerco BMS responds to the indoor/outdoor reset schedule driven by Siemen’s building automation software and maximizes plant performance as a whole, modulating the output of the three boilers so that they run as one complete system.” 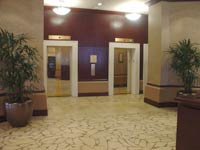 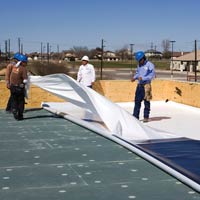 Wilson County, N.C., has reduced its utility costs by $107,000 annually since completing a $900,000 facility upgrade to improve operations, comfort and efficiency at 10 county buildings. 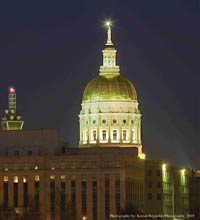