Gundersen Health System makes sure designers deliver projects that perform efficiency-wise as well as they were designed to.

These days, the goal is to build on a decade of efficiency and renewables success. “You can’t just maintain to succeed,” says Eber. “You have to improve or you can’t succeed.”

And so what’s old is new again: “We’ve moved from conservation into renewables and now we’re back to efficiency,” says Zarecki.

The team meets monthly to examine anomalies and look for opportunities to reduce energy waste. “Corey is the kind of guy who’ll be walking around in a building with his mind focused on how much better anything could be done,” says Eber. “He could be walking around town hall and it’d be the same. That’s just his mentality: Where is the waste? What are the options for improving?”

One strategy that’ll have a dramatic effect on Gundersen’s long-term efficiency goals is ensuring new construction lives up to efficiency standards in operations — no small feat for healthcare facilities. “What we’ve learned is you can’t just say ‘We want this to be an energy efficient building,’” says Eber. Instead, Zarecki and Eber have learned to give the designers an aggressive energy target and stay on them to hit it.

For hospital buildings in the upper Midwest, the average for energy performance is about 250 kBtu/sqft/year. Gundersen tells its designers to hit a target of 115. They don’t tell designers how to hit that target, specifically. But they make sure designers understand why such an aggressive goal is important. 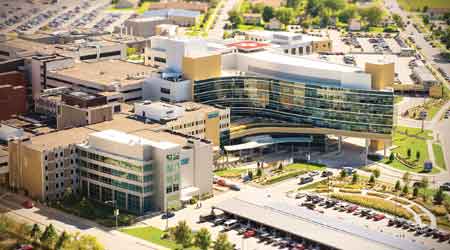 (Gundersen Health System is the first health system in the United States to be fully energy independent. The system’s headquarters campus in La Crosse, Wis., contributes to that goal with a geothermal system and a biomass boiler with a back pressure steam turbine.)

It’s very easy in the design phase to just hit backspace and enter new numbers in the energy model, says Zarecki. That results in a poor model. “You absolutely have to have a good model. It allows you to make decisions about tradeoffs in the design phase when it is cheap and easy instead of later after the building’s built and you are locked into much of a building’s performance.”

Zarecki mentions the oft-cited atrium example: Is a two-story atrium worth the energy penalty? Or would a story-and-a-half with a skylight be better? The model lets you evaluate those decisions. Zarecki quotes a piece of good advice he’d received earlier in his career: “All models are wrong, but some models are useful.”

Even with perfect assumptions in a model, it’ll still take a few months to a year to tune a building after it opens and optimize its systems to perform most efficiently. “You have to commission a building to confirm what we’re predicting in the model is accurate and close to what the model is saying,” says Zarecki. “Buildings don’t just work when you turn the key. Just because a facility is new doesn’t mean there’s not room for improvement.”

That constant improvement to drive out waste has been the hallmark of Zarecki’s career at Gundersen. But energy efficiency is something he’s become deeply passionate about. It shows. “Why am I still doing this 11 years later?” he says. “I came here to help reduce the cost of healthcare. But now I get to work on something every day that marries cost, health, environment, and economy. You don’t have to be an energy engineer, but you have to be someone who can get things done.” No question, Zarecki is that.