Part 1 of a 3-part article on solar-energy technologies

By Laurie A. Gilmer, P.E.
Energy Efficiency
OTHER PARTS OF THIS ARTICLEPt. 1: This PagePt. 2: Solar Market Growing, but Challenges do ExistPt. 3: Developments on Solar-Technology Front for Maintenance Managers

The use of solar energy in institutional and commercial facilities has seen many advances over the past few decades. In fact, our use of solar technologies in facilities dates back as early as the 3rd Century B.C., when Greeks and Romans used burning mirrors to light torches.

It took several hundred years for discoveries and advances to be made before we finally saw the first silicon photovoltaic (PV) cell capable of powering everyday electronics. That was in 1954, and it was about 6 percent efficient.

Fast forward to the energy crisis of the mid-1970s, when the cost of fossil fuels soared, kindling an interest in solar energy technologies. At that time, the conversation was about energy, both using less and switching to alternate energy sources. The conservation conversation has continued more strongly in the past decade, but the content has changed. It is no longer about energy. Now, it is about emissions.

Energy conservation and demand management are still very important from a facilities cost perspective. Energy is still considered the largest controllable cost in facilities. But emissions reduction is the real goal. In the world of facility management, requirements have been defined for both federal and commercial facilities.

The Energy Independence and Security Act required federal facilities to cut energy use for new and existing facilities. It also defined the Zero Net Energy Commercial Buildings Initiative, which has a goal to “develop and disseminate technologies, practices, and policies for the development and establishment of zero net energy commercial buildings.” The effort aims to achieve net zero energy in newly constructed buildings by 2030, in one-half of existing buildings by 2040, and in all existing buildings by 2050.

With the focus on emissions, this means buildings not only must become more energy efficient. They also need to employ renewable and clean-energy technologies to reduce the overall emissions footprint.

Solar energy accounts for about 0.4 percent of the total utility-produced energy used in the United States, according to the Institute for Energy Research. That figure may seem small when compared with other clean and renewable sources that account for an additional 17.9 percent. It is important to note that the 0.4 percent quantity does not account for solar energy located directly on commercial and residential sites. If it did, the number would still be relatively small. 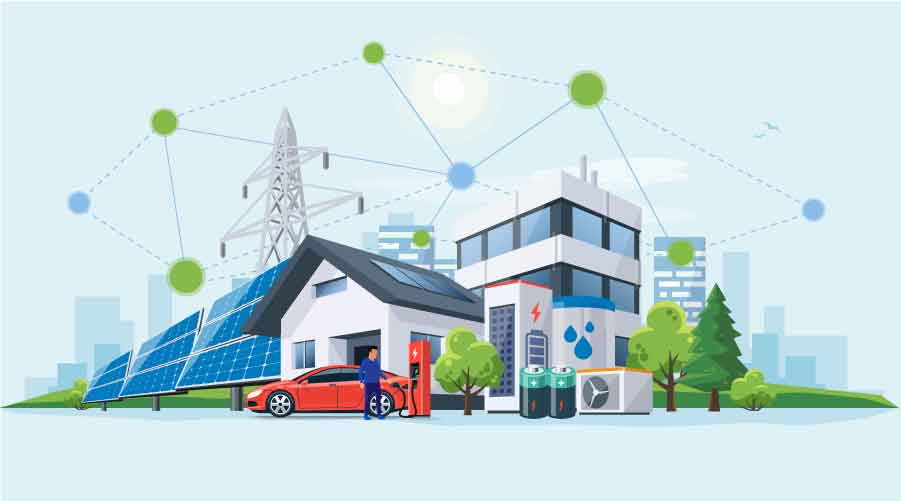 How Hospitals Use Energy