2. Reduce stack effect. Stack effect is the vertical upward motion of air in a heated building in winter. It is the same buoyancy effect as the flow of hot combustion gases up a chimney stack.

Stack effect causes cold outdoor air to enter a building any way it can, on the lower levels, especially through larger openings such as entry doors, loading docks, and mechanical rooms. The air rises any way it can through vertical paths in the buildings: stairwells, elevator shafts, mechanical shafts, and holes from floor to floor such as pipe penetrations. And, finally, air leaves the building on the upper floors, out vented attics, elevator vents, and other openings. Stack effect airflow also happens, to a lesser degree, in and out windows and balcony doors up the full length of a building: into the building on lower floors, and out of the building on upper floors. As soon as the cold outdoor air enters the building and reaches a heated space, it adds to the heating load of the building. Reducing stack effect reduces the load on the heating system, in much the same way that adding insulation does.

Reducing infiltration driven by stack effect is done by reducing airflow paths for stack effect airflow. The starting point is with vertical paths: holes around pipe penetrations up through buildings, holes into chases for piping and wiring and ductwork. (Hint: look below kitchen and bathroom sinks, also around exhaust and supply ventilation grilles.) Unused chases and chimneys are capped, both at the top and at the bottom. But it’s also important to look at horizontal airflow paths where air moves toward the vertical paths: air leakage from a building into a mechanical room (remember, the chimney is a major vertical path for stack effect); stairwell doors, which may need to be weather-stripped; and more. Finally, circle back to slowing the infiltration itself: adding air locks, installing tighter windows and doors, and the like.

3. Replace boiler or furnace systems with ductless heat pumps. You may ask, “How is replacing boilers or furnaces with heat pumps not like a one-for-one replacement?” This third example is a little tricky. Recall that the loads on heating and cooling systems are not only heat losses and gains from the building walls and roof, but there are also distribution losses. Boiler systems lose heat from piping in the mechanical rooms, and from piping running through unheated spaces. Furnace systems lose heat from ductwork, and also when air leaks out of ductwork. These distribution losses can be large, typically representing over 10 percent of a system’s energy use, and sometimes as much as 20 to 30 percent. By using ductless heat pumps, losses in mechanical rooms and unheated spaces are virtually eliminated. Ductless heat pumps offer other benefits too. Individual temperature control of each space means that imbalance losses due to overheating or overcooling are reduced. When used as a replacement for steam-heating systems, other losses are eliminated, such as steam leakage losses. When used as a replacement for through-wall or window air conditioning, losses such as air leakage and sleeve conduction are eliminated. Converting to heat pumps also allows the new electricity use to be offset by renewable energy sources, such as solar photovoltaic systems.

Heat pumps can obtain their heat from the ground (referred to as geothermal or geoexchange systems) or from the outdoor air (referred to as air source systems). Variable refrigerant flow (VRF) systems refer to heat pumps with variable speed compressors, which deliver heating and cooling at high efficiency by varying the compressor speed, and can deliver the required capacity by speeding the compressor up when outdoor air temperatures reach extremes in summer and winter.
Pulling it all together

They are also an excellent complement to the traditional approach of high-efficiency product replacements. There is no reason that right-lighting cannot be done with new LED lamps, for example, delivering both the savings of right-light and the savings of efficient lamps.

In some cases, load-reduction energy improvements can take more up-front effort. To do an inventory of lighting in all the spaces in a building takes more time than just to say, “Replace all T12 lamps and ballasts with T8 LED lamps.” But this effort more than pays for itself in added energy savings. And the added effort is typically not great. A room-by-room lighting inventory rarely takes more than a few hours for a whole building.

Traditional approaches to energy conservation have led to a focus on one-for-one replacement of energy-consuming devices, and have often ignored load-reduction strategies, such as right-lighting, stack-effect reduction, and replacing central heating and cooling systems with distributed systems such as ductless heat pumps. Load-reduction strategies can take a little more up-front planning, but offer energy savings that can last the full future remaining life of a building, maybe a century or more.

Ian M. Shapiro is the founder of Taitem Engineering, Ithaca, N.Y., and the author of the recently released book “Energy Audits and Improvements for Commercial Buildings.” He can be reached at imshapiro@taitem.com. 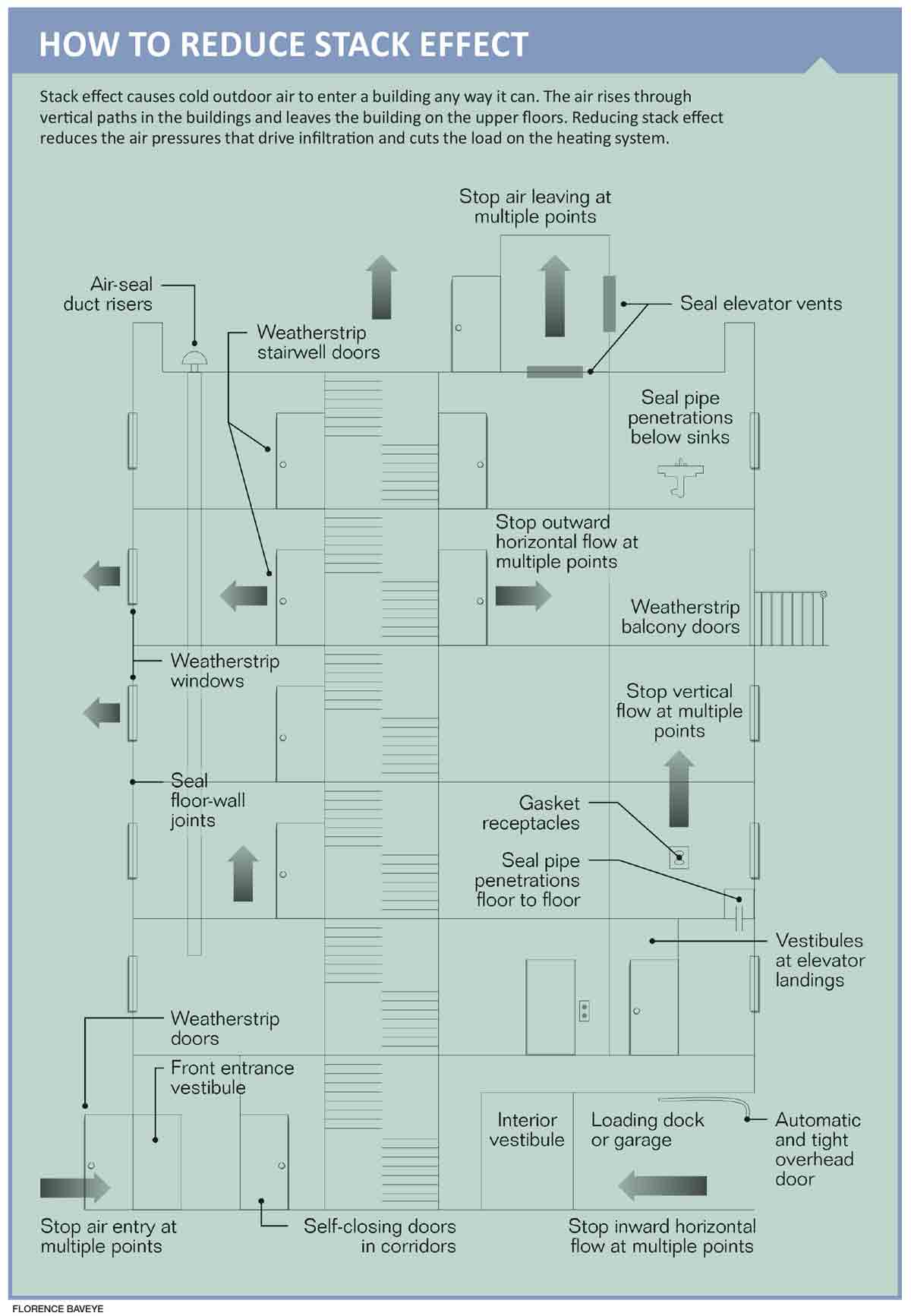